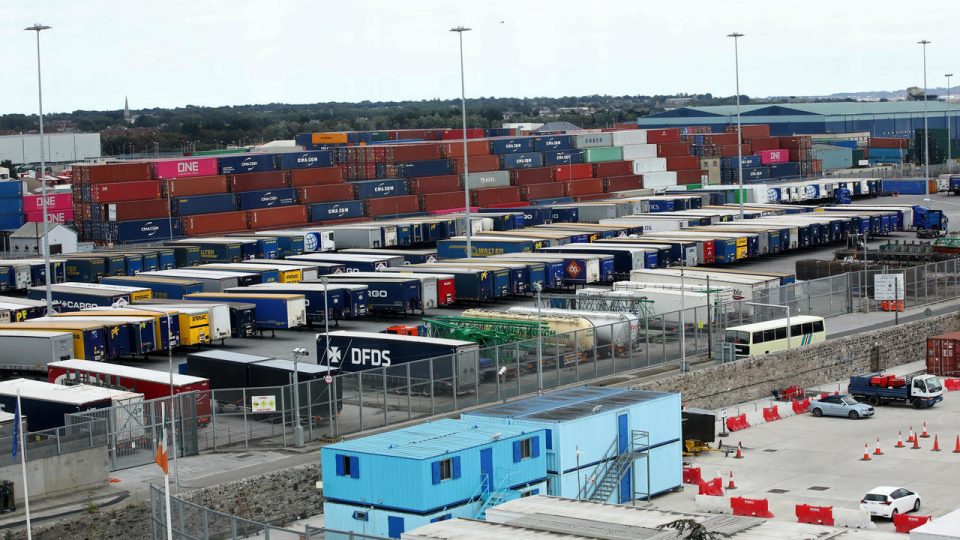 Ireland has ramped up direct shipping routes to mainland Europe since the end of the Brexit transition period, seeking new passages to the EU bypassing freight jams feared at UK borders.

Every year 150,000 trucks use the “UK landbridge” to transport three million tonnes of freight between the Republic and the European mainland.

Trucks sail by roll-on/roll-off (ro-ro) ferries from Irish ports and mainland Britain, driving onwards to shipping hubs in southeast England, then on to continental Europe.

Britain left the EU in January last year, but remained bound by the bloc’s rules until December 31 as it sought to define the terms of its new relationship with Brussels.

Even though tariff- and quota-free trade was secured in a last-minute deal, Britain’s exit from Europe’s single market and customs union meant an end to frictionless freight transit through UK-EU port borders.

“Declarations, regulatory checks, controls… will now be a factor because the UK has left the EU,” warned Tom Talbot, of Irish Revenue, at Dublin Port on Monday.

“Because of that there will be delays.”

Many Irish hauliers are already charting new routes guaranteeing freight remains inside the single market and customs union, and outside the scope of delay.

Rosslare Europort — Ireland’s second busiest freight hub — is already running 28 weekly services to or from mainland Europe, up from 10 before the end of the Brexit transition.

In December, Swedish firm Stenaline brought forward plans to double sailings between the southeastern town and Cherbourg in northern France, as coronavirus restrictions blocked lorries entering the country from Britain.

And on Saturday, Danish shipping firm DFDS opened a new route to the French port of Dunkirk, sailing six times weekly in each direction.

All three ro-ro ships departing direct to France on Saturday were fully booked.

Port manager Glenn Carr said on that day alone, Rosslare “more than doubled” the freight moved to mainland Europe throughout the whole first week of 2020.

“Demand for those services has been extremely strong”, he told AFP.

A further weekly sailing to and from the continent is planned for later in 2021 and Carr said “potential extra services” are already being considered.

At Dublin Port — Ireland’s busiest hub — new services to continental Europe have been phased in since Britain voted to leave the EU in 2016.

In 2018 and 2019 Luxembourg firm CLdN brought “Brexit-busting” ro-ro ships the MV Celine and MV Laureline to the capital’s harbour.

They are the largest freight ferries sailing from the port and travel to and from Zeebrugge in Belgium and Rotterdam in the Netherlands.

In 2018, Dublin Port said it was already seeing a shift as “fast-moving consumer goods” and “temperature-controlled foodstuffs” vulnerable to delays moved onto these routes.

Government agency the Irish Maritime Development Office (IMDO) told AFP that at ports across the nation “there were four new continental ro-ro services introduced in 2020”.

The IMDO and Irish government have urged logistics operators to “prepare to switch to direct routes to the continent” in case of post-Brexit disruption.

Because these new paths circumnavigate the UK they naturally take longer.

The new Rosslare to Dunkirk route spends 24 hours at sea while a Dublin to Dunkirk trip via the UK landbridge theoretically takes around 13 hours.

The margin is thin enough that the prospect of further delays at checks in Irish and French ports sandwiching Britain may be off-putting.

Lorry drivers also arrive on the continent fully rested, with a large chunk of driving time open to them to make a speedy arrival at their final destination.

The initial days of the new post Brexit transition period were quiet in Dublin Port — a result of festive period closures and heightened coronavirus restrictions.

Ireland’s department of transport said there was also evidence of businesses stockpiling in December, anticipating post-Brexit port disruption which has not yet materialised.

However the capital hub is expecting a steady return to normal traffic in the coming days and weeks, with the first large-scale test of checks on goods transiting the new EU-UK border.

Only then will the scale of delays become fully apparent — and Irish hauliers can decide whether to cut out the middleman of post-Brexit Britain for good.

UnitedHealth to pay nearly $8B for technology company Change