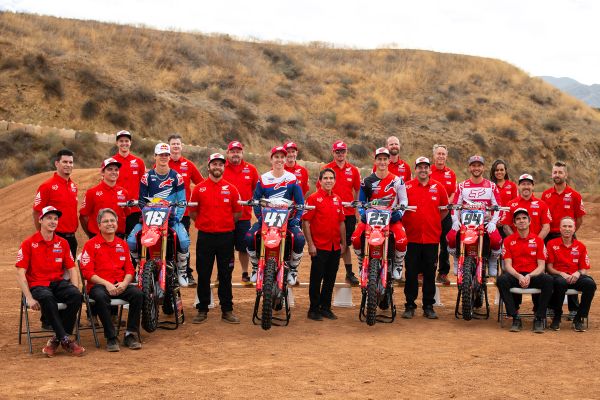 German Ken Roczen begins his fifth year with Honda’s factory team after winning four rounds in last year’s series. “I’m in a good position right now and excited to build on what we learned last year,” Roczen said in the presentation. “I feel extremely comfortable on the all-new CRF450R and will work hard to put it on the top step in 2021.” 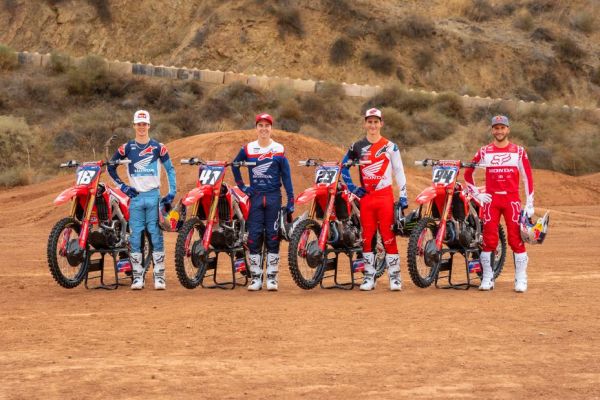 Making his AMA Supercross debut aboard the factory 2021 CRF450R is 2019 and 2020 250SX East Region Champion Chase Sexton, who joined the squad for last year’s AMA Pro Motocross series, performing well and winning the final round. “I learned a lot racing the 450 outdoors last year,” Sexton said. “I’m excited to take that momentum into Supercross, and I feel like I can contend for race wins and podiums.”

As previously announced, the factory squad has taken on the 250 effort for 2021, with CRF250R-mounted Australian brothers Jett and Hunter Lawrence prepared to campaign the 250SX East and West regions, respectively. “All of the hard work is paying off,” said Jett, who is beginning his second full season as an AMA pro.

“Now, going into the season, I just want to be consistent and ride smart—to ride like a champion and be there for every race.”

Jett’s older brother Hunter missed much of last season due to injuries, but he is approaching the 2021 season in good health and looking forward to

a new challenge. “Having this opportunity alongside Jett is great, because we push each other every day,” Hunter said. “Team Honda HRC has welcomed us with open arms and I just can’t wait to get the season underway.”

The first round of the 2021 AMA Supercross series takes place in Houston on January 16.

The presentation can be viewed on demand here.


The Monster Energy AMA Amateur National Motocross Championship episodes two and three will premiere on MAVTV tonight at 6 & 6:30 pm ET. Relive all the action from the 2020 Amateur National at Loretta Lynn’s with race highlights, rider interviews and more from the Ranch. more >>


A Total of $2,250 Contributed to the Pioneering Philanthropic Effort to Provide World Class On-Site Medical Assistance at America’s Preeminent Championships As an innovator in the ongoing endeavor to make helmets safer and m more >>


Monster Energy Star Yamaha Racing is pleased to announce the addition of Malcolm Stewart to their 450 team for the 2021 Monster Energy AMA Supercross season. The 2016 250SX East Champion will line up alongside the 2018 250SX West Champion, Aa more >>


Yamaha Wishes Beaubier Well in His Pursuit for a World Title


After a successful nine-year tenure with Yamaha in the U.S. National road racing championship, Yamaha Motor Corporation, USA, has released Cameron Beaubier from the second year of his contract to allow him to pursue his dream of a World title. The five-time more >>

In the midst of a year filled with unpredictable challenges that yielded a cloud of uncertainty over the entirety of the 2020 season, the Lucas Oil Pro Motocross Championship, sanctioned by AMA Pro Racing, completed a successful and captivating campaign. more >>


MX vs ATV All Out Fox Raceway National Specialty Awards


Deltran Battery Tender RC Hard Charger Award & FMF Privateer Power AwardIt was a day of celebration at the final round of the 2020 Lucas Oil Pro Motocross Championship. In the midst of unprecedented uncertainty emerged an exceptio more >>


Yamaha Motor Corporation, USA (YMUS), is pleased to announce a three-year partnership with the Monster Energy Star Yamaha Racing team to field their campaign in both the 450 and 250 classes of the Monster Energy AMA Supercross and Lucas Oil Pro Motocross Championships. more >>


Tickle Finishes Out The Season Inside The Top-10 at Fox Raceway, results


Monster Energy Yamaha Factory Racing Team’s Broc Tickle closed out the 2020 Lucas Oil Pro Motocross season with a ninth-place overall (8-9) at a fast, dry Fox Raceway in Pala, California. Justin Barcia had a solid qualifying effort in the eighth, but ultimately pulled out the motos not feeling 100 percent from his injuries sustained at the previous round at Thunder Valley. more >>


Jake Gagne took podium honors for the Monster Energy Attack Performance on Saturday in an incident-packed Race One at the Indianapolis Motor Speedway in Indiana, which saw two red flags and three restarts. Teammate and championship points leader Cameron Beaubier had an eventful race in which he led but ultimately crashed out.
more >>


The 2020 AMA Pro Motocross Championship concluded on Saturday in the heart of Southern California’s motocross industry with the Fox Raceway National, where Red Bull more >>


After a highly competitive season the 2020 Lucas Oil Pro Motocross Championship has come to an end. The season finale from Southern California’s Fox Raceway was a historic one, as a pair or new race winners and a pair of new national champions emerged at the MX vs ATV All Out Fox Raceway National. more >>


First Time Winners and Champions Prevail at Fox Raceway           In the face of the unprecedented uncertainty that surrounded the 2020 season the Lucas Oil Pro Motocross Championship, sanctioned by AMA P more >>


How to Watch: MX vs ATV Fox Raceway National


After a season filled with exceptional competition the 2020 Lucas Oil Pro Motocross Championship is set to crown a pair of AMA National Champions on Saturday. The season-ending MX vs ATV Fox Raceway National, presented by Fox Racing, will bring the world’s best racers to sunny Southern California and the familiar confines of Fox Raceway, which serves as a popular test track for the sport’ more >>


As expected, the eighth and penultimate round of the 2020 Lucas Oil Pro Motocross Championship was brimming with intensity as the title fights in both the 450 Class and 250 Class move one step closer to completion. Perfect conditions and the high altitude of Thunder Valley Motocross Park made for an action-packed afternoon of racing at the WPS/FLY Racing Thunder Valley National. more >>


Estenson Racing’s Dallas Daniels moved closer to sealing the deal on his first Progressive American Flat Track AFT Singles Championship with a down-to-the-wire victory in Saturday night’s Atlanta Short Track II. Unfortunately for the rest of the team, it was a tough night on the slick clay track in Woodstock, Georgia. more >>


Monster Energy Yamaha Factory Racing Team’s Justin Barcia and Broc Tickle both collected solid Moto 1 finishes but unfortunately had issues in Moto 2 to finish outside the top 10 at Round 8 of the Lucas Oil Pro Motocross Championship in Lakewood, Colorado. Ba more >>


Monster Energy Star Yamaha Racing’s Justin Cooper came into the penultimate Lucas Oil Pro Motocross round at the Thunder Valley MX Park with a win as the goal. It came to fruition for the New Yorker who finished the day on top with a 2-1 moto score. The 250MX points leader, Dylan Ferrandis, maintained his points lead with only two motos remaining this season, following a 1-3 moto result f more >>


Dallas Daniels continues to distance himself from the competition as the season hits the final stretch. The Estenson Racing rider scored his fourth-consecutive win Friday night at the Atlanta Short Track I to extend his points lead in the Progressive American Flat Track AFT Sin more >>


How to Watch: WPS/FLY Racing Thunder Valley National on Saturday


The 2020 Lucas Oil Pro Motocross Championship continues tomorrow with the WPS/FLY Racing Thunder Valley National on October 3. Colorado’s Thunder Valley Motocross Park will be the site of the eighth round of the championship, where the world’s best riders will tackle the mile-high altitude of the track, which sits at the highest elevation of any other professional motocross venue in the w more >>


Daniels, Rush Storm to Another 1-2 Finish for Estenson Racing


Dallas Daniels strengthened his bid for the AFT Singles crown with another dominant victory Saturday night at the Dallas Half-Mile II, in Mesquite, Texas. His teammate Mikey Rush joined him on the podium for a stellar Estenson Racing 1-2 finish at Round 10 of the Progressive American Flat Track Series. On the AFT SuperTwins side of the tent, JD Beach returned to a top-10 finish. Kol more >>


Ferrandis, Cooper Bring the Heat with a 1-2 Finish in Florida


Monster Energy Star Yamaha Racing’s Dylan Ferrandis set a blistering pace to win both motos at the WW Ranch National and expand his points lead in the Lucas Oil Pro Motocross 250MX Championship. His teammate Justin Cooper joined him on the podium with two solid moto finishes (4-2) for second overall. Shane McElrath battled through the challenging conditions to take a top-five with a more >>

How oil and gas recovery will impact procurement and supply chain