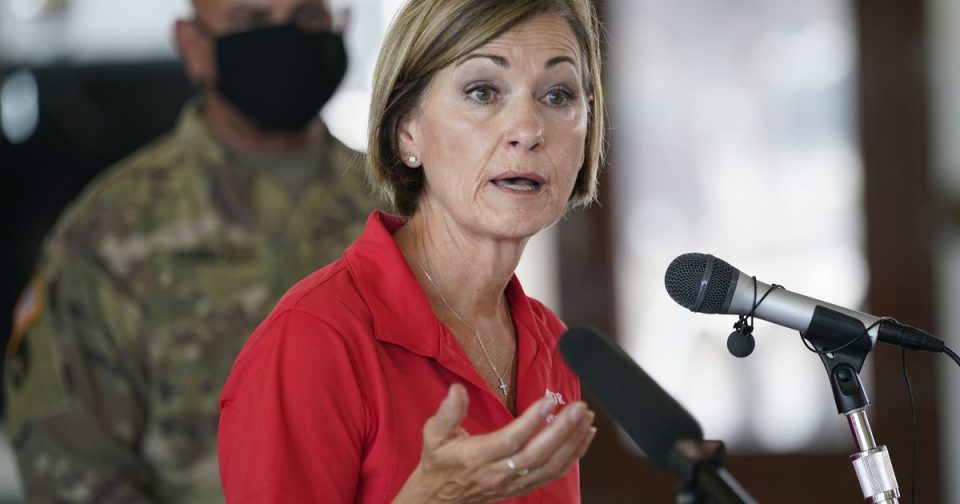 The video put a positive spin on their response to the virus, which has caused more cases and deaths per capita in Iowa than most other states.

(Charlie Neibergall | AP) Iowa Gov. Kim Reynolds speaks during a news conference, in Cedar Rapids, Iowa, Aug. 14, 2020. Reynolds and four top Iowa officials cooperated in making a marketing video for a company that has received no-bid contracts during the state’s coronavirus response. The arrangement between the state and Utah-based Domo Inc. has raised allegations of favoritism and improper use of public resources.

Iowa City, Iowa • Iowa’s governor and four aides helped make a marketing video for a Utah company that was awarded no-bid contracts for work on the coronavirus pandemic, a move that has raised allegations of favoritism and improper use of public resources.

The appearances go against long-standing guidance to avoid any hint of preferential treatment in relationships with contractors. The video put a positive spin on their response to the virus, which has caused more cases and deaths per capita in Iowa than most other states.

Domo’s website removed the video and other Iowa-based marketing materials on Thursday, hours after The Associated Press reported on them.

State Hygienic Laboratory director Michael Pentella said through a University of Iowa spokesman that he was asked to participate in the video by the governor’s office and was not told how the material would be used. Pentella’s appearance — in which he calls Domo “a great planning tool” — may contradict a university policy limiting product endorsements.

Domo, which helped launch the governor’s signature COVID-19 testing program, featured the video and other materials in a case study for prospective customers. It asked, “What if data could stop a viral hot spot?”

One lawyer experienced in state government said the video — which includes shots inside the Capitol and other state buildings — was “shameful on several grounds” if not illegal.

“To cut a commercial for a private company is way beyond established norms,” said attorney Gary Dickey, who was general counsel under Democratic Gov. Tom Vilsack.

He said it “smacks of cronyism” for the governor to endorse any specific product or company, especially a vendor picked through a non-competitive process.

Reynolds spokesman Pat Garrett said Domo “wanted a testimonial on the success of Test Iowa” and the governor and others agreed to participate. He said Reynolds was proud of the public-private partnership’s delivery of testing supplies, data analytics and contact tracing.

Unlike federal law, Iowa statutes do not ban government employees from using their positions and titles to promote for-profit companies.

Iowa law does bar the use of state property “for any private purpose and for personal gain, to the detriment of the state.” Another law, signed by Reynolds, bans state officials from using taxpayer dollars for self-promotion.

Garrett claimed no state resources were used to make the video, which also featured Department of Transportation Director Scott Marler.

State Auditor Rob Sand said Thursday it was “shocking” Pentella had been asked to use his time to promote a private entity without full transparency. Referring to the governor’s office role in the video, he said the “legality of this action certainly deserves additional scrutiny.”

Iowa’s procurement manual says employees must adhere to ethics standards from the National Institute of Governmental Purchasing, which call for fairness and consistency in the treatment of all vendors and outlaw “anything that enhances, or appears to enhance, self-interest.”

The six-minute video has been online for over two months — as Domo’s performance has faced some criticism.

Local health officials told The Gazette that Domo’s new contact tracing software was hard to use and that its November launch hindered their response during a surge in cases. Iowa has yet to release Domo’s dashboard to track vaccinations, weeks after the first shots were given.
In April, Reynolds’ administration awarded an emergency $26 million contract to Domo and two other Utah companies to launch Test Iowa. The deal included 540,000 test kits supplied by Nomi Health, an online health assessment developed by Qualtrics and software and data from Domo.

In July, Trombino signed a revised agreement with Domo that will pay $3.6 million for Iowa’s use of software to manage COVID-19 data, the contact tracing app, and the vaccine dashboard.

By population, Iowa is 5th in the number of confirmed cases and 47th in testing, according to data tracked by Johns Hopkins University. Garrett said Iowa’s rate of testing is much higher when comparing overall tests, not individuals tested.
The governor in April revealed that the Utah companies were selected after she pursued a tip from actor Ashton Kutcher, an Iowa native who is friends with Qualtrics’ founder.

Domo’s video paints the partnership’s origin as well-planned and its outcomes as highly successful.

Trombino says he started discussing the pandemic last January and his talks with Utah officials were “the key ingredient for us to make that decision.” He says Domo’s software integrates data from different sources “faster than I ever thought” possible.

Reynolds claims the data allowed her to allocate testing resources to virus hot spots while lifting most restrictions on gatherings and businesses. She said it “gave me the confidence that I needed to open up our economy and get individuals’ lives and livelihoods back on track.”