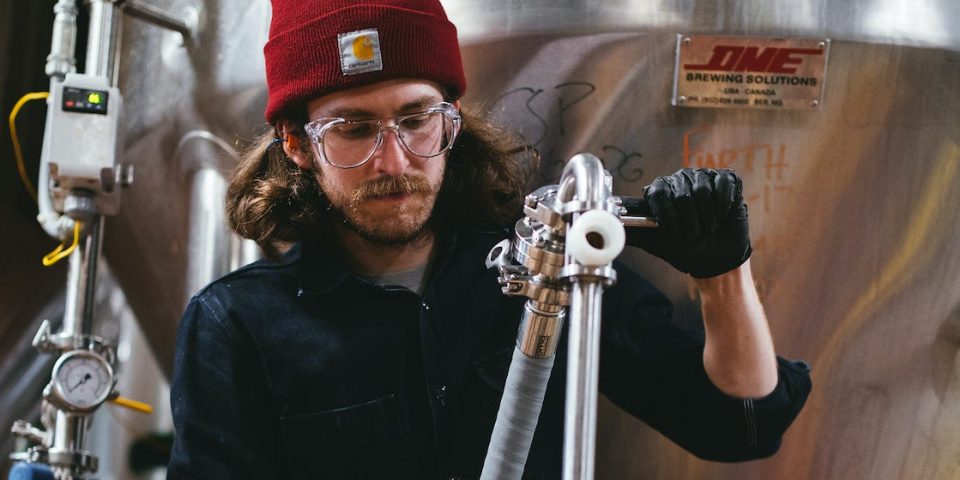 Cofounders Burns, O’Mara, and Oxton used this 3-barrel steel vessel to brew their first batches of beer in their apartment in Somerville

Night Shift Brewing was founded as a company in 2012, and now offers a rotating selection of roughly 100 unique craft beers through their distribution company, taprooms, and pop-up beer gardens in the greater Boston area.

In just 2 years they were out of space and had to move again. When they opened their current 20-barrel location, production jumped 7X.

The founders own 80% of the company and the remainder is owned by friends and family who helped get the business started. Burns says his relatives regret not taking a bigger stake: “They were like, ‘I wish I put in 10-times what I gave you … You didn’t ask for my money hard enough!'”

The new space enabled them to experiment with other aging techniques, such as these old bourbon barrels…

…and these former wine Foudre vats from Napa Valley, California

The massive containers hold vastly more than a traditional barrel for aging brews.

The warehouse was formerly a dance and gymnastics center

The adjacent warehouse was a cheese-packing plant with a massive refrigerator that Night Shift uses to store finished beer and perishable ingredients like yeast, hops, and raspberry puree.

One recipe that a Night Shift employee developed called for a sequence that went against some conventional rules of German brewing. The brewers had to convince the equipment company to reprogram the machine in order to complete the process.

Whatever you do, don’t push the green button

The new equipment allows brewers to run and monitor almost the entire process from a smartphone.

The Everett facility is also home to the Night Shift tasting room, where beer-lovers can try the latest offerings on tap

In addition to the beer gardens, Night Shift built a following with social activities like fun runs, yoga, and a paws-and-pints charity event for animal lovers.

The Owl was quickly associated with mainstay brews and experimental concepts

Whirlpool Pale Ale is Burns’ personal favorite, while smaller batches have a following he describes as “culty.”

“Fluffy is a super saturated New England style IPA, and we do a pretty popular imperial barrel-aged style called Darkling,” Burns said. “We’ve also done a ton of weird beers that also have like their own niche subgroups.”

Viva Habanera, flavored with agave nectar and hot peppers, is “for people who go who collect hot sauces,” he added.

For a few years, the company offered a Barrel Society program where members could receive the latest creations for a one-time subscription

The program started with 200 subscribers who got special perks like t-shirts and glassware, and the $250 payments up front gave Night Shift much-needed cashflow in those early days of growth. But the program got too popular to continue. “When it got to 2000 people it was so hard for us to manage,” Burns said. “It kind of crumbled under its own weight.”

Further expansion is in the works, with a new facility planned in Burns and O’Mara’s hometown of Philadelphia.

The new space will give Night Shift an additional 130,000 square feet of production space, positioned closer to more of the US market. “It’s a kind of a homecoming,” Burns said.

It’s possible that the company could grow even faster, but the founders say they are most interested in taking the time to do it right.

“We’ve done a number of things through the years to help create a tribal community around Night Shift,” Burns said. “We’re definitely not marketing masterminds, but I think it’s just about being genuine, honest, and transparent.”

Analysts are on the Bearish side about Genpact Limited (NYSE:G) this week.