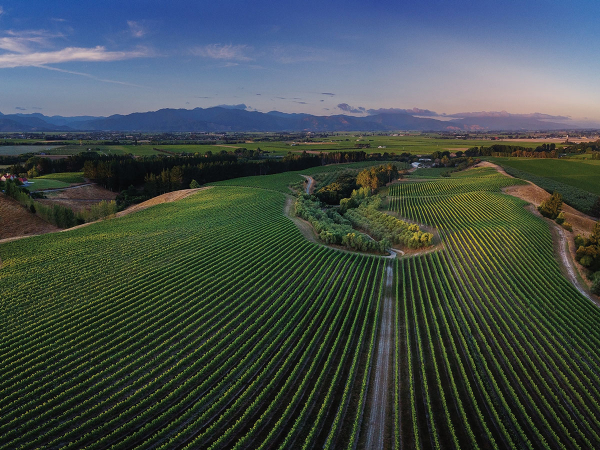 General Manager Matt Sutherland has been working with carbon management company Ekos since 2019, seeking guidance on measuring and reducing emissions, while growing carbon credits through exotic and native plantings on the property.

The company is far from starting from scratch in this in-situ sequestration, thanks to three decades of tree plantings by Matt’s parents Ivan and Margaret Sutherland and their Dog Point partners James and Wendy Healy, who’ve worked to ensure the vineyard – the largest organic grape producer in New Zealand – is a beautiful home for family and staff alike.

Vines are nestled within a plethora of plantings, including hillsides of olives, banks of Tasmanian blackwood, a pine nut grove, smatterings of oaks and more than 10,000 native trees, flax, grasses and bushes. When the Sutherlands began to develop the former farm in 1991, the stream running through it was choked by weeds and willows. That’s hardly imaginable now with Mill Stream cloaked in slick green flax, flourishing shrubs and stands of native trees.

None of those plantings had climate action in mind, and not all of them can be registered for carbon credits, but the Dog Point team are beginning to look at their amenity areas with a new lens, seeing opportunity to align the company philosophy with a global imperative to cut emissions and tackle climate change.

Perhaps the biggest opportunity for insetting is a 3-hectare block of radiata pine the Sutherlands planted in 1993, which will be harvested this winter. In its place, and slightly beyond, Dog Point will strategically plant a 5ha forest carbon sink, based on a variety of options proposed by Ekos founder Sean Weaver.

They range “from hell for leather” plantings of high-density natives, costing hundreds of thousands of dollars, to a less intensive long-term plan, with a mix of pine (cheaper to plant and maintain) and natives, including totara and manuka chosen for their practicality and sequestration value. Over time, there would be more natives and fewer pines, with the profitability of the exotics enabling the expansion of indigenous trees, Matt told the New Zealand Winegrowers Tackling Climate Change webinar in June.

If Dog Point registers the new forest with the ETS next year, they could start tapping into credits by 2033, following the necessary 10-year redundancy period after harvesting the original pines. “There’s something nice about starting that journey and working towards that,” says Matt. The process will be expensive, but can be spread out over a long period, and the company is actively doing something “in the right way”.

Dog Point Vineyards’ total carbon emissions currently sit at 570 tonnes of CO2 per year, with 272 tonnes of that down to diesel, and 69tCO2 to sea freight, while the 30 cattle grazing their hill country are responsible for a whopping 29tCO2, compared to the 9tCO2 generated by 3,000 head of sheep. Some organic methods come with a carbon cost, with the need for more tractor passes, perhaps, and cattle grazing hillsides, but are an integral part of the company’s ethos of enhancing soil health, says Matt.

Offsetting their current footprint through the purchase of carbon credits would cost around $36,000 per year, and to be climate positive (offsetting 120% of emissions) would be $43,000. They’re daunting numbers to add into a budget, particularly considering increasing costs of production and the challenges of recent years, says Matt, who emphasises the need for a financially viable solution. “It’s about doing the right thing, but also trying to make sure its financially sustainable.”

Limiting offsetting to Dog Point’s own label, which takes 35% of the company’s fruit, would reduce the carbon cost to 240 credits at $12,000 to $15,000 a year, but his aspiration is ultimately to have net zero carbon grapes at the farm gate.

Insetting on areas already allocated to trees, either with the existing plantings or replacements with sequestration-focussed species, means Dog Point could manage a good chunk of its ETS accounting inhouse. There’s a total of 13ha of plantings or potential plantings to be registered, allowing the company to generate around 110 credits a year, when taken over an average of 30 years. That’s 19% of the current offset they require to be carbon zero for the whole vineyard, or 50% of the portion of the business under the Dog Point Vineyards label.

And the emissions numbers will reduce as the company progresses its plans, starting with low hanging fruit and moving to capital-heavy solutions, such as solar panels, over time. Electricity accounts for nearly 25 tonnes of their emissions, and up to 90% of that is consumed in the winery, so solar “is a very real option in terms of reducing our carbon emissions”, Matt says.

When he contacted Ekos in 2019, he knew very little about carbon accounting, cutting and credits. Three years on they are growing their understanding, have a registered carbon emissions business, and have started on a game plan. “We have measured and understand what it is. And we understand there is now an obligation to reduce. We have a start point effectively,” says Matt. From here on in, the reduction philosophy will be akin to sustainability in the company, which he looks at like health and safety – a simple and unassailable expectation of day-to-day business.

Speaking in the NZW webinar series, Ekos Senior Carbon Analyst May Chang explained that insetting means companies are not vulnerable to fluctuations in the carbon credit price. However, it’s “not for everyone”, because of the capital required to own the land, plant trees and do pest and weed control, as well as the verification process, including having someone survey the site so the amount of credits each year is as accurate as possible. That means companies need to undertake good feasibility studies to ensure it is worth the investment.

“It’s not for the faint hearted… but I feel like it’s not as daunting as it seems,” says Matt. “It’s almost a continuation of what we are doing, but a few decisions to steer you in a new direction. That’s where Ekos has been really useful to us.”

Bugattis, Lamborghinis in ‘Felicity Ace’ Ship Fire to Be Replaced