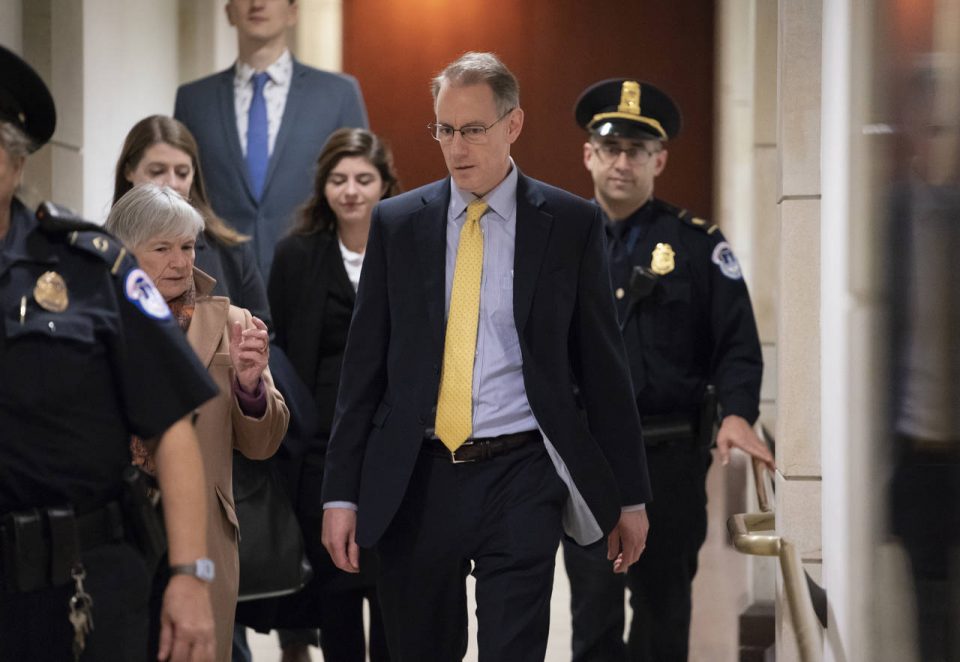 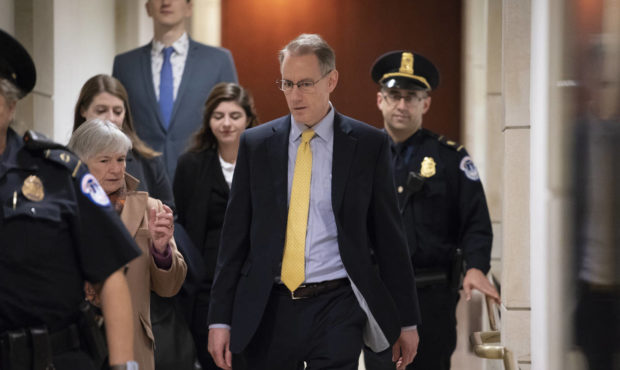 Mark Sandy, a career employee in the White House Office of Management and Budget, arrives at the Capitol to testify in the House Democrats’ impeachment inquiry about President Donald Trump’s effort to tie military aid for Ukraine to investigations of his political opponents, in Washington, Saturday, Nov. 16, 2019. (AP Photo/J. Scott Applewhite)

After a week of dramatic public hearings, investigators heard late Friday in closed session from State Department official David Holmes, who delivered a firsthand account that puts the president at the forefront of events.

Holmes, the political counselor at the U.S. Embassy in Kyiv, testified that he overheard Trump in a phone call with his European Union ambassador, Gordon Sondland, saying he wanted Ukraine to conduct investigations. Sondland later explained the investigations pertained to “Bidens” — a reference to former Vice President Joe Biden and Biden’s son Hunter, who served on the board of a gas company in Ukraine. No wrongdoing by either Biden has been substantiated.

It was one of the first direct accounts of Trump seeking investigations of a political rival and provides Democrats with a counterargument to Republicans, who dismiss the testimony so far as largely hearsay from diplomats and others with, at best, secondhand knowledge of events.

Sharpening the arguments, both sides are preparing for an intense lineup of public hearings in the coming week. Americans are deeply split over impeachment in a historic test the Constitution’s system of checks and balances.

Pelosi, in an interview to air Sunday on CBS’ “Face the Nation,” said Trump “made a mistake” by live-tweeting his criticism of Marie Yovanovitch, the U.S. ambassador to Ukraine he ousted, during her public testimony Friday. Democrats said that amounted to witness intimidation.

Pelosi acknowledged that presidents are able to nominate and dismiss ambassadors. Trump “should not frivolously throw out insults, but that’s what he does,” she said. “I think part of it is his own insecurity as an impostor. I think he knows full well that he’s in that office way over his head.”

In a speech Friday night, Attorney General William Barr said congressional Democrats were pursuing “scores of parallel investigations through an avalanche of subpoenas” that are “designed to incapacitate the executive branch.”

Barr, who favors an expansive view of executive power, said that “the cost of this constant harassment is real.”

The latest witness Saturday was Mark Sandy, a White House budget officer, as Democrats scrutinize the administration’s decision to withhold military aid from Ukraine while Trump pushed the country’s new president for the political investigations.

Sandy was the first official from the Office of Management and Budget to defy Trump’s instructions not to testify. Like others, he received a subpoena to appear.

Questions over that trade-off — military aid and a coveted White House visit for Ukraine’s president in exchange for the investigations — are central to the impeachment inquiry. Trump says he did nothing wrong.

“When people come in, we learn more,” said Rep. Eric Swawell, D-Calif., a member of the House Intelligence Committee, as he arrived for Saturday’s session.

Rep. Mark Meadows, a top Trump ally, said he did not expect to hear much from Sandy, a career budget official.

“All I expect him to say is he doesn’t know why the aid was held and wished that he did,” said Meadows, R-N.C. “But I may be surprised.”

Oilers’ college procurement could increase under Ken Holland – The Athletic