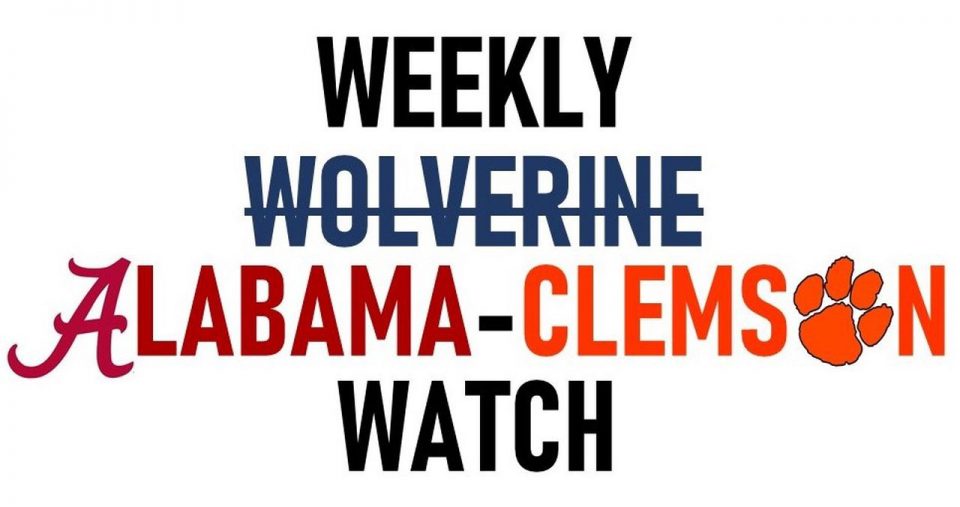 COLUMBUS, Ohio — Welcome to Week Five of Clemson-Alabama Watch on the road to the College Football Playoff.

Alabama and Clemson have been the measuring sticks of college football in the playoff era, with each making all but one.

The Crimson Tide missed for the first time in 2019 while the Tigers missed in 2014. The two are joined by Ohio State football and Oklahoma as teams with multiple trips, but there’s a clear gap between the Tide/Tigers and everyone else. But while both programs have found success, they have done it in fashions that are almost polar opposites.

“One is a factory, one is a family,” commentator Joel Klatt said on the Colin Cowherd show following the 2018 title game. “Neither is better than the other. Both can win.”

The Buckeyes have been a distant third while operating somewhere in the middle of the two extremes. Under Ryan Day, is that approach about to pay off?

Since arriving in Tuscaloosa in 2007, Saban has gone 158–23 — 92–15 in the SEC — and won five titles, six SEC championships and eight straight recruiting crowns. He’s clearly been the coach of the decade, while doing so with a variation of assistant coaches, players and offensive approaches.

Ten Saban assistants have gone on to be head coaches, and none have yet beaten the master. All but one enter the 2020 season as head coaches, with Kirby Smart holding the biggest job at Georgia.

Despite the coaching turnover, elite players still come to Tuscaloosa. They know what they’re seeking, and changes in the staff doesn’t change that. For the Crimson Tide, assistant coaches have goals of being head coaches, players have goals of reaching the NFL. Each helps the other accomplish that dream.

This is not to say that Saban doesn’t care about his players. It’s saying how often do you see a guy who is clearly a top draft pick come back for another season because of “unfinished business”?

How many coaches have you seen pull a player at halftime of a championship game — a player who’d been to the playoffs every year and was a reigning national champion only to be replaced by a true freshman with a total of 53 collegiate passes? Coaches make business decisions all the time, but replacing Jalen Hurts with Tua Tagovailoa was a call that only a football factory could pull off.

Those types of decisions are why Saban’s record is what it is at Alabama and why he has five rings.

That many recruiting titles to go along with 33 draft picks proves that players are OK with it.

Dabo Swinney was originally an in-house hire who took over in 2008 for a failing program when Tommy Bowden resigned. He finished the season 4-3 before slowly building a national powerhouse.

The Tigers are 137-32 — 83-17 in the ACC — during a tenure that includes six ACC championships, two CFP titles and five straight trips to the postseason.

Holding onto coordinators whose resume should put them in high demand is a different level of success. When Clemson won its second CFP title in three years in 2018, coordinators Tony Elliott (fourth year), Jeff Scott (11th) and Brent Venables (seventh) had displayed remarkable longevity with the school. Scott is the only one who has since left, becoming South Florida’s head coach after last season.

Venables is arguably the best defensive coordinator in college football, while Elliott is one of the nation’s most respected offensive coordinators. Both have certainly turned down offers. The reasons, in some fashion, must have included the allure of regular national contention.

That same thought process is why the Tigers’ defensive front returned after a disappointing finish to the 2017 season to win a title in 2018. The players included three first-team All-Americans in Christian Wilkins, Clelin Ferrell and Austin Bryant along with Dexter Lawrence. They carried sure-fire tickets to join the pros. A similar scenario at OSU would have led to Chase Young, Jeff Okudah and J.K. Dobbins coming back after losing in the 2019 semifinals. Offensive guard Wyatt Davis came back for that reason for the Buckeyes, and so did Shaun Wade, but he also needed to prove himself as an outside cornerback.

Clemson’s quartet came back because the appeal of a fourth try at the brass ring was convincing. There are exceptions — Trevor Lawrence will likely leave early as did Dashaun Watson. Perhaps Lawrence’s backup, D..J. Uiagalelei, will do the same.

Isaiah Simmons was a three-star recruit rated as the No. 451 player and No. 25 safety in 2016, yet he developed into a once-in-a-generation player who’s become the standard teams look for today. That’s the type of player Clemson was built on and why it’s found success while only having one top-five recruiting class. Because this is a family, and that’s what they signed up for.

Let’s look at Ohio State as if it were a start-up business:

Urban Meyer and Ryan Day: Man (Meyer) starts a business. That business becomes successful on a national scale, and man makes millions off it. He runs said business until it exhausts him then names his most responsible and competent child (Day) as successor. He first puts him through a three-week trial period (the 2018 suspension) to make sure it’s a perfect fit. Now man watches from afar as successor builds on his accomplishments. He’s off to a good start.

Brian Hartline, wide receivers coach: Kid grows up surrounded by the business, so he already knows the ins and outs before running to the big city after college to chase his dream. He finds success, makes millions and then when he’s done, comes back to help run the family business.

Corey Dennis, quarterbacks coach: He married into the family, so the argument can be made that he got some things earlier than he should’ve, but that’s one of the benefits of a family business. Now he gets to learn from the successor while watching over the business’s most essential department.

Larry Johnson, defensive line coach: Legend whose reputation proceeded his time with the company, but bringing him in took things to another level. While his tenure has made him family, his initial hire was more of a business decision. He develops his unit like a factory churning out top-five draft picks along with quality pros, but it’s his personality that often defines the relationship.

Kerry Coombs, defensive coordinator: Around when the business was at ground level and quickly built a reputation for his factory-like success in his department. His brief departure confirmed his value and gave him valuable experience. He returns having broadened his approach that worked so well the first time. He embodies the family-owned factory philosophy more than anyone on the staff.

A family-owned business extends loyalty to those who’ve been around for a while, giving them a fair chance when the time comes. That way, when Joe Burrow leaves for greener pastures, he still makes sure to thank you in his Heisman speech. That element is what “The Brotherhood” is built on.

The factory part is how Justin Fields ended up in Columbus. It’s how you land two quarterbacks in one recruiting class, follow it up with a five-star, then gain momentum to land the next generational player at the position in the next.

Alabama and Clemson have found success choosing one of the two approaches. Ohio State seems to be looking for the perfect balance. Players will be OK with it because that’s what they signed up for.

• Clemson, Alabama have set the bar for how the start of the Ohio State football season should look

• Does Jaylen Waddle’s injury leave Ohio State with the best receiver duo in the country?

• Alabama, Clemson and Ohio State have backup quarterbacks with bright futures, but there’s no substitute for NFL-ready talent

• Did Notre Dame’s win over Clemson make the No. 2 seed the most valuable spot in the College Football Playoff?

New Ohio State face masks for sale: Here’s where you can buy Ohio State-themed face coverings for coronavirus protection. A 3-pack is available on Fanatics for $29.99.

Why OSU vs. Indiana in a top-10 matchup is conjuring thoughts of a recent Buckeyes loss: Lesmerises

CFP predictor: Why Wisconsin is already more of a contender than you think

The Big Ten West is better than the East in 2020, but can it stay there? College Football Monday Madness

Bill Sniffin: COVID-19 Vaccine Is A Moon Shot! The Nation Should Celebrate

New freight service to Gothenburg – links to Norway and Poland