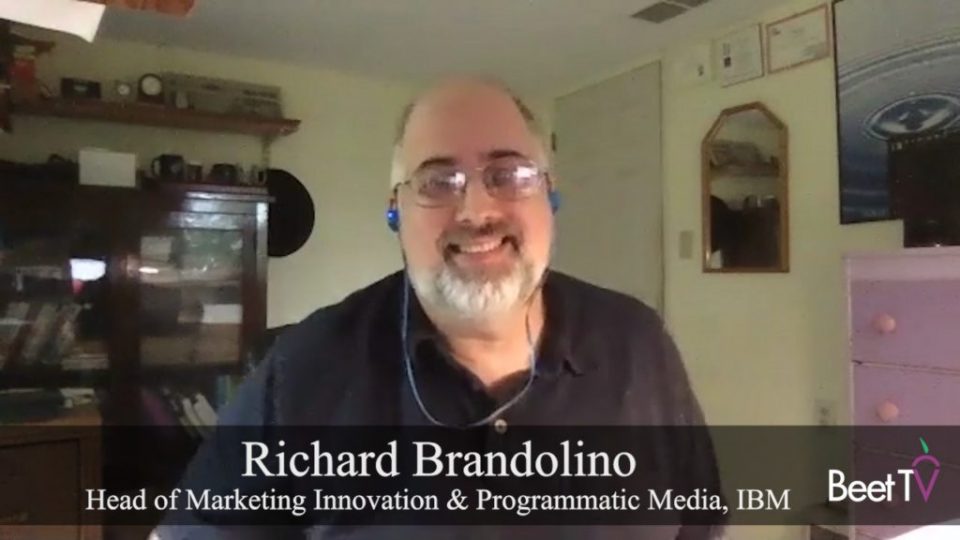 “Big Blue” wants to pull advertising out of the darkness.

IBM isn’t just operator of Watson, the AI engine being used to make advertising more efficient – it is also a big ad buyer in its own right.

In this video interview with Beet.TV, Richard Brandolino, Head of Marketing Innovation and Programmatic Media at the company, explains how that confluence prompted IBM to try fixing digital ad supply chain issues like fraud and lack of transparency.

“As we started really getting into the programmatic universe, we discovered, like a lot of other people, that we didn’t really have the visibility we wanted into the supply chain as a whole,” Brandolino says.

“As we started peeling that back, we found that some of the biggest problems were the things that were not disclosable.”

It is now four years since a hard-hitting ANA report, K2, blew the lid off practices in which US advertising agencies were accused of keeping up to 20% of clients’ media budgets for themselves after engaging in “pervasive” kick-backs and rebates.

That report kicked off more industry transparency about, well, lack of transparency – including large-scale efforts to shine a spotlight on how a series of “ad-tech taxes” along the ad-tech vendor chain are continuing to mean haziness and over-spend.

Despite the passage of time and effort, this year a PwC/ISBA report again made sobering reading, showing  out-of-control and overly-complex supply chains, with 15% of advertiser spend unattributed for after a procession of platform fees.

“(We) didn’t have clear vision on all the things that we were being double- and triple-charged for as multiple providers in the food chain we’re offering their value add – things like brand safety filters or anti-fraud filters,” IBM’s Brandolino adds.

Back to the Source

To solve the problem, Brandolino says IBM, in addition to working on its own technology, began liaising with MediaMath, the ad-tech platform vendor.

“That became the origin of the Source programme,” he says, referring to the partner ecosystem MediaMath brought together last year with goals of making media more addressable and accountable.

“MediaMath was having the same dialogues with multiple customers as we were starting to bring up,” Brandolino explains. “So we decided to work together to figure out how we could reinvent the supply chain to be in all of our interests.”

As part of the discussions, IBM also ended up injecting Watson’s AI nous in to MediaMath’s platform, helping its customers leverage historical data on buying decisions.

“We think this is a great opportunity for all of us to clean out a lot of the things that have accumulated in the supply chain for programmatic media over the course of the last 10 years.

You are watching a segment from a Beet.TV series titled Programmatic Buying: Accountability & Transparency in Focus presented by MediaMath. For more videos from the series, please visit this page.