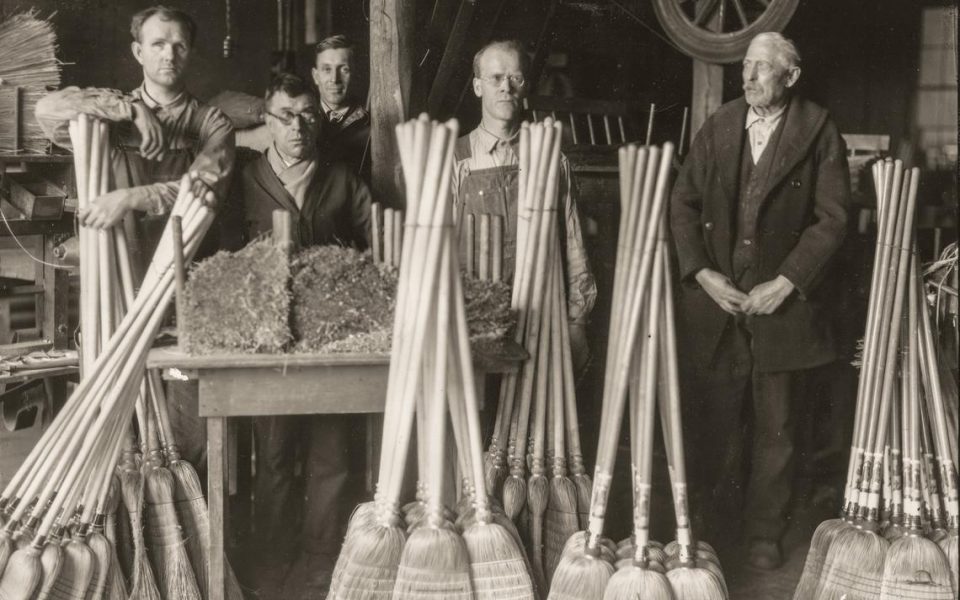 The archival photo, property of the Hibbing Historical Society, shows some of the crew of the Range Broom Factory, which operated in Chisholm from 1920-43. The crew in the undated photo all had certain things in common: They were men, they were former miners, and they were either totally or partially blind.

Eveleth native Tucker Nelson, then a University of Minnesota Duluth student working on his museum studies certificate, came across the story of the factory last year while interning at Duluth’s Lighthouse Center for Vision Loss. He and fellow student Julia Schaefer were putting together displays that would be set up at the Depot marking the Lighthouse Center’s 100th anniversary.

It’s a compelling story, current Executive Director Mary Junnila says. When what originally was known as the Lighthouse for the Blind opened in 1919, it was ahead of its time. Helen Keller had earned her bachelor’s degree from Radcliffe just 15 years earlier. Societies for the blind had formed in Minneapolis and St. Paul five years earlier, but the American Foundation for the Blind wasn’t founded until two years after the Lighthouse.

The founder was Bertha Hanford, blind herself, but with a vision for what people could accomplish in spite of that disability. 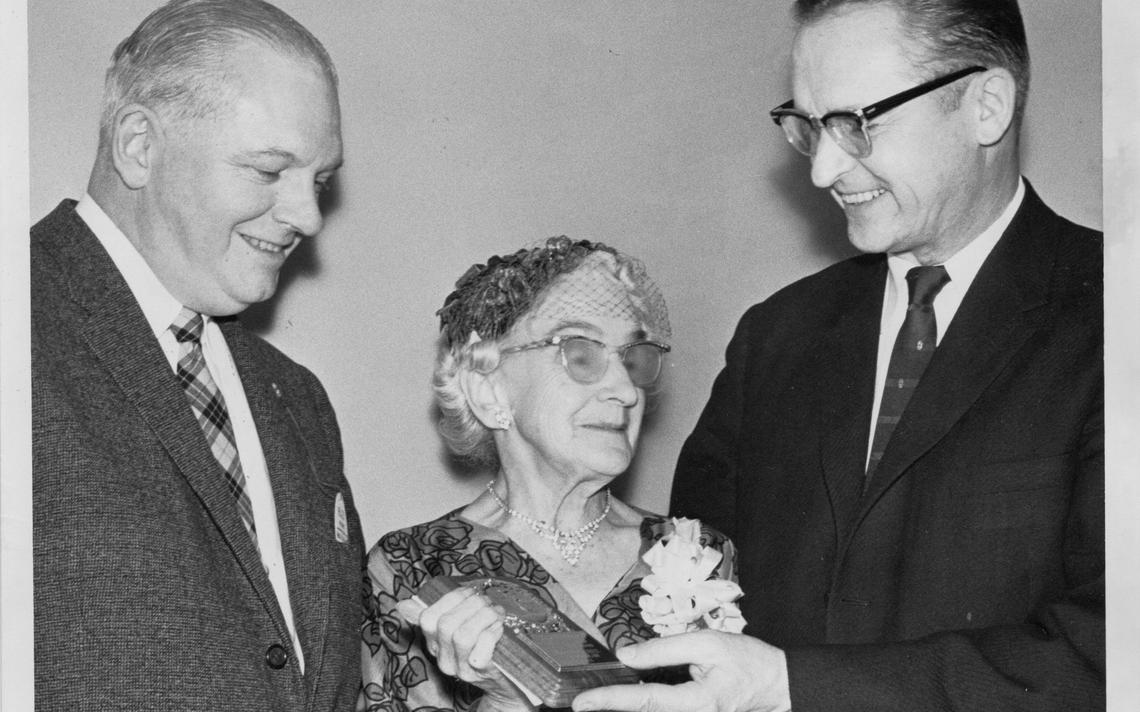 “She wasn’t going to settle for the current norms of the time, which was if you were blind you couldn’t work,” Junnila said. “She was out pounding the pavement, looking for everybody who was blind, to be able to show them that they could earn a living.”

Lighthouse for the Blind originally was established as a workshop where people with vision loss could learn various crafts and market the products that were made. It was never make-work, Junnila said. The Lighthouse was founded with the slogan “Not charity, but a chance,” and its goal was to make quality products that filled needs.

Just a year into that project, Hanford turned her attention to the Iron Range.

“Exactly how she got connected with these mining companies, I don’t know,” Nelson said. “But she wanted to give opportunities to people on the Range as well. And she personally spoke with several of the mining companies and got this going.”

The Range Broom Factory employed men who lost some or all of their sight because of mining accidents and no longer could do that work, Nelson said. It never had a large crew. The most working there at any one time was 10, according to his research.

Why brooms? That’s not entirely clear, Nelson said. Hanford might have gotten the idea from the Upper Peninsula’s Calumet and Hecla Mining Co., which started a broom factory for miners in 1903, he said.

Brooms would have been fairly simple to make, Nelson said, requiring repetitive tasks. “And they were used a lot. I’m sure they were in demand,” he said.

In fact, the mining companies themselves were among customers, he said.

As with the Lighthouse for the Blind, the broom factory was a legitimate business, Nelson said, providing something that people needed and paying its employees a living wage. In fact, their wages averaged 5 cents an hour higher than those of sighted workers, Nelson learned. 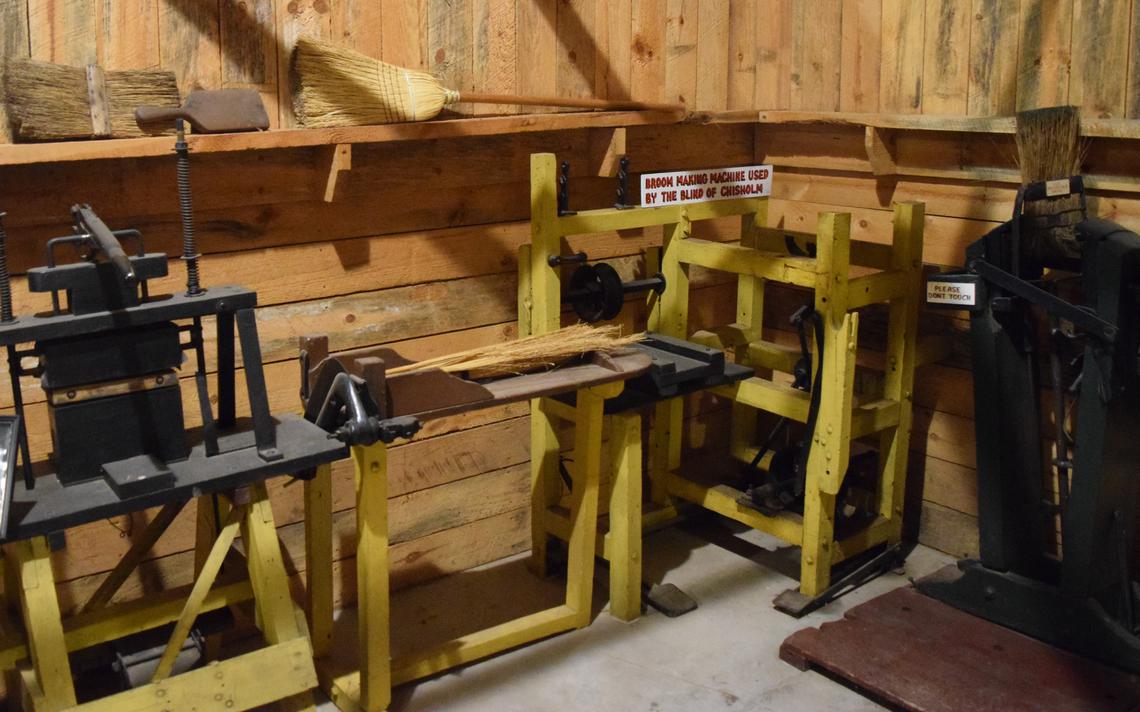 Equipment from the Range Broom Factory is on display at the Minnesota Museum of Mining in Chisholm.

“At the broom factory and at the Lighthouse, they kept trying to let people know that this isn’t a charity,” he said. “Don’t just buy their products because you feel sorry for people. That’s not what they wanted. Buy these products because they’re good products.”

Nelson has been able to tell the factory’s story to a wider audience. He’s now serving as museum director for the Virginia Area Historical Society and as editorial assistant and staff writer for Hometown Focus, a Virginia-based weekly publication. He wrote a piece about the broom factory for its health edition in November.

“For a blind woman to be doing this in the early 1900s seemed impressive in itself,” he said. “But it was giving employment opportunities to people who lost their jobs when they lost their sight. And especially at that time, mining — that was the Range.”

Junnila said she thinks Hanford’s contributions should be better-remembered. In presentations, she refers to Hanford as “Duluth’s Helen Keller.” She keeps a framed copy of a Duluth News Tribune article from June 6, 1948. The article informed the public that St. Louis County had eliminated Hanford’s position as a services to the blind counselor. It also mentioned an encounter Hanford had with Keller, who touched Hanford’s lips to “hear” what she was saying.

“‘All my life I have heard of you,’ the slim lady said to Miss Keller. ‘It is such a pleasure at last to meet you in person.’

“As their hand closed together, in a firm grip, Miss Keller spoke. ‘And I,’ she replied. ‘Have heard also about you.’”

As for the broom factory, it was doing well toward the end of the 1930s, Nelson said, but started to lose its ability to compete during World War II.

“They started trying to diversify, but they just couldn’t compete with larger factories,” he said.

The factory building was torn down at some point, Nelson said. But a reminder of the factory’s 23 years in existence remains. Equipment from the Range Broom Factory is displayed at the Minnesota Museum of Mining in Chisholm.

THE Alliance to ship more from Southeast Asia to West Coast