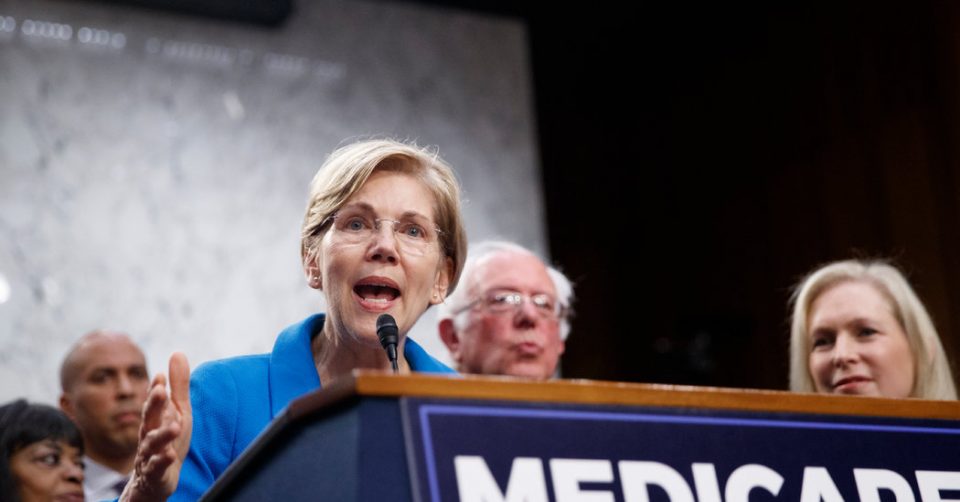 In March 2019, at a CNN forum, she said there were “a lot of different pathways” for universal coverage, and that private insurers “could” still have a role. By June, Ms. Warren was more unequivocal, raising her hand at the first presidential debate to endorse doing away with private insurers entirely.

Still, she allowed herself room to maneuver, especially on how the program would be paid for. She repeatedly refused to rule out raising middle-class taxes, saying only that she would lower overall costs. The tension came to a head in a July post-debate interview, when Chris Matthews, pressed her in a live interview on MSNBC to say what would happen to taxes. Over and over, she refused to answer.

By September, the headlines were everywhere: The candidate with a plan for everything did not have one for the issue at the center of the race. The tax question became so commonplace that Ms. Warren even got advice from the late-night host Stephen Colbert, who recommended she compare it to taxes for public schools.

Behind the scenes, her team was already pressing to get the senator on firmer rhetorical and financial footing. Two long-serving Warren aides, Jon Donenberg and Bharat Ramamurti, were spearheading the effort to develop a financing plan over the summer, with Mr. Donenberg briefing Ms. Warren on various cost options.

But the plan was not quite cooked yet by the time she stepped on the debate stage in Ohio with a bull’s-eye on her back. She had just caught Mr. Biden in national polling averages for the first time, and staked out a lead in Iowa.

The attacks began almost immediately. First came Mr. Buttigieg. Then Senator Amy Klobuchar (“At least Bernie’s being honest here,” she said). Then Mr. Biden (“On the single most important thing facing the American public,” he said, “I think it’s awfully important to be straightforward with them.”)

From a hotel room thousands of miles away, Donald Berwick, a former federal health care official, had watched it unfold with growing frustration. For six weeks, he had been stealthily working with Ms. Warren’s campaign to develop a comprehensive way to pay for Medicare for all.