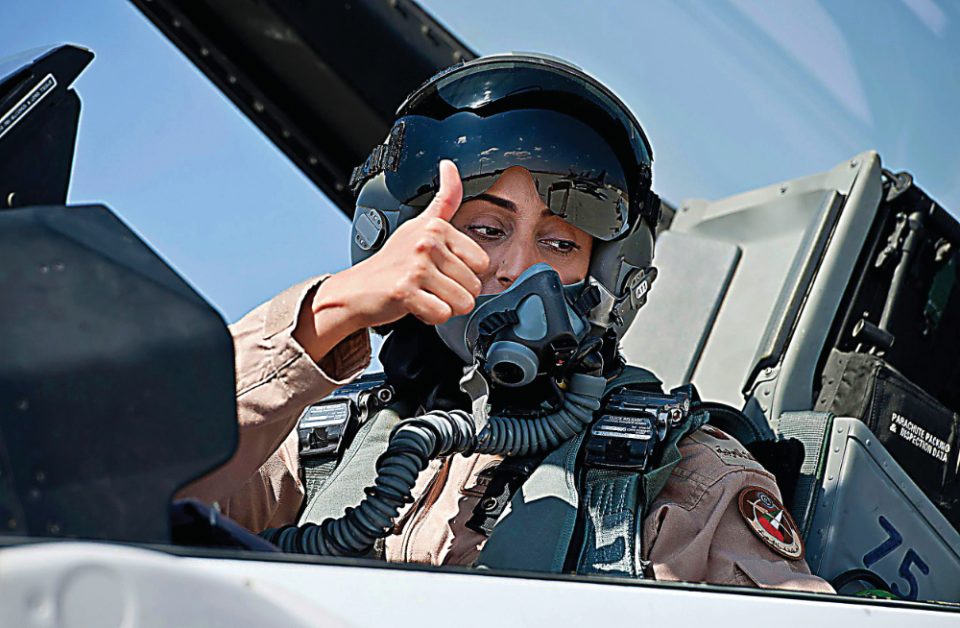 RIYADH: The World Defense Show has traditionally been dominated by men, but more than 25 women are down to speak at next week’s Riyadh WDS conference.

This reflects a change in the GCC, where an increasing number of women are joining the military. This fresh dynamic prevails now in the UAE, Kuwait, Saudi Arabia and Qatar.

The UAE has been the leading GCC country to integrate women into the defense sector.

“It goes back as far as 1991. The Khawla bint Al Azwar Military School was established to train women for service in UAE’s military sector. Every year, a batch of women soldiers graduate and begin their national service duties,” said Myriam Sfeir, director of the Arab Institute for Women at the Lebanese American University, in an interview with Arab News.

While the participation of women in the defense sector has been slow in the region compared to the western world, the trend has showed signs of changing recently, with some of the incredibly talented women taking up national duties for their countries.

One such inspiring story is of Captain Reem Al Buainain, who became the first female officer from the GCC to train in Germany. A programmer for the UAE military, she was chosen in 2018 to attend the NATO school for military personnel.

Looking at another example, Sfeir said that “in 2014 Major Mariam Al Mansouri became the UAE and the Arab world’s first woman to fly a fighter jet (F-16), in an air campaign against Daesh in Syria.”

The headlines these women make in the local media fuels the aspirations of young women who have begun to look at defense as a respected career option.

As part of a UN drive to create a force of female peacekeepers, the UAE Armed Forces decided to train hundreds of women from war-plagued nations in Africa and Asia.

And in 2019, the UAE partnered with the UN Women to launch the Sheikha Fatima bint Mubarak Women, Peace and Security Initiative to train more than 300 women from Arab, African and Asian countries to join the security forces in their countries.

Other countries are also joining the fray.

Last December, the Kuwaiti Army started accepting women’s applications from women who had a university diploma or secondary school degrees.

On the first day of eligibility, 137 Kuwaiti women applied for various military positions according to the US-based Al-Monitor.

“However, (in Kuwait) women are not allowed to hold weapons without the consent/permission of a male guardian. Therefore, their roles will be limited to the service and medical sectors,” said Sfeir.

Female applicants to the defense sector must be between 21 and 40. Women can be recruited as soldiers, lance corporals, corporals, sergeants, and staff sergeants, according to the Saudi news magazine Al-Majala.

“Saudi Arabia also allows the recruitment of women in the military as border guards,” Sfeir said.

This comes on the back of Princess Reema bint Bandar’s appointment in 2019 as the ambassador of Saudi Arabia to the US — a role long dominated by the Kingdom’s defense and diplomatic concerns. She will be a speaker at next week’s WDS.

Saudi women are also taking high positions in defense-related posts. For example, Moudhi Al-Jamea, who is also a speaker at next week’s forum in Riyadh, is the vice president of Saudi Telecom Co. and dean of STC’s technology and leadership academy.

“In 2018, Qatar also allowed the voluntary participation of women in the country’s national service,” Sfeir said.

Women joining the military across the GCC reflects the region’s transformation. The momentum unlocks technological and economic sectors through diversification and encouraging women’s role in society, government and businesses.

This transformation has also faced opposition in certain countries.

“Women’s integration in Arab armies has been slow, inconsistent and socially and politically problematic,” said a joint report by the Carnegie Middle East Center and the Arab Institute for Women entitled: Women in the Arab Armed Forces.

The WDS underlines the transition of women into the world of defense. A number of women with illustrious resumes will be leading and speaking at the WDS military panels.

Events like this on the back of changing trends in the region will provide wings to the aspirations of millions of young women who can become the pride of their nations.

Putting local at the heart of wholesale