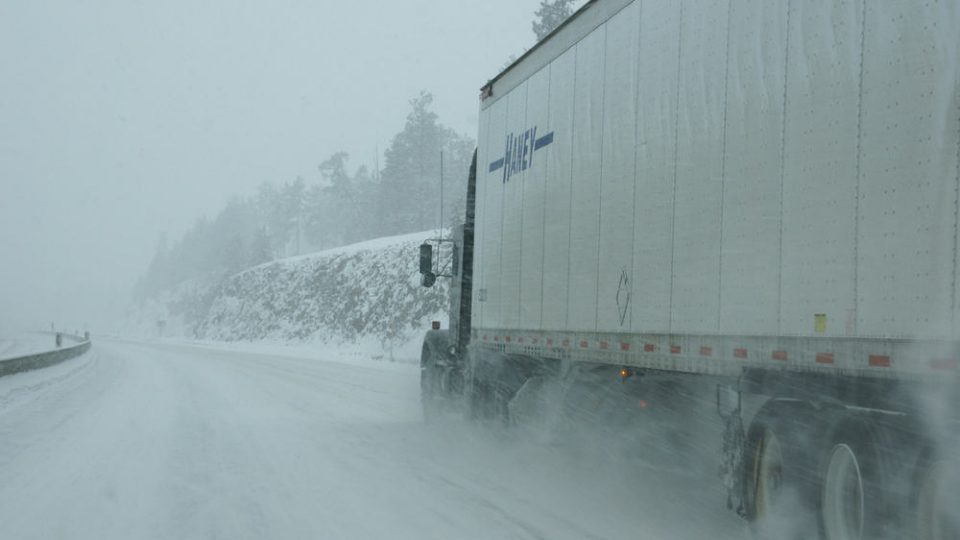 There is plenty of messy weather out there that may slow down supply chains in several regions the next few days. Ice, heavy snowfall and intense downpours of rain will delay drivers from the Mountain West to New England.

First, watch out for snowy and icy conditions the rest of today, Nov. 19, from Maine to the Adirondacks in New York state. Snow accumulations of two to four inches will be common, on top of ice buildup of up to one-tenth of an inch. Some tree limbs and utility lines may buckle under the weight. Isolated/scattered roadblocks and power outages are possible along sections of the I-87, I-89, I-93 and I-95 corridors.

Next, western and northern portions of Montana will get slammed by moderate to heavy snowfall this afternoon and tonight. This is due to a low pressure system pushing through the Pacific Northwest (PNW) toward the High Plains. Six to 10 inches could pile up over many mountain roads such as Logan Pass (Going-to-the-Sun Road), Marias Pass (US-2), McDonald Pass (US-12), and Rogers Pass (SR-200).

A cold front connected to the PNW system will produce plenty of snowfall in the Sierra Nevada Range of eastern California tonight through Thursday, Nov. 21, as well as the Sheep Range, Spring Mountains and Red Rock Canyon in southern Nevada. Total accumulations of 10 to 20 inches are possible in some spots, with wind gusts of 35 mph. Blowing/drifting snow may create white-out conditions and poor visibility. At about the same time, the cold front will dump several inches of snowfall and kick up winds across parts of Wyoming, including Buffalo, Riverton, Casper and Rawlins.

Finally, the remnants of Tropical Storm Raymond will help produce abundant mountain snowfall and valley rainfall across the central and southern Rockies, as well as the Desert Southwest, from later today through Thursday. This was first reported by Freight Waves yesterday, Nov. 18. The forecast hasn’t changed too much; the National Weather Service (NWS) has added several areas to various winter weather alerts initially posted yesterday. These alerts are housed inside the FreightWaves SONAR Critical Events platform in the maps above and below.

Snowfall totals will approach 12 to 24 inches from southern Utah to western Colorado and northern New Mexico. Some Colorado locations such as Telluride, Silerton and Lake City could see as much as 30 inches. Visibility may be reduced at times due to blowing snow. Snow will also spread into Arizona, possibly affecting travel on I-40 through Flagstaff.

Carriers/dispatchers need to make sure that drivers who have to carry loads from milder regions through the Mountain West the next few days follow “protect from freeze” procedures, or put the load in a reefer. Otherwise, their freight that is sensitive to drastic temperature drops may spoil.

While the high elevations get covered with snow, rainfall and embedded thunderstorms will drench the lower slopes and valleys of the southern Rockies and the Desert Southwest. Several periods of downpours could lead to flooding of washes and small streams, as well as localized urban flooding. The NWS has issued a Flash Flood Watch for the Phoenix, Tucson, Yuma and San Diego areas, in addition to portions of southwestern Utah and southeastern California. Drivers may run into roadblocks on the I-8, I-10 and I-17 corridors.

Typhoon Kalmaegi is inching closer to the Philippines. The forward motion of the typhoon has slowed down over the past 24 hours. Now, it looks like Kalmaegi will make landfall in the far northern reaches of the Philippines very soon – by early tomorrow, Nov. 20, local time. Kalmaegi is producing sustained winds of 85 mph. Winds could still be close to this strength at landfall.

On Kalmaegi’s latest forecast track, the typhoon would not affect any major Philippine ports. However, shippers may have to deal with short-term delays in ocean freight as container ship captains in the region slow down to wait out the storm, or steer around it. Depending on the quality of infrastructure, Kalmaegi will create minor/moderate disruptions to local business and supply chain operations in the northern Philippines.

Tropical Storm Sebastien became a named storm this morning. It’s spinning over the western Caribbean Sea, but will not be a threat to any land masses as it moves northward over open waters the next few days.

Fire weather conditions will return to northern California Wednesday, Nov. 20, until early Nov. 21. Because of low-level drought, high winds, and extremely low afternoon relative humidity, wildfires could easily start. Risk areas are from Sacramento to Redding, westward to the portions of the San Francisco area.

Pacific Gas and Electric (NYSE: PCG) may issue public power shutoffs (PSPs) to ensure that power lines blown down by the winds don’t spark any fires. Affected areas are highlighted in purple in the Critical Events map directly above. The NWS is forecasting gusts up to 55 mph, possibly stronger in canyons and exposed ridges. Besides the fire danger, the winds will be rough on drivers and risky if their deadheading.

What do shippers think about Eurasian rail links?