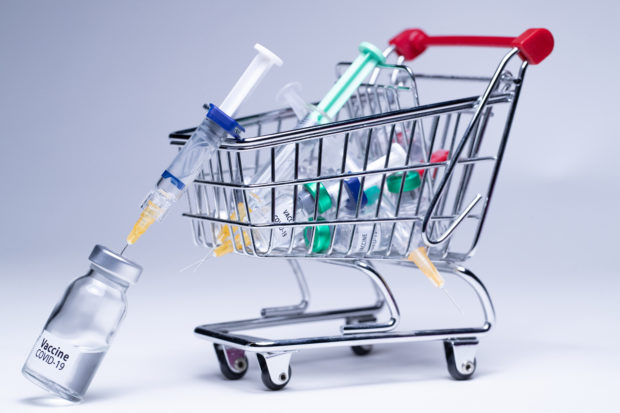 This illustrative photograph taken in a studio shows a minature shopping cart with syringee and bottles reading “Covid-19 Vaccine”, in Paris, on January 8, 2021. (Photo by JOEL SAGET / AFP)

MANILA, Philippines  –  Two groups of healthcare workers are disagreeing over vaccine purchases by local governments, with one saying that allowing it would “aggravate inequity” in the distribution of the shots and the other arguing that local authorities capable of carrying out mass inoculations should be supported.

The Healthcare Professionals Alliance Against Covid-19 (HPAAC) said it strongly opposed a Senate bill that would allow local government units (LGUs) to directly purchase Covid-19 vaccines and exempt them from certain state procurement rules such as the 15 percent cap on advance payments for government purchases.

Antonio Dans, an epidemiologist and internal medicine specialist, said the unequal access to the limited vaccine doses could also drive up prices, and could cause even bigger problems such as “maldistribution of vaccines.”

“The COVID-19 pandemic is not a local problem and vaccines are not a local resource, which means prioritization and distribution requires centralized orchestration,” Dans said.

Dans added that the “patchwork purchasing of vaccines” will likely drive up prices “because the country will lose the scale or volume that one buyer has.”

If LGUs or private companies are allowed to procure vaccines on their own, then the procurement will be “defined by capacity to pay, rather than need for vaccines,” he said.

This, in turn could lead to “maldistribution” of vaccines where priority groups for inoculations may not receive the limited number of shots.

“We will aggravate inequity [if we] distribute geographically according to capacity to pay. When this happens, we all suffer, not just those whom we push to the end of the queue,” Dans said.

The government aims to inoculate at least 70 percent of the Philippine population to achieve herd immunity to stop the spread of the coronavirus.

Two similar House and Senate bills will allow local government to procure their own vaccines, raise a 15 percent cap on advance payments to 50 percent for government purchases and create an indemnity fund to people who may be adversely affected by the shots.

The Doctors for Truth said it supported the measure, saying LGUs should be “given every leeway” to best serve their constituents, including procuring vaccines for them.

“We believe the choice to centralize or decentralize procurement should rest on who can do the job faster and in a more cost effective way,” the Doctors for Truth said in a statement.

Former Health Secretary Esperanza Cabral and Dr. Minguita Padilla, chair of the Eyebank Foundation of the Philippines, are conveners of the group.

“There are really LGUs who can do a better job than the national government. They should be given every leeway to serve their constituents the best way they can, within the correct and relevant parameters,” the group said.

“Coordination, compliance with guidelines, and upmost transparency are key,” the group said.

Senate Majority Leader Juan Miguel Zubiri said the national government would “still be in charge” of the vaccination rollout under his Senate Bill No. 2042 that will allow LGUs to procure their own vaccines and exempt them from procurement regulations.

In an exchange of messages with Senate reporters on Friday, Zubiri said “no one should fear inequitable distribution.”

“Whether through the national government or the LGUs, our frontliners will still be prioritized for vaccination,” he said.

He said local governments were requesting exemption from the requirement of purchasing on from the lowest bidders.

“This is not possible with the COVID-19 vaccine as it is supply-driven. It is impossible because the lowest price is not always available,” he said.

One of the vaccines that would soon land on our shores would come from China and recently obtained a Compassionate Special Permit (CSP) for the exclusive use of members of the Presidential Security Group (PSG) and their spouses or close family members.

Dr. Eric Domingo, director general of the Food and Drug Administration said that in their letter applying for the CSP, the PSG explained that it needed the vaccine made by China’s state-run Sinopharm to protect the President. He said the PSG would be importing 10,000 shots.

The Sinopharm vaccine became controversial after the President disclosed last year that it had been used by soldiers, without specifying the PSG. The PSG later said it had inoculated the president’s personal bodyguards with a donated vaccine, which it did not identify.

That vaccination was considered illegal as no vaccine at the time had been authorized for use in the country. It was investigated by the FDA and the Department of Health (DOH).

Domingo said that after the alleged vaccination in September 2020, the FDA and the DOH wrote to the PSG “to report to me the details—who were vaccinated, what happened, if there were and adverse effects.”

“But as of now, there is no response even after follow ups. We have not gotten a reply,” Domingo said on Friday.

Domingo said the investigation was continuing and “has nothing to do with the CSP, which is for future use.”

For more news about the novel coronavirus click here.


What you need to know about Coronavirus.


The Inquirer Foundation supports our healthcare frontliners and is still accepting cash donations to be deposited at Banco de Oro (BDO) current account #007960018860 or donate through PayMaya using this link .

CHAT gets new, larger warehouse for donation program in Chico