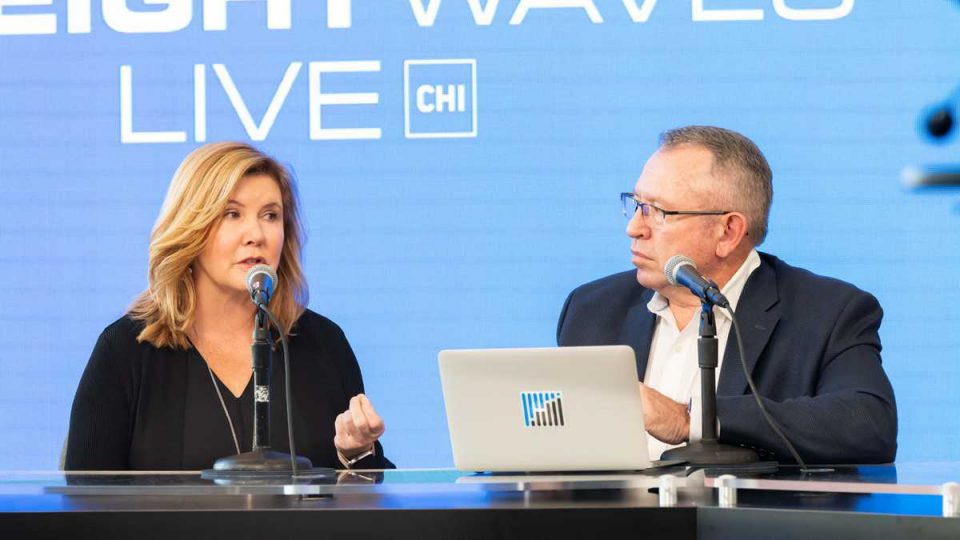 Michelle Halkerston, president and CEO of Chicago-based Hassett Express, likes to describe her company as the “biggest domestic freight forwarder that you never heard of.”

But that’s about to change through increased information technology investments, she told attendees in a live chat with Dean Croke, chief insights officer for FreightWaves, at FreightWaves LIVE Chicago on Nov. 12.

When the company entered the domestic air freight business in 1980, it worked with the publishing industry and the airlines to perform drop shipments of magazines and other print publications throughout the country. Halkerston said this approach is now used for e-commerce shipments.

According to its website, Hassett Express transports more than 100 million pounds of freight a year and is considered a top domestic cargo customer to U.S. airlines United, Delta, Southwest, American and Alaska. In the air freight space, the company provides domestic same-day, next-flight, next-day, time-definite and charter services.

“In air cargo, there’s multiple points, at least three at a minimum. You’ve got a truck on one end, the airline, and a truck on the other end, and if there’s connecting flights there are even more,” she said.

“And we’re regulated. So, there’s a lot of documentation. There’s screening of freight. These are all data touch points that need to be pulled together by a lot of different parties,” she said. “So, collaboration is important and to be able to do that with data.”

She said online cargo bookings and status updates on flights from the airlines have improved over the years. Now the data comes directly into the forwarders’ systems.

Device tracking will be the next phase for air cargo technology innovation, Halkerston said.

“We don’t want to track a conveyance — a truck or an airplane. That only gets us one segment of the shipment,” she said. “What we need to do is track the actual shipment, and now, there’s technology out there that lets you do that down to the pallet level or individual box level, and we’re talking to some of those vendors.”

Halkerston considers technology investments “a cost of doing business.” “We don’t have to give [shippers] a lot of updates while [air cargo] is moving. That’s mainly for us,” she said.

For now, Halkerston views Amazon as both a competitor and customer in the air forwarding segment. As Amazon increases its own cargo aircraft fleet, she believes the company will turn to air forwarders to help fill excess capacity on its planes.

Prior to joining Hassett Express, Halkerston worked in a variety of senior executive positions, including as vice president of product strategy for a transportation software firm, director of eCommerce strategy for Caliber Logistics (now FedEx SupplyChain) and director of logistics for Penske Logistics.

Halkerston also serves as board chair of the Washington-based Airforwarders Association, where she works closely with Executive Director Brandon Fried on a range of regulatory and airport infrastructure issues that impact air cargo.

Halkerston said it is important to stay on top of regulatory compliance and “what’s coming next.”

A major problem for many forwarders operating in the nation’s air freight hubs, such as Chicago O’Hare, New York’s JFK International and Los Angeles International, are delays on the ground due to congestion at terminals.

“It’s great that the flights are on time, but if you can’t get [the cargo] out of the airport you’re late,” she said.

The Airforwarders Association recently held several regional events throughout the country to discuss problems associated with airport infrastructure and future investments. “Cargo needs a seat at the table,” Halkerston said.