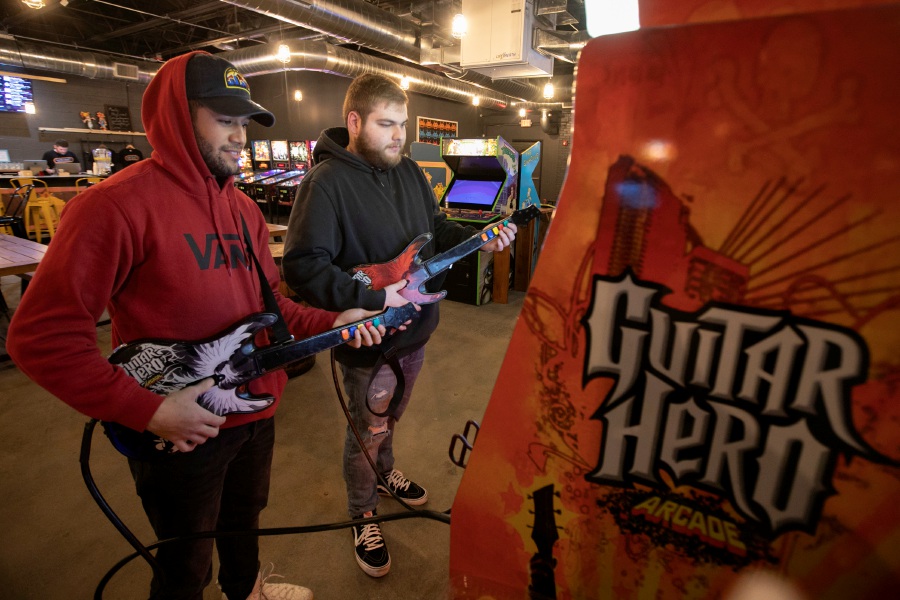 SOUTHINGTON — It takes a few minutes for newcomers at GameCraft Arcade and Bar to take everything in. There’s more than 30 video games from as far back as the 1970s, Nintendo cartridge-shaped tables and video games you can play while sitting at the bar.

Krysten Morillo and his friend Jacob Rodrigues were there for the second night in a row on Wednesday.

“I think this is the most fun I’ve ever had at a bar,” Morillo said.

GameCraft opened a week ago in the Factory Square building downtown at 168 Center St. The business is run by a group of brothers and friends.

The concept was to combine retro video games with craft beers and cocktails, according to general manager Brody Marion.

The bar has 16 taps and 20 more varieties of beer in cans available. They’re from area breweries such as Two Roads, Alvarium, Back East as well as Southington brewers Skygazer and Witchdoctor Brewing.

“Everyone seems to appreciate the draft beer line we have and that it’s all New England-based,” Marion said.

Cocktails are video-game inspired too, said bar manager Tom Butcher, and include one inspired by Pokeman with a Swedish fish in it.

The collection of mostly vintage arcade games is a mixture of garage-sale finds as well as purchases from companies that restore old game cabinets.

“I think this is the most fun I’ve ever had at a bar.”

“Mostly my brother and I have gone around the state fishing them out of people’s basements and fixing them up and getting them floor ready,” Marion said.

At first he’d hoped to have 20 games but had more success than anticipated in finding old titles.

“As soon as we get some of those other games up and running and floor ready, we’ll move things around. We’ll squeeze as many as we can on the floor to keep the variety,” Marion said. “We can hopefully squeeze a few more in with a bit of rearranging.”

Khandis Mir and Dave Miller visited GameCraft for the first time Wednesday night, excited to play Rampage and House of the Dead 2. They’ve enjoyed Barcade in New Haven, which similarly mixes drinks and vintage video games, and were glad to have GameCraft in town.

Beers on tap at GameCraft Arcade and Bar in the Factory Square building in Southington, Wed., Jan. 8, 2020. | Dave Zajac, Record-Journal

Marion wants to start up tournaments and have high scores for various games posted on the walls of the bar. He’s also hoping to add a Nintendo 64, which would complement the Nintendo Switch, Xbox One and Super Nintendo Classic that patrons at the bar can play with wireless controllers.

Marion said people have been impressed with all the games they’ve been able to assemble.

“We got a lot of the old ones that people are looking for,” he said.