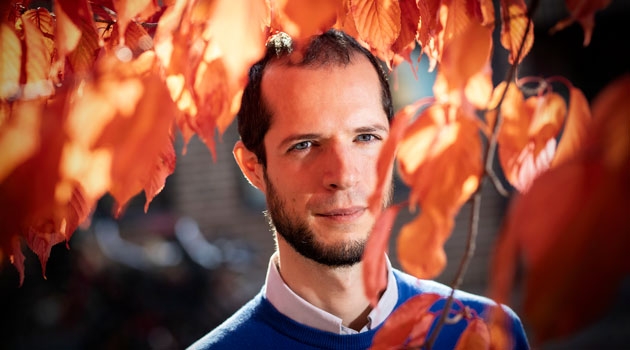 Heavy storms, extreme heatwaves or periods of unrelenting cold. Continued high emissions of greenhouse gases will bring about rapid climate change in which extreme weather events are increasingly common. Gabriele Messori is exploring how far these events can be predicted.

Gabriele Messori, Associate Professor in Meteorology at Uppsala University’s Department of Earth Sciences, has received two large research grants, totalling almost SEK 55 million, within just a few months. The money will go to research on climate change and its effects in the form of extreme weather. What is it about such weather conditions that fascinates us?

“For me, it’s how different weather phenomena affect one another – the large-scale links among weather events. Intensely cold weather in North America often occurs at the same time as strong winds and rain in Europe, for instance, and when a hurricane hits the European Atlantic coast, it generates strong winds and heavy rainfall on land. Everything’s connected. What I focus on is the nature of these connections and whether there’s any way of predicting future extreme weather.”

Messori’s choice to do research in meteorology came about largely by chance. Curious about studying abroad, he applied to various universities, and the first one to respond happened to be Imperial College London. In his life, it turns out, much has been ruled by a combination of chance and curiosity.

“Yes, it was actually by chance that I started researching extreme weather. I was on a four-year master’s programme in theoretical physics. When the time came to choose a dissertation topic, I thought atmospheric physics seemed exciting. That wasn’t really part of my programme, but they made an exception for me. Then, after my master’s, I got a doctoral position in atmospheric physics under my supervisor, and ended up spending a full seven years in the UK, where I was able to immerse myself in that particular research area.”

In atmospheric physics, models are used to investigate and clarify the dynamics of the Earth’s atmosphere and our weather systems. After getting into atmospheric physics, Messori was just a short step away from also becoming intrigued by other aspects of the climate system and thereby Earth sciences as an overall subject area, as well.

“Some people have a misconception that Earth sciences only deal with the earth, volcanoes, rocks and minerals. But the field is so much broader than that: it’s about all the natural systems connected with our Earth. For example, the European Geosciences Union’s work ranges from geology to planetary science and space research. The difference is that we as Earth scientists research the atmosphere closer to Earth, and sometimes other planets in the solar system, and not outer space.”

After completing his doctoral thesis, Messori took up a two-year postdoctoral position at Stockholm University. This was when he embarked in earnest on his extreme-weather research. In 2018, following a research post in the UK and one again at Stockholm University, and a research stay in France, a suitable vacancy arose at Uppsala University’s Department of Earth Sciences. Messori’s application was successful, and after two years at the Department his research has won both appreciation and research funding.

Weather is a topic that for natural reasons naturally interests most of us. It affects our entire existence. We measure the weather, and remember deviant periods. One example is the Fimbul Winter (“the long harsh winter”) in Norse mythology, a three-year long winter without summers, followed by a century-long period of extreme cold. These phenomena were interpreted as mythical but scientists have found traces of extreme climatic deviation following two volcanic eruptions that took place some 1,500 years ago.

“Weather, especially extreme weather, has always fascinated people. It’s also a highly international field of research and we who work in it actively share our findings. Most of us remember the hot summer of 2018, when we experienced extremely high temperatures and heavy downpours. Heat is energy, and with so much energy in the atmosphere, it produces strong vertical air currents that can result in torrential rain.

The phenomenon of extreme heat and subsequent heavy precipitation is more common in Southern Europe, but now we have started to experience it also in Sweden. There are various future scenarios and they’re all related to our greenhouse gas emissions. One future scenario is that we in the Nordic countries are in danger of getting a completely different climate, with extreme summer heatwaves and heavy downpours, similar to Southern Europe.”

Uppsala has one of the world’s longest series of weather records. Here, we have been measuring the weather for almost 300 years, since the days of Celsius. Initially, the readings were handwritten local research data; moreover, various types of thermometers were used. On the other hand, historical, global weather measurements and large-scale comparisons dating further back in time are lacking, and this makes defining “extreme weather” difficult.

“If extreme weather events were prevalent we wouldn´t call them extreme, but actually defining what is extreme is very difficult. If we make comparisons on a global scale, we base our research on satellite data, which began to be collected in the late 1970s. So if, like me, you want to research large-scale patterns, the available data go back only 40 years or so. There’s a lot of debate about whether to use the data that go back further than the 1970s. It can be done, but then the calculations would be more uncertain. There’s still a lot of research left to be done.”

The purpose of Messori’s research is to enable the results to be put to practical use. He is currently collaborating with insurance and disaster-modelling companies on a project aimed at developing better insurance products, such as agricultural cover.

“Looking back on 2018, approximately 50 percent of the harvest in Sweden was lost when the heatwave struck. In another country, one relying on domestic food production, such a situation would be catastrophic. Every year, countless farmers around the world are at risk of losing their harvests because of extremes such as cold weather or drought. Their survival stands and falls with the weather. Improving insurance cover for frost, hail and drought could be revolutionary.”

Driven by curiosity and with a specific goal in sight, Messori feels that he has found his niche.

“This is no ordinary 40-hours-a-week job. As a researcher, curiosity gives me the strongest impetus to continue finding solutions to a range of problems. If I have a research question to answer, it’s there in the back of my mind the whole time, around the clock. At the same time, I have the privilege and freedom to be able to devote a large part of my working time to doing what I like and researching what captures my interest.”

Former chairman of D. Hauser Inc., Stewart B. Hauser Has Passed Away at the Age of 78

U of A Offers New Finance Graduate Degree in Fall 2020