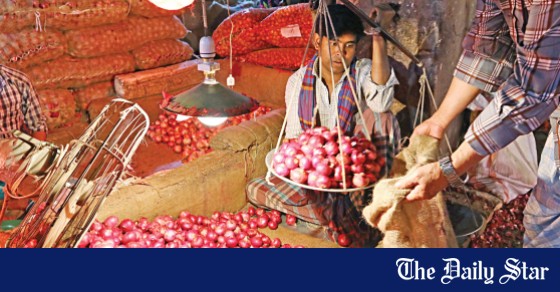 Over the first nine days of the current month, importers brought more than 2,500 tonnes of onion from four countries — Myanmar, China, Pakistan and Turkey.

And except for Myanmar, the average import cost for the popular vegetable was Tk 27 per kilogram (kg). In the case of Myanmar, the import price was Tk 48 per kg.

There was a similarity in the nearly 210,000 tonnes of onion that were imported in between July and September of the current fiscal year — average price of each kg was Tk 27.

However, those bulbs retailed at almost double the import price at a time when there was no export ban in India, the main source of onions for Bangladesh.

The scenario changed after India implemented a ban on outgoing onion shipments on September 14.

Soon after, the price of onion shot up at local markets with traders citing a shortage of supply.

The imported bulbs were sold at three to four times its import value as the frequency of forward sales or contracts among importers and traders increased owing to the prospect of higher profitability amid a supply deficit.

Importers and wholesalers said the price of onion goes up before it even reaches the wholesale markets as shipments change hands twice or thrice through an informal or paperless trade, termed as forward sale.

Md Asaduzzaman, proprietor of Welkin, a clearing and forwarding agent at Benapole land port, said the practice of forward sales for perishable commodities has been ongoing for several years.

This is a kind of advance sales under which import consignments are sold ahead of the arrival of the goods, he said.

“The extent of forward sales goes up when there is shortage in the market as middle men enter the supply chain. In case of onions, we see that retail prices are going up to Tk 100 per kg,” he added.

An importer at Sonamasjid land port in the northern district of Chapainawabganj said consignments of onion change hands several times after arriving at the port.

“Prices also go up because of wastage,” he added.

As a result, there is a big difference between the wholesale, retail and import prices, said market insiders.

Yesterday, the retail price of imported onions was Tk 90 per kg in Dhaka, up 78 per cent from about Tk 50 per kilogramme a month ago, as per data from the Trading Corporation of Bangladesh (TCB).

“Due to the export ban in India and the onion crisis in the local market, it is changing hands two or three times before being released from the port,” said Mintu Sawdagar, an onion wholesaler at Khatunganj, Chattogram.

He went on to say that Khatunganj’s wholesalers sell onions at prices fixed by importers and get 2 to 3 per cent as commission from a sale.

So, they have no influence over the price hikes or drops for onion in the market, Sawdagar added.

Seeking anonymity, an onion wholesaler at Shyambazar, a wholesale market in Dhaka, said he bought onions imported from Pakistan at Tk 110 per kg at a time when the prices had been moving upward following India’s ban on the kitchen staple last year.

“Prices eventually fell and I had to sell onions at about Tk 60 per kg. I urged numerous importers to readjust their prices but they refused,” he added.

Omar Faruque, executive magistrate of the Chattogram district administration, said they found that wholesalers could not show receipts for their purchases from importers as trade deals are mainly done verbally through phone calls.

“The wholesalers claim that they sell products at a price fixed by the importer and receive only commission but the importers deny this.

“Both parties claim that they sell products through phone calls, so there is no sales receipt. For a long time, importers and wholesalers have been doing informal transactions without documents to control the market by themselves,” he added.

Faruque also said they made some recommendations to the commerce ministry to address the issue, highlighting the problems caused by undocumented transactions.

“We recommended for fixing the retail and wholesale price of onions. We also proposed that keeping receipts to be made compulsory for any transaction,” he said.

It is possible to determine the price of any product by calculating its import cost, depreciation, transportation and profit.

But it will not be possible to contain the price of onion if maintaining receipts on every transaction is not made mandatory, he added.

Health care: Trump’s war on Obamacare is coming back to bite him

BJ’s Wholesale Club opens Friday in Chesterfield, what to know