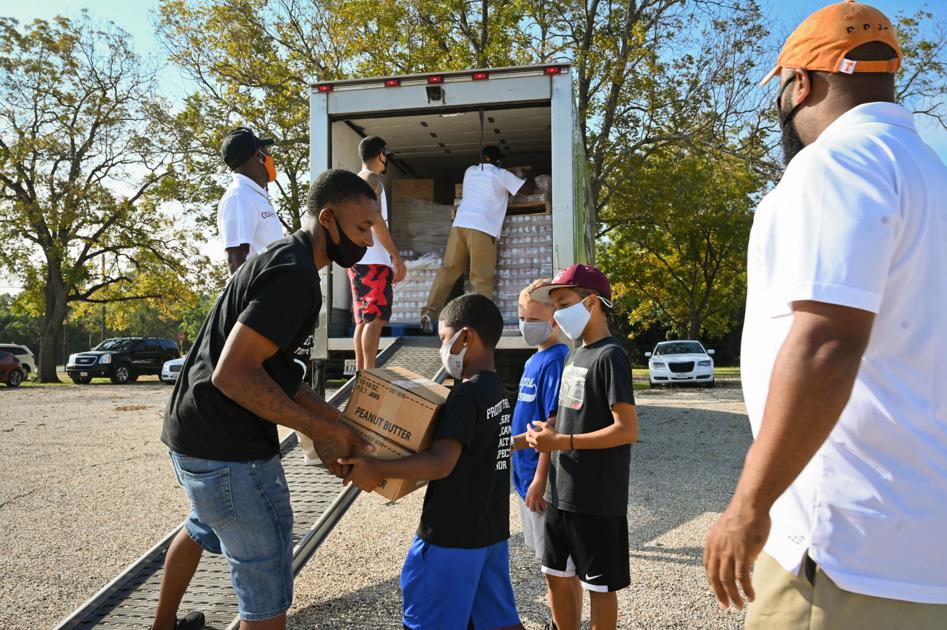 The Ramonce Taylor Youth Association of Temple teamed up with Houston-based Farm to Neighborhoods on Saturday to give away boxes of fruits and vegetables at the MLK Festival Grounds.

Volunteers set up tables and stacked goods behind two Brothers Produce refrigerator trucks in the well-organized drive-through giveaway. A lead person called out how many families were represented by each vehicle.

Early on, Selvin Young, owner of FTN, said they were averaging about two families per vehicle, and he estimated that up to 500 families would receive food.

“So far, this has been an amazing experience,” he said. “We’re able to talk to people and put smiles on their faces. The whole point is to get the community together, to give to one another. Also this is to provide fresh fruits and vegetables to the community the way our grandparents used to do.”

Ramonce Taylor said he felt good about the turnout.

“I look forward to doing more events like this and helping out and bringing the community together,” he said. “Selvin is my big brother.”

They both used to be running backs for the University of Texas.

“Running backs stick together,” said Taylor, a former star athlete at Belton High School. “Fifteen years ago we were whipping OU’s behind. Today we’re helping the community, and the brotherhood is still strong.”

They don’t have another giveaway in Temple scheduled, Taylor said, but he hopes to have one around Thanksgiving, a time when families are really in need.

In addition to the expected boxes of fruits and vegetables at this distribution, there were also hams, other meats, ribs, fajitas and tortillas, he said.

“They surprised us,” he said. “I’m just proud we were able to bless the community.”

As to future food distributions in Temple, Young said they would be able to gauge the need by the day’s turnout.

Farm to Neighborhoods is a for-profit organization, he said, that uses a website to sell fresh fruits and vegetables. People go to the site and when they’re buying they donate boxes of food for these giveaway projects, he said.

“So as we go to different communities, that community can support their own,” he said.

“We’ve done this 15 times in Texas and two times in Louisiana,” he said.

He’s dividing the food distribution program into three phases, he said. The first phase is providing fruits and vegetables to senior citizens who are in assisted living, he said.

The second phase is working with the church, he said. He wants the church to get the community involved in the food distribution project, he said.

The third phase involves the youth, he said, working with different youth associations to get them to lead in the distribution.

“We have young people today actually doing the work,” he said.

Waiting in the line of cars, Shakema Tuck of Temple was accompanied by her daughter, Lyllianna, 7. Tuck said she has four children.

“We can use any of it,” she said of the dispensation. “After paying bills and getting caught up on loans, we didn’t have money for food. Every little bit helps. I appreciate all the food pantries around here and all the donations.”

Made in Fiji: why it makes sense | NZBusiness Magazine