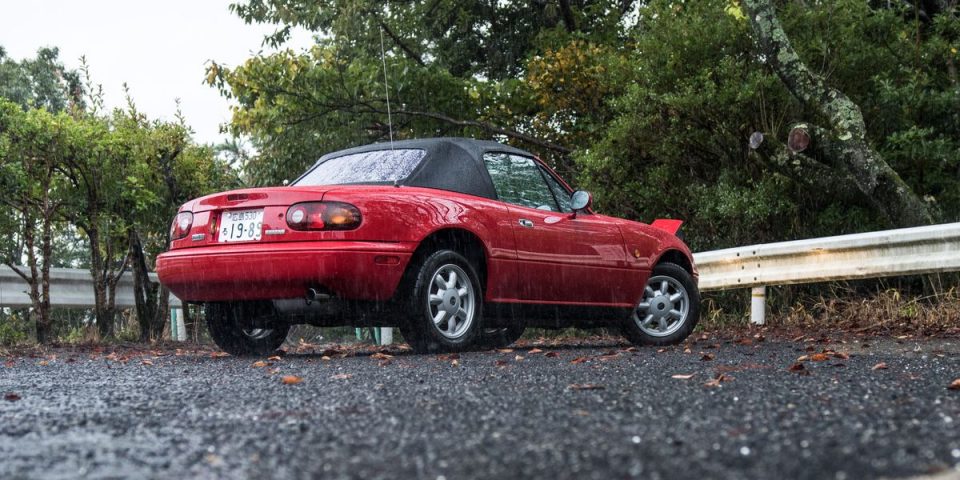 Hiroshima, Japan – Rain hisses down, pattering off leaves, bouncing off the pavement, drumming on the roof of a little red convertible. The last scraps of typhoon are spiraling off into the Pacific Ocean, and there is sun in the forecast. Today, though, is wet and ordinary, made special only by a car that is doing its best to disappear.

This is one of two factory restored Eunos Roadsters, better known on this side of the ocean as the Mazda Miata. This basic car and a better equipped British Racing Green model were the frontrunners of Mazda’s in-house renovation program, currently only available to Japanese owners. It is essentially a flawless reproduction of what the original was in 1989.

In the thirty years since this little car was first produced, much has changed. Modern cars protect us better. They ease our way. Increasingly, they isolate and distract us. Driving has never before been more effortless and comfortable, traffic woes notwithstanding.

The Miata is not like that. Even with the roof up, it’s not a warm cocoon separated from the world, but a machine that lets you experience it. It’s a tent, it’s a bicycle, it’s Totoro with his umbrella. Driving this little Mazda around Hiroshima lets you see the city as if the car didn’t exist at all—which is exactly what the Miata’s engineers intended.

Hirsohima is famous for three things: a bomb, a gate, a company. The first has echoes in the city’s central park and peace museum. The second is a floating shrine that attracts thousands of tourists, especially with the coming Olympics. The last is Mazda, a company that continues to do things very differently than its Tokyo-based contemporaries.

Tokyo is the largest metropolis in the world, crowded and sprawling. Hiroshima is not. It’s basically Portland with kei cars. Built around a harbor on the placid Seto inland sea, the city butts up against forested mountains, and feels much smaller than its 1.1 million population would suggest.

I drive the Roadster past the ruined dome that was ground zero for the atomic bomb, over the t-shaped bridge that the crew of the Enola Gay used as their target, out past flocks of uniformed schoolchildren, and up into the hills. The little 1.6-liter four-cylinder hums happily away, the transmission snicking into gear in my left hand, the Momo steering wheel chattering away with feedback.

There are certainly more involving cars than an original Miata. I once drove a Hayabusa-powered Caterham that had all the constant feedback you could possibly want. It was not so much placing your palm on the road, as it was licking the tarmac.

In contrast, this restored Mazda is a bit like Ned Flanders’ ski suit. It feels like you’re driving nothing at all. Stupid sexy Flanders—but the point stands: after an hour or two behind the wheel, I’ve forgotten I’m driving a car that has been painstakingly restored by Mazda’s best technicians, several of whom were pit crew on the 787Bs that won the 24 Hours of Le Mans.

Jump on Google Maps and zoom in on any of the areas on the outskirts of Hiroshima. The highways are straight, boring right through the hillsides in long tunnels. The side roads are jagged skitterings on the map, like an EKG gone bad. Just like the parts of L.A. that are next to the start of the Angeles Crest highway, Hiroshima is right on the doorstep of a countryside veined with great driving roads.

Get the restored Roadster out on some of these roads, and it makes absolute sense that it was Mazda that brought back the idea of a lightweight, modestly-powered sports car. Unlike Tokyo, which requires a toll-heavy commute just to get to places like the Hakone skyline drive, Hiroshima’s countryside is only a short hop away. The Miata could only have been made here.

Nature is part of it, the second half is Hiroshima’s engineering culture. This far from the financial centers of Tokyo, companies still make decisions that don’t make sense from an accounting perspective. Putting together a top-level restoration program for a near-disposable economical roadster borders on nostalgic folly. Allocating the R&D budget to building the thing in the first place was outstandingly risky.

As it turned out, the Miata was a huge success, thanks to the work of unsung heroes like Tetsu Kasahara, responsible for the chassis of the original NA cars. He still owns a first-generation car, and was only a few years into his career when he was entrusted with the job of sorting out a car that would pick up the banner dropped by the fading British sports-car industry.

“The suspension setting was almost an accident,” Kasahara says, speaking through an interpreter. “It had to perform on all three Miata types—either with the folding roof up or down, and also with the added weight of a fixed hardtop.”

Mazda used cars like the Alfa Romeo Spider as a benchmark, but Kasahara says that the original Miata wasn’t designed to emulate any specific car. Rather, the small team of young engineers worked together to try to hone something unique. Physically, the car looks a bit like a Lotus Elan and has an exhaust note that echoes an MGB, but the Miata’s dynamics weren’t intended to emulate something that already existed.

Kasahara and his coworkers spent hundreds of hours running the Miata around the Miyoshi proving grounds, only achieving breakthrough when the car seemed to evaporate into the ether. That playful, puppy-like roll and dive was more a part of experiencing the road than a mechanical reaction to it.

Mazda’s restoration efforts included carefully recreating the original Bridgestone tires, which Kasahara was involved in. Modern compounds and manufacturing processes created initial problems, but when they got it right, “I thought, this is the same feeling that I wanted to have.”

Kasahara shows me some photos of the Miata shakedown trials in Europe. They have the car’s suspension pulled apart at the foot of the alps, changing some setting or other, with an RX-7 chase car nearby. His face changes at the memory, transforming into boyish excitement.

Imagine that experience, being in your twenties, halfway around the world, creating something that would change driving for thousands of people. Picture yourself traversing some of the greatest roads in the world, part of a close-knit team, wrenching away in the shadow of the mountains, then coming home to fine-tune your design on the backroads you grew up on.

In such circumstances, you couldn’t help but create something like the first Miata. It doesn’t have the character of a European roadster, nor the razor-edged engineering heritage of a S2000, neither the punch nor pace of the turbocharged heavyweights of its time.

Instead, the Miata was born in a place where driving is still a joy, created by people who were in the midst of youthful adventure. It was made to be the frame for the photographs you take, the ambient background music you don’t notice, a plate for a meal.

Driving a Miata around Hiroshima lets you experience and understand the city in a way few other cars can. But that’s what we’ve always loved about this little car. It’s always been made to fade away beneath your fingers and feet. You aren’t meant to remember the car. Only the drive.

Distribution Executives Spot Trends for 2020 and Beyond