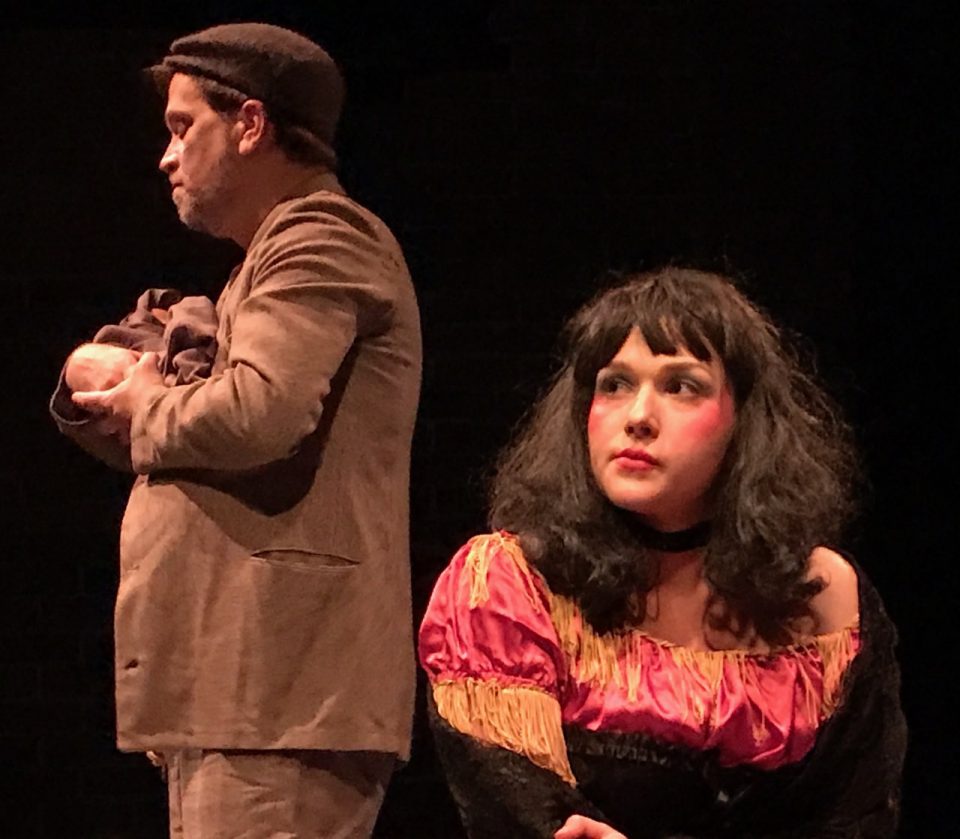 THUMBNAIL SKETCH:  Some background: It’s 1888 in the poverty stricken East End of London where enclaves such as “Whitechapel” and “Mile End” are associated with the grisly murders committed by a serial killer, never apprehended, known as “Jack the Ripper.” Crushing poverty has driven many women to prostitution and the brutal disembowelments of Ripper’s prostitute victims have created a panic in these poorer neighborhoods. This is where immigrants were able to afford housing, most being either Eastern European Jews or Irish. In fact, there is a large Jewish population of varying income levels. As the play opens, there is great concern among the prostitutes for their lives at the hands of The Ripper and concern among the Jews for their lives knowing how quickly they could become scapegoats for the panicked populace.

Playwright McCrea has obviously done his homework and presents historical situations populated by fully formed characters where none of the roles are only one dimensional.

Playwright McCrea has obviously done his homework and presents historical situations populated by fully formed characters where none of the roles are only one dimensional. This was very true, I thought, of the women’s roles. Far too often mothers, wives, or prostitutes become simplified “types” instead of complicated flesh and blood people. But not here. I was impressed.

For the men, central to the action are two fascinating, multi-faceted characters. Joseph Lawende, a well-off Jew, while not as panicked as his Polish wife whose family was murdered in pogroms back home, is concerned enough about how anti-Semitism may affect his community to the point of sponsoring vigilantes to patrol the streets at night.

Another nuanced character is Jack Donovan, an Irish immigrant, whose common-law wife is a prostitute, and who preaches that only economic reform will stop the killings, even if he ultimately succumbs to the mass hysteria. The current political-social-economic-cultural scene is simply a factory for murderers. In the end, Donovan proclaims: “There is no comfort for us lost souls.”

THE PLAYERS, THE PLAY, AND THE PRODUCTION: New plays. It’s what they do at the Alleyway and they’re serious about it.

Exhibit A: Every year they produce “Buffalo Quickies” and this year the 29th Annual Celebration of One-Act Plays will run from March 26 through April 18, 2020.

Exhibit B: The Alleyway is also offering an evening course/workshop in playwrighting for beginning writers ages 16+. PLAYWRITING 101 will be held for 8 sessions on Wednesday Nights from 6:00 p.m. to 8:00. From February 5 through March 25, the Alleyway promises that “instructors Bella Poynton and Jon Elston will help you figure out what your story is and how to tell it effectively for the stage … No experience necessary. For anyone ages 16+.” (Visit www.alleyway.com and click on the “Theatre School of WNY” tab.)

Exhibit C: Every year the Alleyway holds the Maxim Mazumdar New Play Competition. In 2018, Alleyway Executive Director Neil Radice told me, from about 80 entries, FACTORY FOR MURDERERS won, because (and I’m quoting him from memory) “most playwrights who deal in historical subjects do a lot of research, but so much so that their works are stuck back in the period. Scott McCrea’s play was intriguing because it showed how the issues affecting Victorian England are still current in today’s society.”

Indeed. Indeed. Going to Wikipedia revealed that London’s East End has always been a landing zone for immigration most recently a large population from Bangladesh, who suffered the same prejudices and poverty that the Jews and Irish had experienced decades earlier, including reprisals from the locals, the most famous being the skin-head murder of a 25-year-old factory worker named Altab Ali.

And of course, America’s “fear of the other” drives contemporary issues of racism, Islamophobia, and fear of immigrants to make this play very current and very relevant, not to mention issues of income inequality. 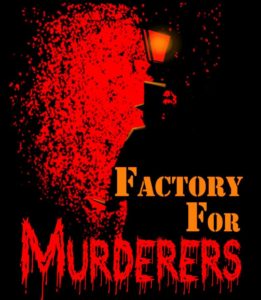 Some production notes: The clever set by Todd Warfield has reconfigured the traditional Alleyway proscenium stage into a multi-level “theater-in-the-round” so audiences have a wide choice of where to sit (it’s always open seating at The Alleyway). I sat in the area which traditionally would be “on-stage” on the advice of fellow-attendee Melissa Levinthal who pointed out that several scenes would otherwise be “behind” us. I would also recommend sitting on either “side” of the stage, for good sightlines.

The costumes and properties by Todd Warfield and Joyce Stilson seemed very appropriate for the times and characters, and given that 3 of the actors play 9 of the characters, costuming, wigs, and props are critical to the audience following the story.

Well, costuming, wigs, and props along with good acting! So at this point I would like to shower some praise on all the actors, in the order listed in the program. Last season we drove up to Niagara University for a performance of COPENHAGEN, a story about physicists Niels Bohr  and Werner Heisenberg, who was played by a senior named Nolan Miles. We went because it was directed by the brilliant Katie Mallinson and came away very impressed by all three actors. And here one of them was back on stage, now a 22 year old graduate taking on 5 roles, getting laughs as a street vendor selling “Jack The Ripper Fudge” and later adding just the right air of mystery as an enigmatic figure named Ezra. Remember that name, Nolan Miles.

Bob Bozek has been (to me at least) keeping a low local profile out in Lancaster, Chicago, Toronto, and in films. Here he creates a different kind of detective (Inspector Watkins) with an unplaceable accent and a somewhat dubious look on the world, not dissimilar to Daniel Craig’s investigator Benoit Blanc in the current movie “Knives Out.”

Emily Lotocki plays Alice, a prostitute, whom we first encounter planning to sell her four-week-old infant daughter. Thin, frail, always cold, she counters the “moral” challenges of the other prostitutes with the hard truth of what Victorian historian Thomas Carlyle dubbed “the dismal science” (Economics).

Alice’s friend, the comparatively sanguine Molly, is played with a huge range of attitudes and emotions by Sandra Roberts, most recently so impressive as the politically savvy Maddy in NAVIGATORS as well as so brave as Amanda in GIRLS WHO WALKED ON GLASS, making this her third new play in a row at the Alleyway. Again, a name that should be reason enough to visit any theater where she is on stage.

Emily Yancey, also an Alleyway regular (Artie nominated for KILLER RACK) who was also one of the fearless younger actresses in GIRLS WHO WALKED ON GLASS and recently starred in SHE KILLS MONSTERS, is often cast in roles of women in extreme circumstances and, as expected, excels in her role of prostitute Kate. She also convincingly doubles as an old Jewish mother.

James Cichocki, who just came off a spectacular run in the one-man BRIGHT COLORS AND BOLD PATTERNS is also an Alleyway regular where, along with Ms. Yancey, he appears annually in A CHRISTMAS CAROL, playing Scrooge’s nephew Fred. It seemed to me that Cichocki has modeled his current character, Jack Donovan, after Fred, in wearing life like a loose garment. Some scenes with Jack, though, call for some sudden outbursts. As much as I admire Cichocki, I might have cast an actor who can create a more menacing edge, more of a veiled threat.

Trevor Dugan, also a GIRLS WHO WALKED ON GLASS alum, here takes on a role as a quintessential Brit, all Queen and Country, stiff-upper-lip, and was delightful as Joseph Lawende, who, with his moustache reminded me of my favorite portrayals of Dr. Watson by Nigel Bruce, opposite Basil Rathbone as Sherlock Holmes (typical video here).

Madeline E. Allard, who has appeared on various stages including Paul Robeson Theatre, and is actually a dancer and choreographer, puts all that on hold and becomes the very tightly wrapped Hadassah Lawende, who escaped anti-Semitic terrorism in Europe, and is the complete opposite of her English born husband, Joseph. She is confined to move in limited space, and so is very expressive with her face and voice.

And, finally, the unsung heroine award goes to Amy Rochford in her theatrical debut as the “Roaming Prostitute” whose principle jobs were to walk the stage before the acts, and then, at the appropriate times, scream and die. Actually, she had a pretty damn good scream.

On the topic of the on-stage but dimly lit murders, one slight complaint several of us had was with the music (?) played during the assaults ending with a highly synthesized voice proclaiming “Jack The Ripper.” The second time that happened it induced giggles around me. If this had been a campy production, fine. But it’s a serious, thought provoking play, and that music was, well…. something else. One bright note: In an attempt to locate that soundtrack, I Googled “rock, music, Jack The Ripper” which resulted in some fine videos by Motörhead, Link Wray, Judas Priest, and many others. I never found what we heard in the theater. But I had fun trying.

*HERD OF BUFFALO (Notes on the Rating System)

ONE BUFFALO: This means trouble. A dreadful play, a highly flawed production, or both. Unless there is some really compelling reason for you to attend (i.e. you are the parent of someone who is in it), give this show a wide berth.

TWO BUFFALOS: Passable, but no great shakes. Either the production is pretty far off base, or the play itself is problematic. Unless you are the sort of person who’s happy just going to the theater, you might look around for something else.

THREE BUFFALOS: I still have my issues, but this is a pretty darn good night at the theater. If you don’t go in with huge expectations, you will probably be pleased.

FOUR BUFFALOS: Both the production and the play are of high caliber. If the genre/content are up your alley, I would make a real effort to attend.

FIVE BUFFALOS: Truly superb–a rare rating. Comedies that leave you weak with laughter, dramas that really touch the heart. Provided that this is the kind of show you like, you’d be a fool to miss it!

Here’s Why You Should Retain Cheesecake Factory (CAKE) Stock