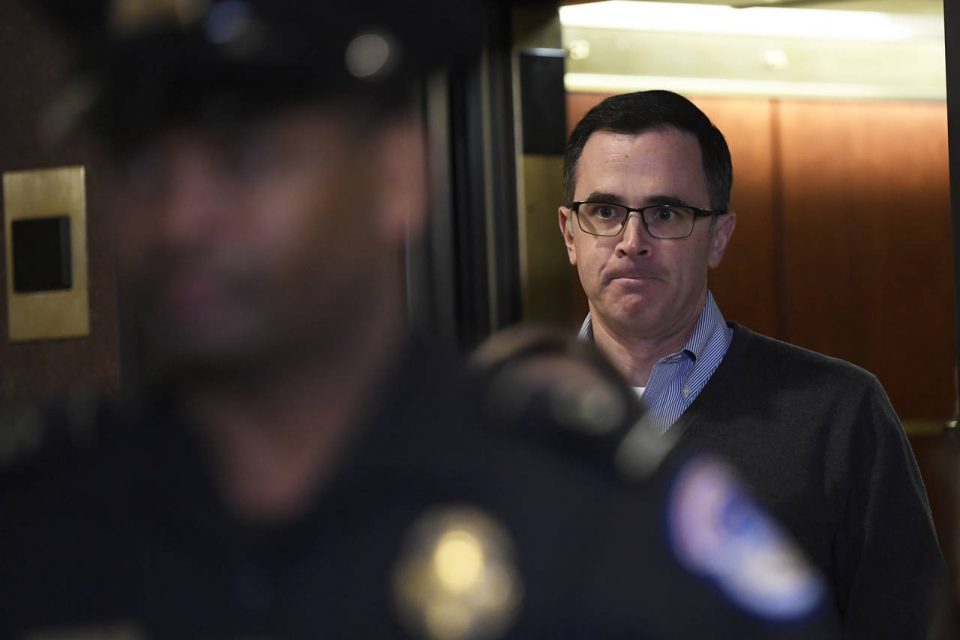 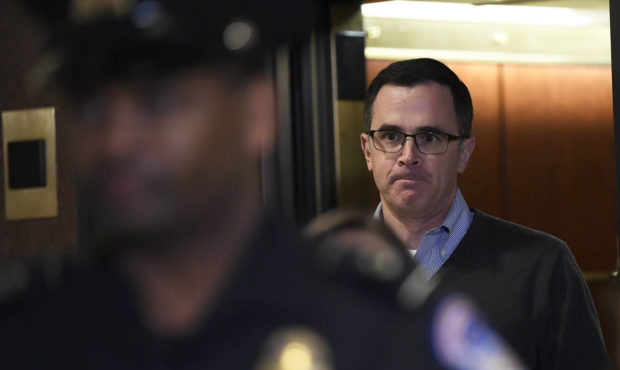 Tim Morrison, the top Russia official on President Trump’s National Security Council, gets off of an elevator as he returns to Capitol Hill in Washington, Wednesday, Nov. 6, 2019, to review his testimony before the House impeachment inquiry last week. (AP Photo/Susan Walsh)

A former national security aide to President Donald Trump has given lawmakers a new account of how military aid to Ukraine came to be released.

In a transcript released Saturday, Tim Morrison describes a Sept. 11 meeting at which Vice President Mike Pence and Ohio Sen. Rob Portman pressed Trump to free up the money.

Morrison said Pence and Portman “convinced the president that the aid should be disbursed immediately,” and that it was “the appropriate and prudent thing to do.”

Morrison was briefed about the meeting but did not attend.

The Oval Office meeting came only a few days after Democrats opened an investigation into Trump’s handling of Ukraine.

The House’s impeachment inquiry centers on Trump’s push for Ukraine to investigate Joe Biden and his son.

The official, Tim Morrison, says he and a top White House lawyer, John Eisenberg, agreed that access to the controversial call should be restricted.

But Morrison says Eisenberg later told him that he did not intend for the call summary to be placed on a highly classified server. He says Eisenberg’s staff apparently put it there by mistake.

Morrison said nothing on the call warranted placement on the server.

Trump on the call pushed for Ukraine’s new president to investigate Democratic rival Joe Biden and his son. The conversation is central to the House impeachment inquiry.

An aide to Vice President Mike Pence has told House impeachment investigators that President Donald Trump’s push for Ukraine to open investigations was “unusual and inappropriate.”

Jennifer Williams is among the staffers who took notes during Trump’s July 25 call with Ukrainian President Volodymyr Zelenskiy. She testified to investigators earlier this month, and a transcript of her testimony was released Saturday.

Trump on the call with Zelenskiy pushed for Ukraine’s new president to investigate Democratic rival Joe Biden and his son. At the time, the White House was withholding military aid to the country.

Williams testified that Trump’s discussion of a specific investigation with Zelenskiy seemed “unusual” to her because it was “more political in nature.”

She said the requests seemed tied to Trump’s “personal political agenda” as opposed to “a broader foreign policy objective of the United States.”

Morrison recalls conversations with Trump’s European Union ambassador, Gordon Sondland. Morrison said he was “uncomfortable” with what Sondland was telling him, that Trump wanted Ukrainian President Volodymyr Zelenskiy to announce investigations that would help him politically.

Sondland told Morrison after one of his conversations with Trump that there was “was no quid pro quo, but President Zelenskiy must announce the opening of the investigations and he should want to do it.”

Morrison reported at least two of his conversations to National Security Council lawyers.

More transcripts are being released in the Trump impeachment inquiry.

The transcripts are of testimony by Jennifer Williams, a special adviser for Europe and Russia to Vice President Mike Pence, and Tim Morrison, the former senior director of European affairs at the National Security Council.

Democrats leading the investigation are pushing out transcripts ahead of a rush of public hearings scheduled for next week.

The probe revolves around Trump’s push for Ukraine’s new president to conduct investigations of Democratic rival Joe Biden and his son, while the White House was withholding military aid to the country.

House impeachment investigators are hearing from a White House budget official in closed-door testimony at the Capitol.

Lawmakers convened Saturday to interview Mark Sandy. He’s the first official from the Office of Management and Budget to defy President Donald Trump’s instructions not to testify. Like other witnesses in the investigation, Sandy was expected to receive a congressional subpoena to appear.

Investigators are eager to hear from Sandy as they scrutinize the administration’s decision to withhold military aid from Ukraine.

The holdup of that assistance came as Trump was asking Ukraine’s new president to investigate Democrats and Trump political rival Joe Biden. That request is central to the impeachment inquiry. Trump says he did nothing wrong.

More public hearings in the House are scheduled for this coming week.

How To Create An Excellent Procurement Team