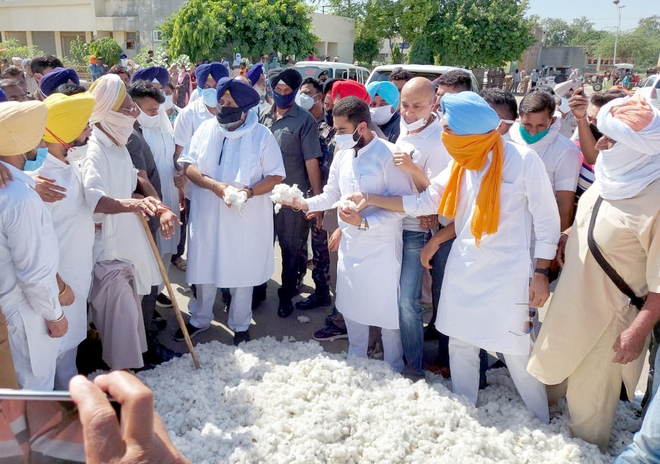 Shiromani Akali Dal (SAD) president Sukhbir Singh Badal today urged Prime Minister Narendra Modi to ensure that cotton was procured at the minimum support price (MSP) in Punjab, saying farmers were being exploited at the hands of private traders because the Cotton Corporation of India (CCI) was “hesitant” in procuring cotton in the state.

While talking to the media, he alleged that cotton farmers were suffering because the CCI had “deliberately delayed” entry into the market due to which farmers were forced to sell their crop at Rs 4,800 per quintal to private traders against the MSP of Rs 5,725 per quintal.

While interacting with farmers in the cotton yard, the SAD president assured them that the party would launch an agitation to force the CCI to procure cotton at MSP from October 12. He said he would not let the farmers be exploited under any cost.

He said 1.25 lakh quintals of cotton had arrived in the mandis in Punjab, but the CCI had purchased a minuscule amount of 12,000 quintals. “We demand constitutional guarantees for MSP and no farm produce will be procured at prices less than the MSP,” he said. — OC