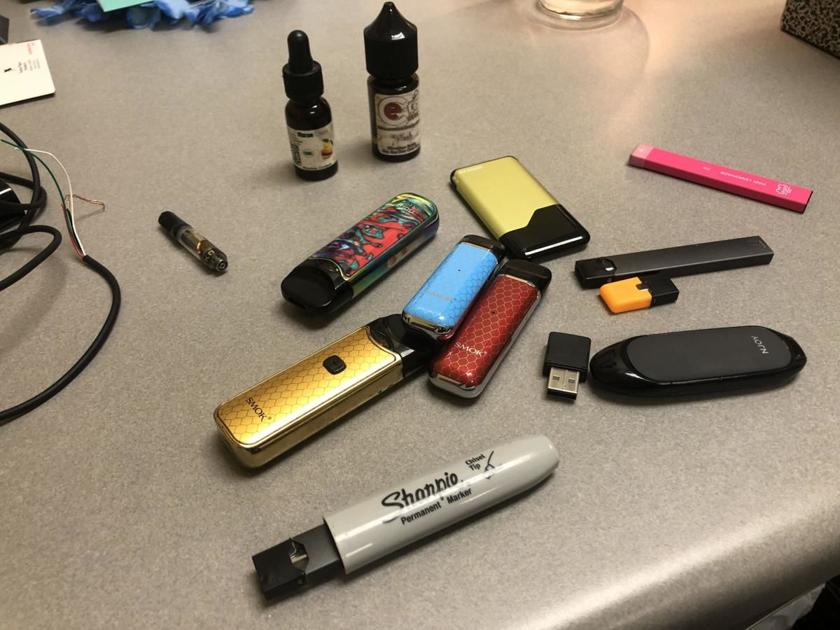 The majority of East Texas school district leaders say the use of vaping devices are on the rise over underage tobacco use and they have had to adapt school policies to address the troubling trend.

The Texas Association of School Boards requires, by state law, school boards to prohibit students from smoking or possessing e-cigarettes (vaping devices) or tobacco products on or off school property or at any school sanctioned events.

While TASB requires districts to prohibit the practice, districts are allowed to adopt their own disciplinary policies for how they feel best to deter the use among their students and some districts are taking a multi-tiered approach of both punishment, treatment and prevention to address the growing trend.

“Yes, the number of students vaping on and off campus appears to have increased dramatically,” Harleton Superintendent Brian Gray said. “As of now, we have surpassed the total number of vaping related discipline referrals from last year. The use of vaping devices is a growing problem on campuses across the state of Texas and the nation.”

More than 5 million teens across the country use e-cigarettes and the majority report that Juul is their brand of choice, according to a recent federal report.

Vaping devices are also being used as a new alternative to smoking marijuana. Marijuana companies in states where the drug is legal have said vaping products now account for at least 30% of their business, according to a report in the New York Times.

“The number of students smoking cigarettes and using tobacco products is considerably lower than students’ use of vaping devices,” Gray said. “Vaping devices are very compact and have become a status symbol among students. Due to marketing practices, design elements, ease of procurement, the ability to reload with controlled substances, and the quick hit access to higher levels of nicotine, smoking cigarettes appears to be declining rapidly.”

According to the Texas Tribune, some Texas students are facing felony charges because they have vape pens with THC, the mind-altering ingredient in marijuana. Using nicotine in vapes also is illegal for people under the age of 21, according to state law.

Vaping laws are being considered at both the state and federal levels in recent months due to several reports of death and other injuries in youth due to vaping.

The Centers for Disease Control and Prevention investigated severe lung injuries and deaths tied to vaping in the summer of 2019 and found more than 2,400 people had been hospitalized and at least 52 people had died by the end of 2019. Texas accounted for more than 200 of those injuries and one death, according to the study.

“The problem is growing. We have seen an incredible increase in vaping and vaping devices,” Marshall ISD Superintendent Jerry Gibson said. “Vaping is more prevalent among students and a violation is the same as tobacco use which is 10 days DAEP placement.”

In East Texas, that health care concern for students has prompted districts to take an approach of both punishment, deterrence and education.

Disciplinary measures for students caught vaping or possession vaping devices on school property or at school events can range from a call to their parents or guardians, to arrest. In most cases locally, the students’ guardians would be notified and the student would be required to serve a few days in an alternative campus designed for discipline and rehabilitation.

“It would depend on the circumstances, but we would probably include notifying the parents and require the students serve a few days in the Campus SAC or the District DAEP,” Waskom Superintendent Jimmy Cox said.

Cox said his district also combines discipline with prevention by teaching about tobacco use in Health classes and in the Character Education program.

“We provide our students access to outside professionals and the latest available educational information concerning the dangers of vaping and tobacco use,” Gray said. “We are constantly evaluating and adapting our program to ensure the maximum positive impact for our students.”

Karnack ISD Superintendent Amy Dickson, whose district serves kindergarten through eighth grade students, said vaping has not been found to be a prevalent problem on her campus and Jefferson Junior High School Principal Tim Phy said his campus has seen less than a handful of incidents in the past several years.

He is starting early with education and prevention to keep his students from getting hooked on the popular devices.

“We had a speaker come in the fall and talk to sixth through eighth graders about negative effects of vaping,” he said. “We have a high school student coming today to talk with seventh and eighth graders. This student is part of a tobacco prevention group on the Jefferson High School campus. The group is called Dawgs Against Tobacco, and this student is one of their Teen Ambassadors.”

In Elysian Fields, Superintendent Maynard Chapman said his district is seeing almost equal use of vaping and tobacco.

“We have noticed an increase in students using vaping devices but vaping use is comparable with students using cigarettes and chewing tobacco,” Chapman said. “If students are caught vaping or using tobacco on campus, they will receive up to 30 days in DAEP and they would also be issued a ticket. We have held a vaping education assembly and various faculty members are constantly speaking to students on the dangers and risks of smoking and vaping.”

How To Invest In Bonds – Forbes Advisor UK

E.U. proposes suspension of $7.5 billion in funding for Hungary