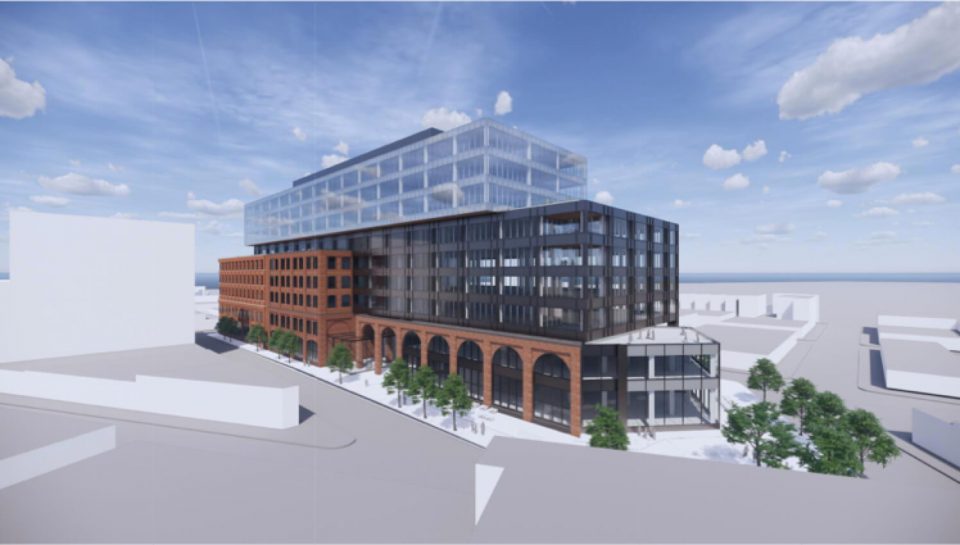 The real estate firm pitched the four-to-nine-story construction project to Community Board 1’s Land Use committee at a virtual meeting on Oct. 5 as a new and improved version of 25 Kent, a similarly-sized building they completed nearby last year — except that now, they will actually have a tenant from day one.

“This is in many ways similar to 25 Kent with one exception, which is that we know who the manufacturer is,” said Jeff Fronek, the director of acquisitions at Rubenstein. “25 Kent was 100 percent speculative, we didn’t know who the tenants would be, we hoped that they would show up.”

The development site sits on a pentagonal lot bordered by N. 15th, Gem, and Baker streets, along with Meserole and Wythe avenues, and currently features low-rise industrial space.

Acme, who has operated in the borough since the early 20th century and moved to Gem Street in the 1950s, and has been trying to find more modern and spacious digs in Brooklyn — but, with costs prohibitively high, they turned to their new development partners from the City of Brotherly Love.

“We’ve been able to get by with an aging facility, obviously we want to modernize and give ourselves a little room to grow, but as the neighborhood has changed, the cost and complexity of operating a food manufacturing business in Greenpoint is trickier and trickier,” said the company’s fourth-generation owner, Adam Caslow.

The new 95,300 square-foot fish factory — which developers would build first — is about 30,000 square-foot larger than Acme’s current facility and would allow them to process more gilled goods, according to Caslow, who said it would be too expensive for him to expand in the borough without the developer’s support.

“If we were to do this on our own it’s really less expensive for us to just do it elsewhere but we really want to stay here and that’s what this project is all about,” he said.

The far bigger part of the proposal will be the nine-story office development of over 580,000 square feet, with ground-floor retail, 150 parking spaces, and roughly 22,000 square-foot of open space — including a large pedestrian plaza at the corner of Wythe Avenue and N. 15th Street.

The developers claim that the building will house up to 2,000 jobs in the coming years, and that the revenue from the bigger building will cross-subsidize an affordable state-of-the-art manufacturing space for Acme.

For comparison, 25 Kent — which the developers originally billed as a potential second headquarters for e-commerce giant Amazon — is eight stories, houses about 500,000 square feet, but has only signed leases for about a quarter of its area since opening a year ago, according to Fronek, who remained optimistic about filling that and the proposed space.

“We do see more and more companies looking at Brooklyn, over time, because that’s where the employees are,” he said.

The developers plan to ask for a rezoning of the lot through the city’s roughly seven-month land use review procedure, starting next month, which would allow them to build the upper three stories of the taller section about 20 feet closer to the street, according to their land use attorney Ray Levin.

If all goes according to plan, the entire project will be finished with construction by mid-to-late 2024, according to Michael Johnston, a spokesman for the developer.

Members of the CB1 committee said they were glad Acme wanted to stay in the neighborhood, but one civic guru worried that the project would be overly imposing on the nearby low-rise Greenpoint Historic District.

“Even though from the street around this building, the building may not have the sense of this nine-story building above you, but from the Greenpoint Historic District, three blocks away, you’re going to really feel this building,” said committee co-chair Trina McKeever.

Another civic panel member said he was an avid supporter of the fish business, but questioned whether real estate bigs had to attach such a large office complex to it in order to make it work.

“I’m a supporter of Acme Fish, [in] my refrigerator is a couple packs of Gravlax right now, I’ve been religiously going there every Friday for decades,” said Sante Miceli. “I understand the narrative of having Acme there and I love to have you there but I’m questioning, is this necessary, this jumping to such a huge development.”

Fronek countered, arguing that 25 Kent is just a few blocks away, meaning the new building wouldn’t be alone in its relative height — and stressed the potential benefits of new jobs and investment amid a financial recession, as was recently the case with the collapsed Industry City rezoning.

“We have to be investing and I think it’s smart for New York to say yes to investment right now,” the developer said. “Saying no to the investing and refusing to step into the future is going to be something we’ve seen happen elsewhere and I just think that we should be more entrepreneurial.”