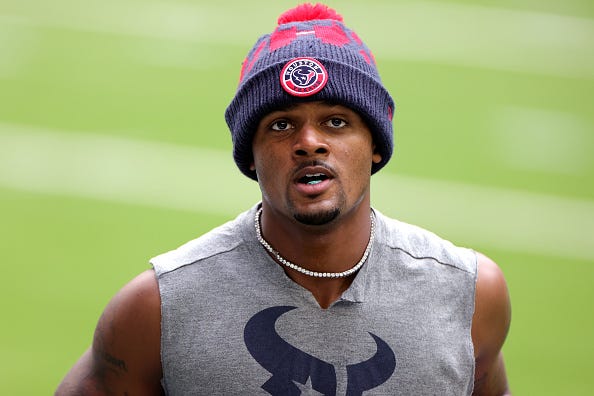 The Deshaun Watson trade rumors do not seem as if they will be going away any time soon.

Watson, who signed a $156 million extension with the Texans before the 2020, has a no-trade clause in his contract, but according to ESPN’s Chris Mortensen, Watson “could play hardball” with the Texans about a trade.

He adds that “informed speculation from a source” suggests Watson would consider the Miami Dolphins as a potential destination in which the Texans would receive Tua Tagovailoa and additional compensation.

Sources say Watson could play hardball with Texans about a trade. His new $156 million contract includes a no-trade clause but informed speculation from a source is that he would consider the @MiamiDolphins in which Tua Tagovailoa and additional compensation goes to Houston.

Prior to Mortensen’s report on Sunday, Adam Schefter reported that Watson was among many within the Texans organization upset that owner Cal McNair did not follow the advice of the search firm he had hired to assist in the GM search, which would have likely resulted in Steelers VP Omar Kahn being hired. Instead, Patriots exec Nick Caserio got the job.

A source described Watson’s anger level as “a 10,” whereas when star wide receiver DeAndre Hopkins was traded last year Watson was at “a 2.”

Speculation of a possible Watson trade first surfaced on Thursday, when it was reported he had broached teammates about the possibility of requesting a trade.

According to Mortensen, Watson is still angry about the team’s insensitivity to social issues and hiring practices, especially after the team failed to interview Chiefs offensive coordinator Eric Bieniemy.

Yet, Mortensen adds that while those issues are important to Watson, the state of the franchise is where his central problem lies.

Watson’s unhappiness with Texans is not strongly connected to social justice issues, a source close to the quarterback clarifies, even though those issues are important.
His unhappiness is more current with state of franchise and what has transpired. https://t.co/wV4UDEIYzd

Watson, 25, is coming off a career year in which he led the league with 4,823 passing yards while also throwing for a career-high 33 touchdowns compared to a career-low seven interceptions.

The team finished 4-12, however, marking the first time as a starter Watson missed the playoffs.

OPINION: If you want political unity, you can’t hate the other side