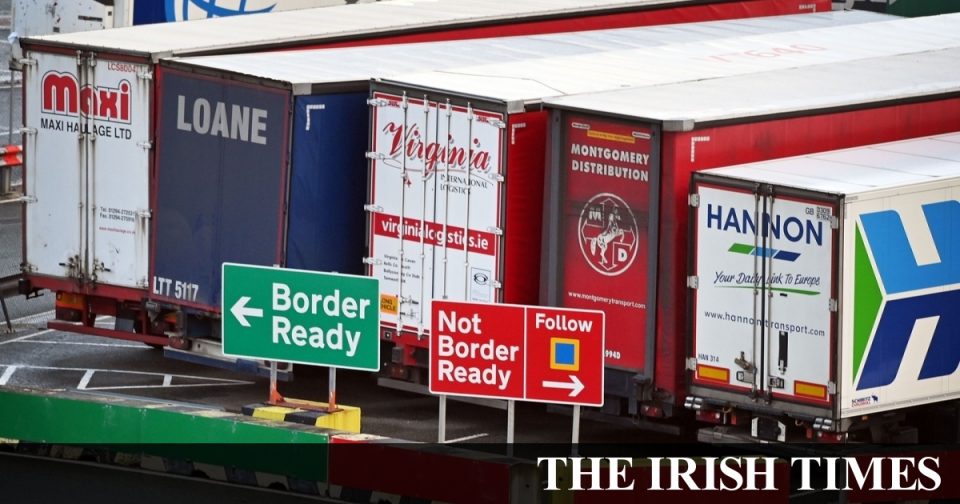 Delays linked to post-Brexit border controls are expected this week as freight traffic arriving from Britain increases, new technology is tested and traffic systems set up for a surge in checks, Tánaiste Leo Varadkar has said.

Monday will be the first day back for many after the Christmas break, and greater volumes of roll-on, roll-off lorry traffic will follow after the traditionally quiet new year period for freight traffic.

Stena Line and Irish Ferries will operate full ferry services from Holyhead to Dublin, the busiest Irish Sea crossing for trade between the State and Britain, from Monday, with each company having a ferry arrive at roughly the same time in four waves over the course of the day.

“We will see next week traffic increasing at the ports and that is really when systems will be tested. We think there will be some delays. We will manage them,” Mr Varadkar, the Minister for Enterprise, told RTÉ Radio on Sunday.

Traffic volumes were light last Friday, the first day of post-Brexit border controls on lorries arriving from Britain, and over the weekend.

Some lorries were turned back and prevented from boarding ferries at Holyhead because they did not have the correct paperwork or did not input customs data correctly into the systems.

Most lorries arriving on the first ferries in the hours after Brexit came into effect last Thursday did not know whether or not their goods had to be checked by customs, leading State agencies to call on hauliers to check on Revenue’s website 30 minutes before docking.

Mr Varadkar said that his own department and the departments of Agriculture and Health, along with Revenue, were monitoring traffic flows through the ports on a daily basis.

He told the This Week programme that there were “small issues coming up” as a result of the new trading arrangements with Britain.

Food importers have raised concerns about delays being caused by the requirement to give the Department of Agriculture 24 hours’ notice of food products of animal and plant origin arriving at Dublin Port to undergo strict sanitary and phytosanitary (SPS) checks at inspection facilities.

Food Drink Ireland, part of business lobby group Ibec, has called on the EU and the UK to introduce “facilitation and easement measures” under the chapter covering SPS processes in their post-Brexit trade deal that allows them to review border clearance processes to facilitate trade.

“We think this should be a priority issue to reflect the reality on the ground of highly integrated Ireland-Great Britain supply chains and the friction and costs now being faced as a result of Brexit,” its director Paul Kelly said.

“This lengthens the supply chain where we might have been able to put requests for goods at 6pm on the evening and have them arriving into Dublin at 6am the next morning,” he said.

“That is going to have to be extended by at least 12 hours.”

Minister for Transport Eamon Ryan said the low volumes of transport and trucks in recent days has meant State agencies “have been able to tease out” problems but he does not expect major traffic or travel disruption.

“It will be a pain in the neck for the companies because there is a huge amount of background bureaucratic forms, procedures to be filled out, but once we get used to that I don’t believe it will be disruptive to our own everyday life,” he told Newstalk’s On the Record programme.

Covid-19 pandemic swept through the Americas in 2020 | Features Local

Hapag-Lloyd gets 2020 off to decent Start despite Coronavirus Pandemic

The Strategic Importance of Sea Transportation Will Continue in 2021