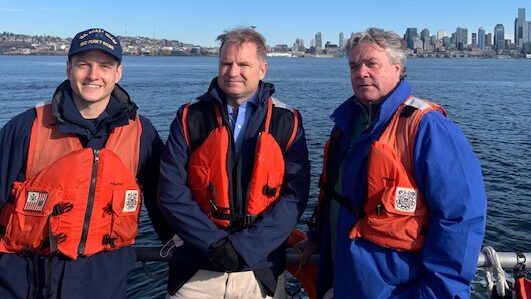 The government typically is not the preferred place for creative ways to improve how private businesses operate, but Federal Maritime Commissioner Carl Bentzel may be changing that as he leads an effort to make freight supply chains work much better.

Importers, exporters, drayage truckers, warehousing and distribution, and railroads have all participated so far, with several more meetings upcoming with marine terminals and ocean carriers.

In this Q&A, FreightWaves checks in with Bentzel on what he has learned so far and his vision for what will make MTDI a success.

FREIGHTWAVES: Commissioner, you have been convening MTDI meetings every week since December, how have they been going?

BENTZEL: “Really well. We asked each of the different industry segments what information they have, where do they see data gaps and what sort of data they would like to see from other segments of the industry. They’re a little bit more reluctant to share information about the data they have, but they always are very outgoing about where they see gaps in other places.

“We’re not looking to create new datasets, but rather utilizing existing sources of data and hopefully harmonizing how it’s provided.”

FREIGHTWAVES: Have you been surprised by anything you have learned so far?

BENTZEL: “It’s been surprising how antiquated and labor intensive some of these information processes are — you have to be a detective to go through and figure out all the conflicting information. For example, the Port of Houston Authority said most of their vessel information was being transmitted by email. You would think they might have a big board showing what ships were coming in and their status. There are companies that use AIS [Automatic Identification System] data, but cargo vessels are mixed in with yachts and tugboats and everything else. It’s just not where it should be in terms of being usable and accessible.”

FREIGHTWAVES: What concerns are you hearing among stakeholders?

BENTZEL: “They don’t want us to be overly prescriptive in how we would require data to be provided. So the effort is to embrace existing information systems that are out there and not require — unless it’s necessary — new information to be generated.”

FREIGHTWAVES: Any particular concerns from labor?

BENTZEL: “Yes, the issue of measuring performance in the terminal itself and how it could potentially be used as a tool against them in labor contract negotiations. But we explained we’re not going to get into that level of granularity — we’re not looking at the number of container moves from a gantry crane. My honest opinion on this is port metrics is a product of many things, such as full distribution centers that can’t accept cargo or ports backed up due to congestion. We’re just really interested in information related to the movement of cargo in order to facilitate the next move. It won’t get into issues that influence collective bargaining.”

FREIGHTWAVES: What is the long-term benefit of sharing information in the way you envision?

BENTZEL: “There really isn’t much room to grow at the major port complexes. So unless they’re more efficient in handling cargo going forward, they’re going to run into challenges. By having advance information to the maximum extent that you can, it allows them to adjust when they need to adjust, to forecast better, to maximize the utilization of the space that’s available. And I think it gives them a better chance of avoiding what occurred over the last two years. This congestion cost, in my view, equates to trillions of dollars in economic loss. Inflation is directly attributed to maritime movement challenges. And it’s not just the price, it’s about whether you’re able to get the product at all.

FREIGHTWAVES: The Biden administration recently unveiled its own data-sharing initiative called FLOW that will be overseen by DOT. How does that initiative line up with what you’re doing at FMC?

BENTZEL: “I think FLOW will be very helpful and constructive. We’re going to look at it internally as part of MTDI, and we’re working with them to see if it’s exposing the same information that we’re hearing through our own process. So I think it’s a tool to validate or provide additional input that we hadn’t considered.”

FREIGHTWAVES: What about the overlap in terms of participants — does that undercut what either DOT or FMC is looking to accomplish?

BENTZEL: “DOT is looking at operational approaches, while the FMC initiative is mission-driven — meaning, we have regulatory authority over not only the carriers but the marine terminal operators, the ports. DOT does not have authority to issue standards on port performance, theirs is an effort to educate on the process of information flow through the supply chain. Think of it this way: We’re working towards a baseline. If you don’t have a lexicon, a baseline for data in terms of how it’s harmonized, then you don’t have a foundation on which to build FLOW or another type of community portal.

“Also, if they come up with recommendations on how the data elements should be supported and made public, that’s great. Ultimately that’s the objective, to set data standards. We’re focused on that right now, and the second part is determining how to make it available to the public. We’re looking at doing a joint meeting in the fall with DOT and the Commerce Department after our data summit on June 1 and we’ve had time to digest comments related to our recommendations.”

FREIGHTWAVES: Could you tell us more about the summit in June?

BENTZEL: “This will be a working summit in which all panelists from our weekly meetings will be invited to participate in person. We will be unveiling our proposed data dictionary, identified data gaps and proposed recommendations. We will have breakout sessions with participants to hammer out and refine our findings. There will be a virtual component as well.”

FREIGHTWAVES: Will there be a regulation or rulemaking at the end of this process?

BENTZEL: “The FMC has authority to impose reasonable requirements and regulations on the handling, storage and delivery of cargo, and I believe this encompasses the system of information that’s provided attendant to the cargo being delivered. So I think we’re unique in the U.S. government with authority over these practices at ports. So if we can get consensus on data standards, it would lead to a regulatory consensus of its own. Because if we’re going to say we want national standards, and we can clear hurdles towards harmonizing data, there will be some determination requiring how to implement national standards.”

FREIGHTWAVES: And will the end product be a data portal that will be publicly available?

BENTZEL: “Yes. If we’re going to be making this information publicly available, there’s no way around it — there will have to be a system out there that can be accessed. Right now you have to go to 50 or 60 different websites to figure out what’s going on — from trucking to distribution centers — so it has to be put together in a way that’s accessible. But that’s phase two. The first goal is getting harmonized data standards in place.”

Register today for the Future of Supply Chain #FOSC22

The leading voices in supply chain are coming to Rogers, Arkansas, on May 9-10.

Supply Chain as a Service (SCaaS) market is expected to reach $ 12.21 billion by 2027, growing at an estimated CAGR of 8.2% over the forecast period