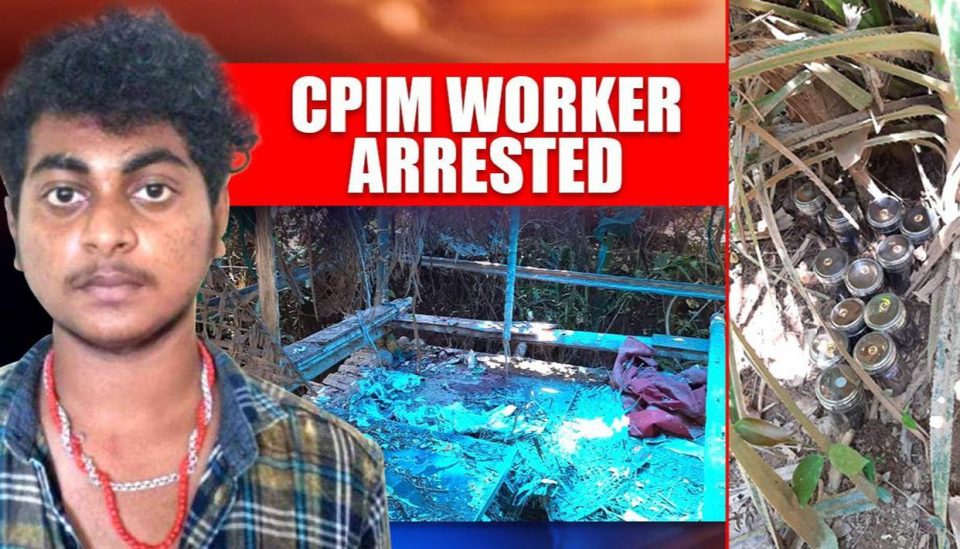 In the aftermath of the explosion at the illegal bomb factory in Kadirur, Kerala, one CPIM party worker named Ashwath has been taken into custody in connection with the explosion. The 22-year-old CPIM worker is the third accused in the murder attempt of C.O.T Naseer, a rebel CPIM leader.

In the police search at the factory on Saturday, the police discovered a country bomb as well as steel bomb. Earlier, 12 steel bombs were recovered from the makeshift tent. Police stated that the explosion happened while making the bomb.

The investigation team has revealed there were six people in the factory during the time of the explosion. Hunt is on to find two more who are in the hiding. The bomb squad and a special dog squad was brought in to conduct the search of more explosives in and around the villages.

The explosion took place at an illegal bomb-making factory at Kadirur panchayat in Kannur at around 1.30 PM on Friday. The explosion took place at the village panchayat of Kadirur, a citadel of the Communist Party of India -Marxist (CPI-M). Three members of the CPIM are grievously injured in the explosion. One of them also includes an accused in the TP Chandrashekhar murder case who was later exonerated by the court.

The blast has embarrassed the ruling CPIM party at a time when District collector T V Subhash had called an all-party meeting, just a day before this incident, to end the increasing political violence in the district. Kannur SP Yatheesh Chandra visited the place.

The CPIM party machinery along with its youth wing DYFI  has been on an aggressive mode ever since the double murder of their cadres in Venjaramoodu last Sunday, a day before the festival of Thiruvonam. There have been numerous reports that pointed Congress workers’ hands in the murdeṛ. As reported by Republic Media Network on September 5, the bombs were being made by CPIM workers to avenge the double murder allegedly committed by Congress workers.

Battling diabetes and aiming to be a doctor: Emirati girl, 17, recounts her struggles