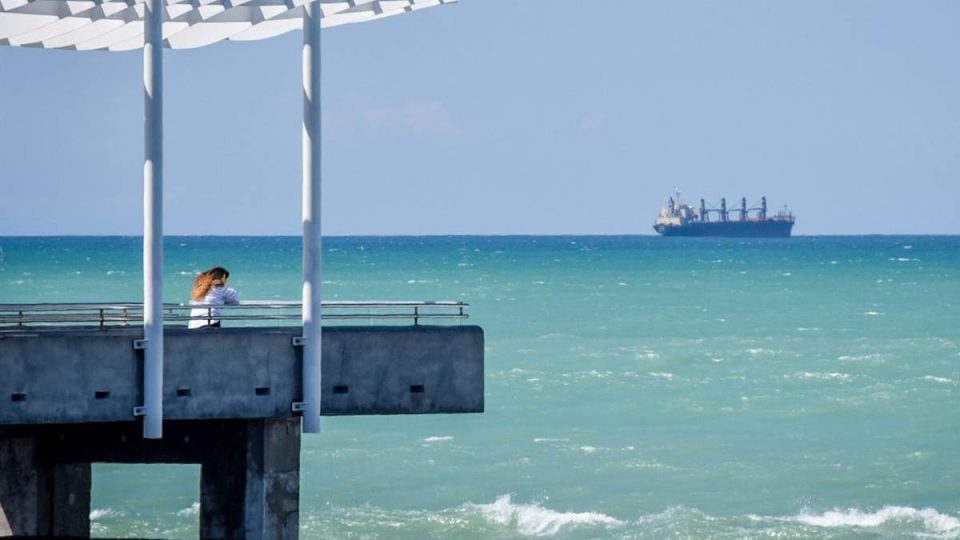 The Ken Rei logging ship was due to collect logs in Napier but remains offshore and has not been into Napier Port. Photo / Ian Cooper

Napier Port is refusing to let a ship with 21 close contacts of a port worker who tested positive for Covid-19 dock, meaning crew could be forced to sail to Auckland.

The Ken Rei logging ship was due in port on Sunday to load logs but has been anchored off the coast since Sunday afternoon.

It is carrying 21 crew, all of whom are considered close contacts of New Zealand’s newest Covid-19 community case.

The male port worker, a marine electronics engineer from Auckland, who went to New Plymouth for work last week, had tested positive for Covid-19 on October 16.

Director General of Health Dr Ashley Bloomfield said at a press conference on Monday the crew were getting daily health checks via radio and none had been showing symptoms.

The people on the ship had not yet been tested and options were being looked at to facilitate this, including whether a vessel or helicopter could come out to the ship or could be sent to Auckland.

Napier Port did not want the ship to berth, Bloomfield said.

What to do if any of the 21 crew on the ship off Napier tested positive was still being worked through, he said.

The ship turning into a petri dish for Covid-19 was one of the considerations, he said, and crew members were trying to take precautions.

When asked about dealing with the ship Bloomfield said “there is urgency.”

But all crew members were asymptomatic, and anchoring off the coast at the moment was not the cause of any frustration while the next move was being resolved.

The Ministry didn’t have a preference about whether the ship docked in Napier or elsewhere, he said.

A Napier Port spokesperson on Monday confirmed that the ship remains offshore and has not been into Napier Port.

“Our position remains that the ship should stay anchored offshore. We will await further instructions and assist public health as necessary.”

A Hawke’s Bay DHB spokesperson said it continues to work closely with the Ministry of Health and port officials.

The port workers’ positive test highlighted the need to limit the number of international ports in New Zealand and implement domestic coastal shipping on a hub and spoke model, the union said.

He said nearly all domestic sea freight is carried by international ships running international crews who are not covered by New Zealand law meaning “every single one” of the ports is an international border point and “it puts our members and the public at risk.”

“There’s a reason our international airports are limited to large sites that can resource strong border security, we should be doing the same with our ports.

He said there should be two in the North Island and two in the South Island which would be “secure and safe points of entry for goods.”

“All other cargo should be shifted by New Zealand flagged vessels that operate under our law and are staffed by people from our team of five million.

Fleetwood said the union has been talking to the government “for a while” about the issue and both Labour and the Greens have “repeatedly backed the need to strengthen New Zealand flagged coastal shipping.”

But Bloomfield said the current port measures were “very good” and included regular testing, including those who accessed ships.

The worker was being tested fortnightly, and Bloomfield said one thing to look at was whether such workers should be tested two to three days after finishing a long shift working on a ship.

Is Americold a Buy? | Millionacres