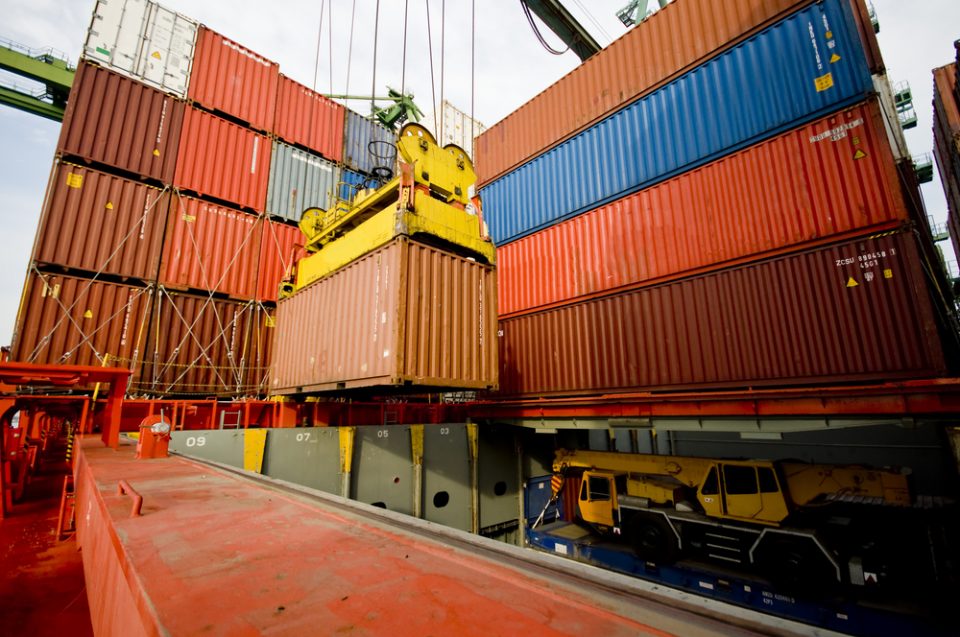 By Brendan Murray (Bloomberg) — The humble shipping container has a new status in the Covid-19 pandemic: hot commodity.

Shortages of the ribbed steel boxes that have plied the global economy for a half-century are plaguing transpacific routes in particular. The dearth is boosting the purchase price of new containers and lease rates by 50%, snarling port traffic, adding surcharges and slowing deliveries heading into the holidays.

A surge in Chinese exports and robust consumer demand in the U.S. help explain the tightness, and major shipping liners like Hapag-Lloyd AG are scrambling to reposition their bigger 40-foot-long containers from less busy parts of the world. Nico Hecker, Hapag-Lloyd’s director of global container logistics, dubbed it a “black swan” moment.

The German sea-freight company is “experiencing the strongest increase in 40-foot demand following one of the strongest decreases in demand ever,” Hecker said in a post on the company’s website last week. “The containers must be returned to China as quickly as possible to be equipped for an expected strong fourth quarter.”

The squeeze shows up in an indicator developed by Container xChange, an online platform based in Hamburg, Germany. The latest reading of its Container Availability Index was 0.04 for the 40-foot extra-tall boxes — the size popular for consumer products — in Los Angeles, while Shanghai slumped to 0.22. On a scale of zero to 1, the dividing line between surpluses and shortages is 0.5.

Dire predictions that global trade would collapse this year prompted container carriers to cancel sailings to underpin freight rates. Those forecasts proved far too pessimistic, though, and industry observers now say a sharp second-half rebound may mean container volumes for 2020 end up not far off levels reached in 2019.

Economists have long debated whether international commerce lifts all economic boats, and many nowadays agree that it does, in theory at least. But the market for a commodity like shipping containers is very much a zero-sum game, where winners and losers are decided by who does and doesn’t have their hands on the available supply.

“I’ve had no used containers for sale for three or four weeks now,” said Chris Osborne, managing director of Budget Shipping Containers in Birmingham, U.K. “I am missing out on sales, definitely, by not having the stock there but I’m also not losing them to competitors because they’re in the same boat.”

About 35 million shipping containers are currently in use globally, making some 170 million full trips a year, according to Florian Frese, marketing director at Container xChange. About 55 million of those trips are made when they’re empty — on returns trips or as shipping companies realign them with the demand.

The current scarcity means importers are facing longer waits for their goods and might pay extra fees to secure the transport equipment. The impact can ripple beyond the flow of goods between the world’s two largest economies.

“The more profitable the China-U.S. lane becomes, the more incentivized carriers are to divert containers from other lanes, increasing the prices on shipping in secondary markets,” said Eytan Buchman, chief marketing officer at Hong Kong-based Freightos, an online shipping marketplace. “Historically, this has been a driver of higher intra-Asia rates, with spare containers located in Asia diverted to the transpacific route.”

Shipping liners own roughly half the world’s containers, and the rest are owned by lessors including Hamilton, Bermuda-based Triton International Ltd., whose U.S.-listed shares jumped 34% in the third quarter, more than quadruple the increase in the S&P 500 Index. Shares of Textainer Group Holdings Ltd., a San Francisco-based container lessor, surged 73% last quarter and CAI International Inc., a leasing firm also located in San Francisco, jumped 65%.

“We hear from customers that they expect a fairly significant container shortage to remain through at least Chinese New Year” in mid-February, Brian Sondey, Triton’s chief executive officer, said on an earnings conference call in October.

He said leasing rates for new containers were up “well over 50%” from the second quarter and its inventory of 40-foot containers is as “close to full utilization as you can get.” Triton ordered $350 million worth of new containers for delivery in the first few months of 2021.

The beneficiaries of such booming demand are Chinese manufacturers that dominate the global market for newly built containers, the sales price of which has increased to about $2,500 each, from about $1,600 a year ago. Industry figures show the availability of dry-freight containers produced in China were down to about 250,000 20-foot equivalent units at the end of October, from 871,000 in May. Order books are full until April or May next year.

–With assistance from Richard Weiss.

All in it together restarting the wholesaler… – The Caterer.com