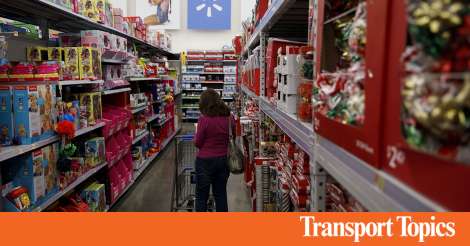 [Stay on top of transportation news: Get TTNews in your inbox.]

While retailers started preparing for the holiday season even earlier this year, consumers are still haunted by the ghost of supply chain past, survey data shows.

Last year, retailers struggled to get their holiday stock in time for the shopping season. At Port Houston, ships waited days for an opening to unload cargo and even longer for that cargo to be transported off the dock.

And consumers bore witness to it all. Parents fought to find coveted Sony Playstation 5s and Nintendo Switch OLEDs to put under Christmas trees. In a 2021 survey, more than three-quarters of consumers said they were worried they wouldn’t find the holiday items they needed. In October 2022 alone, U.S. consumers encountered more than 2 billion out-of-stock messages online, according to Adobe Analytics.

Retail and shipping industries say they are better prepared as many of the supply chain kinks have been worked out. In June, Port Houston added extra operation hours and began opening on Saturdays to handle increased trade and reduce backlogs. This year is on track to set a record for retail imports for the third year in a row, according to the National Retail Federation.

Most of those imports have already made it into the U.S. ahead of the busy holiday season. From January through June, retail import volume outpaced 2021 numbers, according to the National Retail Federation and Hackett Associates Global Port Tracker.

The reason behind it is planning ahead. Many retailers brought in products earlier than normal this year to avoid supply chain delays, according to the National Retail Federation.

TT’s Eugene Mulero joins host Mike Freeze to discuss the midterm elections, and what the fight for control of Congress will mean for trucking. Tune in above or by going to RoadSigns.ttnews.com.

In a Deloitte survey of 40 retail industry executives, all said they anticipate receiving holiday inventory on time, compared to just 57% in the same survey last year.

But consumers are expecting the opposite.

Over half of consumers surveyed by Deloitte expected stockouts in electronics and accessories, and 40% expect they won’t be able to find their favorite toys on the shelves.

“The consumer doesn’t have access to a tremendous amount of information as to what the inventory levels are at a company, and so they’re really speaking from past experience,” said Tony Torres, audit leader for Deloitte’s Houston office. “If you go back to last year, the supply chain was the Grinch of Christmas.”

Instead, more shoppers are heading to stores early or buying gift cards out of fear that retailers won’t have items on their lists in stock by the time Black Friday rolls around.

Nearly 40% of consumers surveyed said they’re likely to shop earlier than they did last year. Between the launch of Amazon Prime’s Early Access Prime Sale in early October and other major sales from Target and Walmart, Deloitte estimates that nearly a quarter of holiday budgets will be spent in the month of October.

On average, nearly a fifth of that spending will go to gift cards — the only retail category where surveyed shoppers plan to spend more this year compared to last year.

But that doesn’t mean traditional holiday shopping season is dead, Torres said. Nearly half of holiday shoppers surveyed plan to shop on Thanksgiving week, holding steady with rates from 2020 and 2021. And they’re set to be pleasantly surprised by the inventory they’ll see still on the shelves.