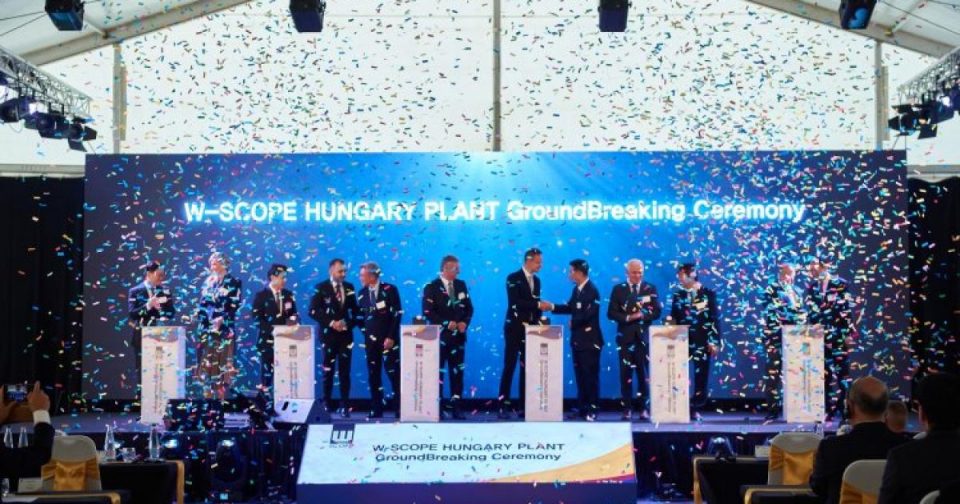 The city of Nyíregyháza, which will host the development, hopes to attract more foreign investment, regional services and logistics

On 18 October, Hungarian authorities broke ground on a new factory that will produce batteries for electric cars. The investment was made by the South Korean company W-SCOPE, with the future factory located in Nyíregyháza. According to an official statement, the investment would be around 300 billion Hungarian forints, or the rough equivalent of over 700 million euros.

In recent times, Hungary has been attracting a lot of foreign investment in the field of EV components. In August, authorities announced a massive 7-billion-euro deal with Contemporary Amperex Technology Co. Limited (CATL), a Chinese firm, to construct one of the biggest battery manufacturing facilities in the European Union.

The new W-SCOPE factory will cover an area of around 1.2 billion square metres and should provide jobs for about 1,200 people. The factory will start operations in 2024, according to an official statement by Minister of Foreign Affairs and Trade Péter Szijjártó.

Minister Szijjártó also pointed out that trade relations and investments between South Korea and Hungary have been increasing. Now, the East Asian country has grown to be the third-largest investor in the country, with the bilateral trade turnover between the two reaching a record 5 billion dollars.

This would be, as Nyíregyháza Mayor Dr Ferenc Kovács pointed out, a major milestone in the development of the city. He explained that the W-SCOPE plant could help to trigger other investment interests in the region and its industrial park.

Furthermore, it could also help boost vocational training and logistics with a slew of knock-on effects that an investment of this size could bring with it.

TECH FOR REFUGEES INITIATIVE AND FLEXPORT.ORG ARE EXPANDING PARTNERSHIP TO HELP REFUGEES IN UKRAINE, PAKISTAN, HORN OF AFRICA