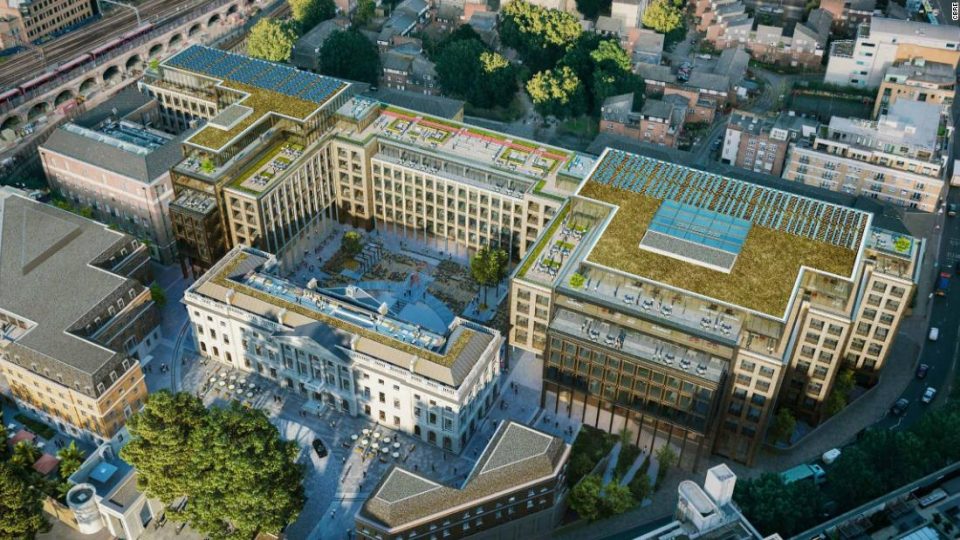 China plans to refurbish the building and establish its biggest diplomatic mission in the world at the site, set just back from the River Thames on the outskirts of London’s financial center. It could be years until the embassy actually moves, but it’s already facing opposition from some local councilors and residents.

But accounts of abuse at the camps — including forced labor, forced sterilizations of women and sexual assault — are growing.

“I’m very perplexed as to why the People’s Republic of China would want to be on the edges of a neighborhood that is so multi-ethnic, multi-religious. The Muslim community has a large base here,” said Mo Rakib, a Muslim resident who is active in community affairs.

“The Muslim community is very linked with each other, regardless of what part of the world we’re from. There’s always a feeling of affinity from one community to the other based on shared values and shared faith. And that’s no different for the Uyghur community.”

Some local opposition councilors say that they too are concerned about the implications of embassy’s move and want the issue debated at council meetings. But they don’t outright oppose the mission coming into their neighborhood.

What’s playing out at this borough and its council isn’t so different from what’s happening in the UK’s national government, as well as those of many other democracies, for that matter — striking the right balance between reaping the economic benefits of working with China and criticizing it for rights abuses is difficult.

Tower Hamlets is one of the most deprived boroughs in London. Its mayor, John Biggs, has welcomed the Chinese mission as “a vote of confidence” in the borough as an “open and dynamic place to live and work,” according to local reports.
Rabina Khan was one of several local councilors who, at a council meeting Wednesday, tried to introduce an emergency motion — usually reserved for urgent matters — on China. It was rejected due to time constraints, the mayor’s office told CNN, adding it would discuss the issue at the next meeting in November.

The motion calls on the council to send a letter to Chinese Ambassador Liu Xiaoming expressing its concerns over the country’s treatment of Uyghurs and other Muslims, as well as its clampdown on pro-democracy protesters in Hong Kong.

“What we want is to send a message to China that if they move here, they need to be aware that our borough — in all of its diversity — is a place where we’re very proud to stand up for human rights,” Khan said.

Biggs said in a statement to CNN that Tower Hamlets was “open and tolerant” but also wants “to be good partners and support good relationships.”

He acknowledged, however, that he and the community were concerned about China’s rights record, “in particular the appalling treatment of the largely Muslim Uyghurs,” and that it was right to challenge the Chinese government on the issue.

Any problems with the embassy plans could prove troublesome for China’s international image. At a ceremony to hand over the site to the Chinese mission in 2018, Ambassador Liu said he hoped the embassy would become a London landmark and that the new premises should be a symbol of China’s current role and influence in the world.

CNN has contacted the Chinese embassy and the Chinese Ministry of Foreign Affairs for comment but has not received a response.

Demonstrators on Thursday gathered in dozens of cities around the world to protest China’s treatment of certain groups in the country, including Uyghurs, Tibetans and people in Hong Kong.

One of the organizers, Rahima Mahmut from the World Uyghur Congress in London, said countries were choosing trade over human rights.

“It’s very obvious that trade relationships are being prioritized, not just in the UK. We see this in African countries and China’s neighboring countries that are already trapped in debt to China. And Turkey too. Turkey was the country that we Uyghurs always felt we could rely on or seek refuge in,” said Mahmut, a Uyghur who left Xinjiang in 1997.

Turkey is increasingly relying on China to dig itself out of debt. It was previously one of the few Muslim-majority countries to have criticized China’s actions in Xinjiang, early last year denouncing the camps as a “great shame for humanity.” It has since softened its tone toward Beijing, and President Recep Tayyip Erdogan’s AK Party voted against launching a probe into the alleged abuse against Muslims in China.

The UK took some action against China following its implementation of the National Security Law for Hong Kong, which has stifled a pro-democracy movement in the former British colony. Westminster opened a pathway for citizenship for Hong Kong residents with the right to a British National Overseas passport, which includes potentially 3 million Hong Kongers.

The UK has also condemned China several times over the camps in Xinjiang, including at the recent UN Rights Council meeting, where the Foreign Office’s junior minister Tariq Ahmad called on Beijing to allow a UN team “unfettered access” to Xinjiang to investigate allegations of abuse there.

But activists like Mahmut say they want so see the UK go further and impose sanctions on the people and organizations running the camps in Xinjiang.

In a recent letter to a British MP, Foreign Secretary Dominic Raab said the government was “carefully considering” new designations on its sanctions list in regard to China over the National Security law and postponement of elections in Hong Kong. The Liberal Democrats, one of several opposition parties, is calling for more sanctions in relation to the treatment of Uyghurs as well.
As is the case with many of China’s trade partners, there is reluctance in the UK to confront Beijing over rights. China is the UK’s sixth-biggest export market. That’s a rapid rise from 26th place in 1999.

China has shown that it’s not afraid to wield retaliatory economic tools in response to political pressure, as it did in the case of Australia, imposing tariffs of 80% on barley imports soon after Prime Minister Scott Morrison led calls for an inquiry into the origins of Covid-19, which was first reported in central China late last year. Beijing said that the tariffs were in response to Australia selling the grain too cheaply.

The strongest response against China this year has come from the US, which has issued sanctions over Beijing’s treatment of Muslims in Xinjiang, while its House of Representatives last week passed a forced labor bill that would effectively ban imports from the region if it becomes law.

There are calls by opposition parties in the UK to do the same, but Steve Tsang, director of the School of Oriental and African Studies’ (SOAS) China Institute in London, said the US may struggle to get its usual allies to follow its lead.

“What would be useful is if countries, not just in Europe, but if all countries that care about human rights and ethical trading insist they will stop working with companies operating in Xinjiang unless they can independently verify the supply chain conditions,” he said.

“But the Trump administration has discredited itself in terms of moral leadership. I mean, who believes Donald Trump when he says he defends human rights?”

While Tsang does see the public growing more interested in the Uyghur issue, he says more evidence needs to come out about the alleged abuse in Xinjiang to really galvanize a public response that will force governments to confront China more aggressively.

In Tower Hamlets, councilors are mulling how to welcome the opportunities the new embassy will bring to their neighborhood while sending a clear message to Beijing that it does not approve of rights abuses.

One of them, Andrew Wood, suggested a symbolic gesture to show support for people who have challenged Beijing, such as the student protesters of Tiananmen Square in 1989, or the people of Taiwan seeking formal independence from China.

“There is a little lane near the embassy site that doesn’t have a name. We’re wondering if we could call it Tiananmen Road or Taipei Road. It might be just one way of sending a message that governments have to look after all their people.”

Trump Suggests Lack of Testing Is No Longer a Problem. Governors Disagree.