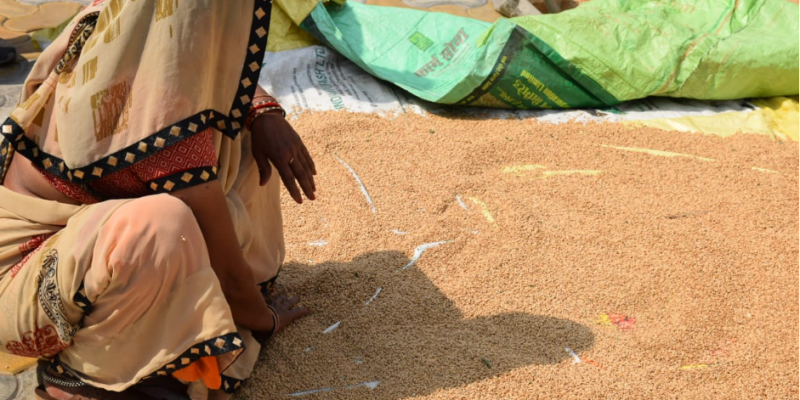 New Delhi: The Union government has asked wheat-producing states and Union Territories, whose procurement closing dates are expiring early, to keep procuring wheat till May 31, the Ministry of Consumer Affairs, Food and Public Distribution said in a statement on May 15, Sunday.

“We have extended procurement operations in Haryana till May 31. Punjab wanted to close early due to negligible arrival of the grain, but we have requested the state government to continue buying till May-end,” an official told PTI.

In the case of other states, the closing dates set earlier would continue.

“The Centre has asked wheat-producing states and UTs with procurement closing dates expiring early to continue procurement till May 31, 2022,” the food ministry said in a statement.

The extended period is expected to benefit farmers, the ministry said.

The ministry has also asked the nodal agency Food Corporation of India (FCI) to continue with wheat procurement under the central pool, it said. The decision comes in the wake of requests by state governments/UTs to continue the procurement process, it added.

The government’s wheat procurement reached 18 million tonnes (mt) till May 14 of the ongoing 2022-23 marketing year, less than 36.7 mt in the year-ago period. This 18 mt likely procurement this time will be the lowest since the 11.1 mt bought in 2007-08, the Indian Express reported.

The wheat procurement target has also been revised to 19.5 mt from the earlier target of 44.4 mt for this year.

There are two reasons for wheat procurement plunging to a 15-year-low this time: first, an increase in global demand for Indian grains due to the Russia invasion of Ukraine has led to a rise in exports, and second, lower production due to heatwaves.

Ukraine is one of the world’s biggest exporters of corn, wheat and sunflower oil, flows of which are largely stalled. India is the second-biggest producer of wheat.

As global wheat prices were trading at record highs, Indian farmers had been realising well above the minimum support price (MSP) at which the government is procuring. However, the Union government on May 13 announced a ban on wheat exports, amid an impending food crisis, drawing criticism from Opposition parties and the global community. Food secretary Sudhanshu Pandey had said that the government’s decision to ban wheat export is expected to cool down the domestic prices in a week or so.

After the ban, global wheat prices on Monday, May 16 jumped to €435 per tonne as the European market opened.

Additionally, temperatures soared in March to the highest ever for the month on record going back to 1901, shriveling India’s wheat crop during a crucial growth period.

K.K. Singh, head of the agromet division at India Meteorological Department, told Bloomberg that wheat is very sensitive to heat. High temperatures in March shortened the important grain filling period, reducing the weight of the crop.

In most wheat-growing areas, except Madhya Pradesh, where the crop is ready to harvest by mid-March, farmers have reported a 15-20% decline in per-acre yields, the newspaper reported.

(With inputs from PTI)