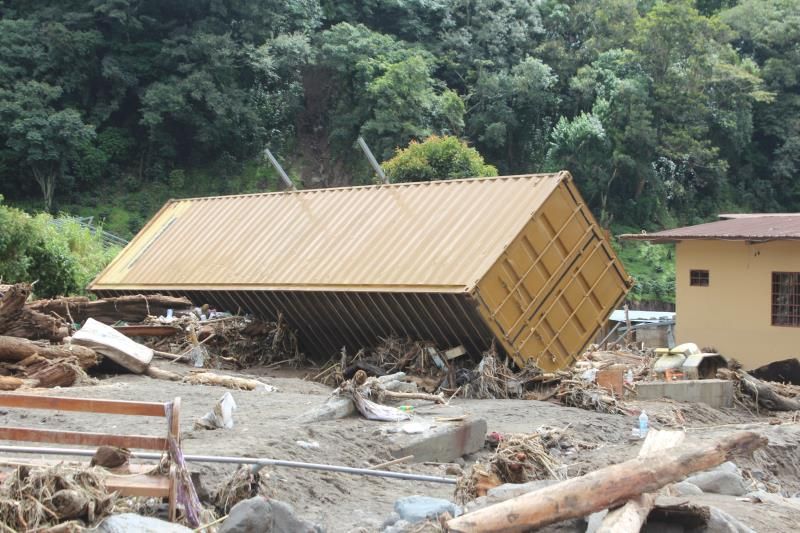 Panama, Nov 13 . .- Central America, with soils saturated with water after the climatic phenomenon Eta, which left at least 130 dead, 119 missing and destroyed in the region, is on alert for the tropical storm Iota, which threatens to carry cyclonic winds and abundant rains to the isthmus starting next Sunday.

This new phenomenon, which can become a major hurricane when it approaches Nicaragua and Honduras as of Sunday, occurs when Central America is still looking for missing persons due to the rains caused by Eta and some towns remain isolated due to the destruction of rural roads.

The United States National Hurricane Center (NHC) indicated that on the planned trajectory, Iota will move through the center of the Caribbean Sea during the next two days until it approaches the coasts of Nicaragua and the northeast Honduras between Sunday afternoon and Monday.

The storm could become a major hurricane on the Saffir-Simpson scale (those with Category 3 and above are considered that way) as it approaches Central America.

Until next Wednesday it is expected to produce rain in northern Colombia, Panama and Costa Rica, Jamaica and southern Haiti.

Central America, with some 50 million inhabitants, is a territory with coasts on the Atlantic and Pacific, volcanoes and mountains on whose slopes poor, urban and rural communities rise, which makes it one of the most vulnerable regions in the world to natural disasters.

Eta reached the isthmus on November 3 as a powerful hurricane that made landfall in a sparsely populated area of ​​northern Nicaragua, where it left great destruction, then degraded to a tropical depression and thus entered Honduras a day later.

The Nicaraguan government reported this Friday that it is monitoring “closely” the new climate phenomenon formed in the Caribbean, which could impact the same area that Eta did, leaving thousands of victims and where the 1,890 destroyed houses have not yet been raised. another 8,030 with partial damage.

Honduras maintains the maximum alert decreed by Eta, which left at least 62 dead, 8 missing, more than 2 million people affected and destruction of infrastructure and crops, according to official data.

Although Eta only reached Nicaragua and Honduras, its influence affected the entire isthmus and the image of destroyed infrastructure and crops and rural communities devastated by floods and landslides is repeated in the countries.

In Guatemala there are 46 deaths, at least 96 missing, more than 100,000 people evacuated and desolation in towns in the north of the country.

The National Institute of Seismology, Volcanology, Meteorology and Hydrology (Insivumeh) reported this Friday that the new climatic phenomenon may have a similar trajectory to Eta, which could favor increased rainfall in the same northern areas of the country affected by this .

In Panama, deaths rose to 19 with the discovery in the last hours of two new bodies, there are twelve missing and productive roads and farms in the north of the country were destroyed, where more than 2,500 people remain in shelters.

The National Civil Protection System (Sinaproc) of Panama declared a prevention alert until November 15 for seven of the 10 provinces of the country and the Guna Yala region, the same areas hit by rains associated with Eta.

In Costa Rica, which registers two deaths and 300 people sheltered by the rains of the past days, the National Emergency Commission (CNE) has begun preparing for the effects that the new phenomenon in the Caribbean will possibly cause.

In El Salvador, one death was registered and more than 2,200 people were taken to shelters due to the Eta rains.

Who spells out Universal Health Coverage