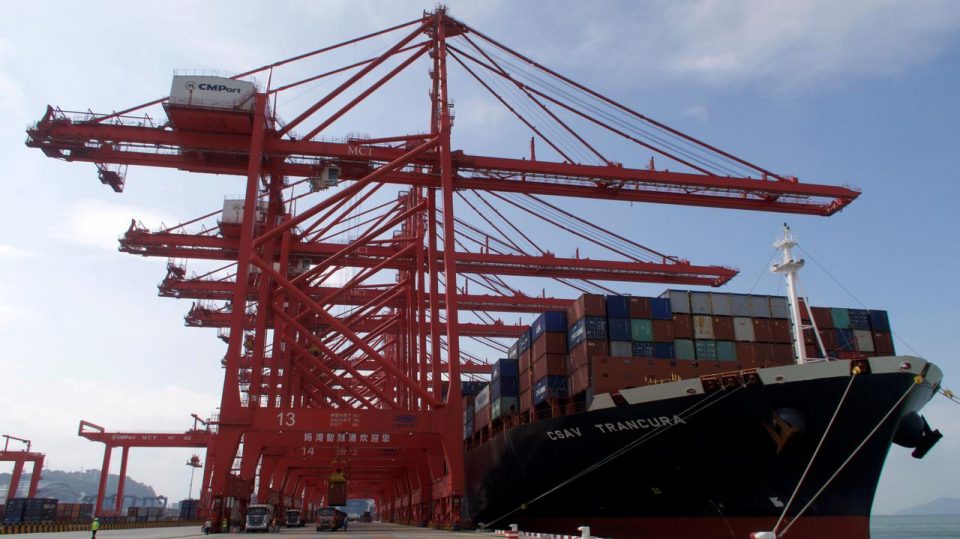 London – Carriers since July have been rapidly reinstating high levels of capacity blanked in the second quarter as demand began to return rapidly, most notably on the trans-Pacific where US imports are setting records. The capacity management strategy that has kept freight rates at record levels is being tested by the rapid recovery in demand on the trans-Pacific and Asia-Europe trades, and carriers are being stretched to the limit: “We have virtually no ships in our fleet that are not at work right now,” Vincent Clerc, chief commercial officer at Maersk, told Supply Chains Reloaded, a webinar put on by Kuehne + Nagel and Maersk, Thursday. “We are managing hand to mouth now to make sure we provide as much speed, capacity, and reactiveness for customers.” That was echoed by Hapag-Lloyd CEO Rolf Habben Jansen, who told reporters at a press briefing earlier Thursday the carrier began reinstating blanked weekly capacity on the trans-Pacific in June. By August, the capacity was “well above” what was deployed in the same month last year, he said.

According to Sea-Intelligence Maritime Analysis, space availability on vessels leaving Asian load ports this month will improve as carriers deploy extra-loaders and reinstate blank sailings, increasing capacity 26% to the US West Coast and 31% to the East Coast compared with October 2019. On the Asia-North Europe trade, capacity will be up almost 14% year over year, and 6.5% higher on the Asia-Mediterranean routes. The continued heavy import demand from the United States and Europe has exacerbated a shortage of containers at load ports in Asia.

According to online logistics platform Container xChange, equipment shortages across Asia and port congestion in various European and US ports has increased over the last few weeks. Importers in Europe and the US are battling to return empty containers to Asia after the prolonged spike in imports that began in late June following the reopening of their economies after weeks of COVID-19 lockdowns: “Many of us are struggling with the availability of equipment because we don’t have all the equipment in the right places, – Habben Jansen said. – Equipment is very tight. We have seen the traditional trade patterns disturbed in the past few months that have affected our ability to get containers back to Asia.” Clerc said Maersk has also been having a hard time repositioning containers to Asia, with congestion at destination ports such as Los Angeles and Long Beach and a shortage of trucking capacity in the US. Imports from Asia through the Los Angeles-Long Beach gateway increased 22% year over year in both August and September, according to PIERS, a sister company of JOC.com within IHS Markit.

Volumes from Asia to Europe have also rebounded since the doldrums of April and May, with shipments ticking up 1.6% year over year in August, the first month of positive growth since October 2019, according to the latest available data from Container Trades Statistics (CTS). This surge in import demand from North America and Europe continues to surprise – and challenge – those managing the container transport supply chain: “Talking to a lot of shippers in March, they were predicting volume would drop by 50 to 60%, especially in April and May, – Otto Schacht, head of sea freight at Kuehne+Nagel, explained during the Supply Chains Reloaded webinar. – But volume came back very quickly, which no one had predicted. When we look into the next few quarters it is difficult to predict anything, and all this uncertainty is having a huge impact on the supply chain. The name of the game now is flexibility.”

Clerc also emphasized the need for flexibility to serve the changing needs of shippers: “The whole conversation with many customers during the second quarter was [about] how to slow down the goods. The whole conversation now is ‘how can you speed up?’ and ‘how can I increase my space allocation? – he said. – We have moved from putting on the handbrake to putting the pedal to the metal, and this need for flexibility and agility will continue so we can cope with the volatile demand.” However, accompanying the rising demand are high rates and a sharp decline in schedule reliability by the carriers. On-time performance for carriers on Asia-North Europe in August declined 11% compared with July, while Asia-US West Coast on-time performance fell 13% in August to 62.2%, according to Sea-Intelligence.

The deteriorating service levels were not appreciated by the logistics director for a major global clothing retailer, who asked not to be identified: “August was the worst month for schedule reliability we have seen in a long time, and you can complain – we certainly have – but nothing happens, and rates continue to rise,” the source told JOC.com. Weekly rates have hit record levels on the trans-Pacific and multi-year highs on Asia-Europe. Average spot rates on the China-US West Coast fell slightly this week to $3,848 per FEU, still up 193% year over year, according to the Shanghai Containerized Freight Index (SCFI).

Pricing from Asia to the US East Coast remained flat at $4,622 per FEU, double the rate during the same week last year. China-North Europe rates were also down slightly to $1,142 per TEU, but still almost double the rate this time last year, while China-Mediterranean spot rates were up 66% year over year at $1,202 per TEU. The weekly rate movements are tracked at the JOC Shipping & Logistics Pricing Hub.