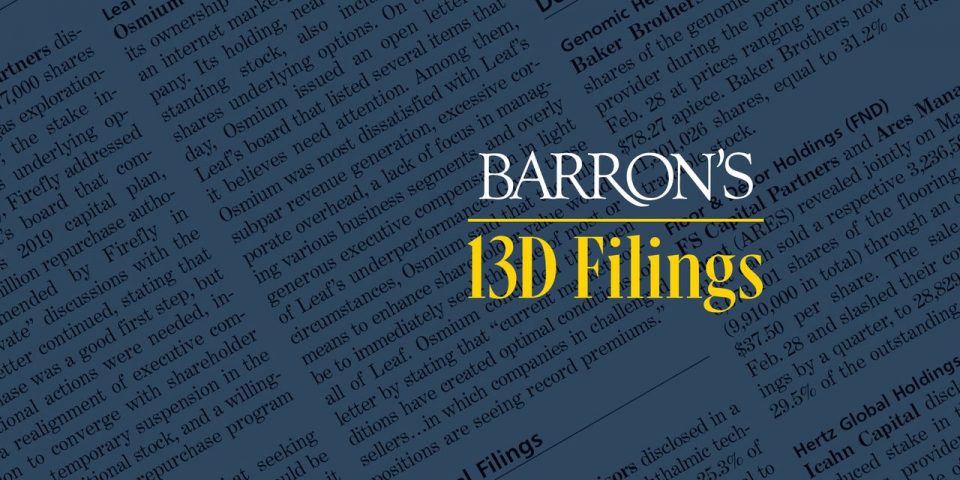 13Ds are filed with the Securities and Exchange Commission within 10 days of an entity’s attaining a greater than 5% position in any class of a company’s securities. Subsequent changes in holdings or intentions must be reported in amended filings. This material has been extracted from filings released by the SEC from Nov. 14 through Nov. 20, 2019. Source: InsiderScore.com

Callon Petroleum (CPE)
Paulson & Co. disclosed on Nov. 18 an interest in the independent oil-and-gas explorer of 10,338,663 shares, less than half of what Paulson reported on Nov. 5 when it revealed a 9.5% stake. Since the prior disclosure, Paulson shed nearly 52% of its position with sales of 11,254,860 shares at prices ranging from $4.29 to $4.57 each on Nov. 14 and 15, leaving it with a 4.5% interest in Callon’s outstanding stock. Paulson previously stated that it would vote its shares against Callon’s proposed $1.2 billion merger with Carrizo Oil & Gas (CRZO) first announced in July.

Now, through a press release on Nov. 18, Paulson revealed that it has withdrawn its opposition and will vote its shares in favor of the acquisition, as “the revised merger terms provide substantial benefit to Callon shareholders.”

The stock-and-cash deal has been re-worked to reduce the exchange ratio of Callon to Carrizo, reduce the premium paid to Carrizo shareholders, and “eliminated the golden parachute entitlement to Callon management” among other changes. Paulson concluded that it still “believes that a pure Permian-focused producer would be a more attractive alternative…different shareholders might have different viewpoints on this matter. As such, although Paulson no longer opposes the transaction, it has reduced its investment position in Callon.”

Red Lion Hotels (RLH)
Coliseum Capital Management lifted its position in the lodging company to 4,200,871 shares. The higher amount resulted from the block trade purchase of 537,000 shares on Nov. 14 at $2.63 each. This was Coliseum’s first transaction in Red Lion Hotels’ stock in nearly a year, when Coliseum reported an approximate 3.7-million stake near the end of 2018, a then-14.9% interest in Red Lion. It now holds 16.7% of the outstanding stock.

Fang Holdings Limited (SFUN)
General Atlantic Partners disclosed a higher interest in the China-based online real estate services provider of 15.7% of the outstanding American depositary receipts. General Atlantic bought 701,300 ADRs, equivalent to an equal number of ordinary shares, during the period of Oct. 10 through Nov. 15 at per share prices of $1.97 to $1.99. General Atlantic now owns 10,186,442 ordinary A shares after the acquisitions.

Genco Shipping & Trading (GNK)
Strategic Value Partners reported holding 8,165,428 shares of the transoceanic dry-cargo transporter, equal to 19.6% of the tradable stock. On Nov. 14, Strategic Value and its affiliates sold 2,000,000 shares at $10 apiece. No reason was given for the divestment.
Floor & Décor Holdings (FND)
Ares Capital Management reported a reduced stake in the flooring retailer of 18,224,262 shares, or 18% of the tradable stock. A wholly owned affiliate of Ares sold 7,105,728 shares through a block trade sale on Nov. 14 at a price of $43.80 per share.

No reason was given for the sale, though the same affiliate cited that it would not sell any additional shares for the next 30 days after the day of the block trade.

Pure Cycle (PCYO)
PAR Capital Management revealed a lower position in the water and wastewater-services provider of 2,532,970 shares. That amount accounts for the privately negotiated sale of 500,000 shares to Schloss Bros. on Nov. 18 at a price of $10.75 per share.

At the height of its ownership, Icahn amassed 32.7 million shares, or a 13.8% interest in the energy firm by the end of 2015. That stake did not change until Icahn cut 9,000,000 shares from its position last June and has continued to steadily sell ever since then.

Deciphera Pharmaceuticals
(DCPH)
New Leaf Ventures cut its position in the clinical-stage biopharmaceutical by nearly a third, to 4.7%. The reduced stake resulted from the recent sale of 1,120,941 shares during the span of Sept. 16 through Nov. 8 at prices ranging from $36.53 to $47.92 each. New Leaf currently holds 2,421,655 shares following the divestment.

What’s Happening: Engaged Capital has talked with the company about opportunities to maximize shareholder value.

$150: per share value that Medifast could receive in a sale

Behind the Scenes: Engaged had been a Medifast 13D filer from May 2014 through November 2017. At that time, they made significant changes to the board and management and exited with a 124% return, versus 36% for the S&P 500. In the two years since, the stock has traded in a volatile range of $65 to $249. The stock recently dropped as low as $74.36 due to operational missteps that often accompany quick growth. Medifast is a noncyclical, growing business that is asset-light with good margins and a strong balance sheet. Despite this, the company is trading at a low Ebitda ratio relative to similar businesses. There are operational improvements that could be made, such as expanding internationally. But due to the negative impression of multilevel marketing companies and the effect of momentum algorithms on smaller-cap companies, Medifast is unlikely to get a fair valuation in the public markets.

Engaged’s 13D language sends a subtle but strong message that it thinks the company should go private. Medifast has since adopted a poison pill to prevent any shareholder from getting control without paying a fair premium.

The 13D Activist Fund, a mutual fund run by an affiliate of the author and not connected to Barron’s, has a long position in Medifast. In addition, the author publishes and sells 13D research reports, whose buyers may include representatives of participants in, and targets of, shareholder activism.