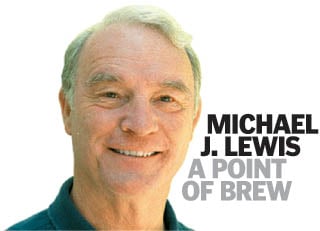 Beer wholesalers are the essential middlemen between beer manufacturers and retail outlets, and virtually every bottle and can of beer arrives on store shelves from wholesalers’ trucks. This gives wholesalers a sharp focus on how the beer market is doing.

Two things give wholesalers a big incentive to be well-tuned to the retail market. First, wholesalers actually buy from the breweries those beers they sell on to retail stores so they tend to seek out beers that will sell well at retail; otherwise, they may be stuck with owning a slow-moving product. Second, beer flavor changes over time, or ages, and brewers have not been as smart as winemakers by claiming that aging is a good thing.

Brewers promote “fresh flavor” and put a time limit, such as 100 days, before a beer should be withdrawn from the market. So, wholesaler’s stock must move quickly; they usually consider 30 days in the warehouse as “beer at risk.”

The National Beer Wholesalers Association publishes a monthly report on how the beer market is doing and what the short-term future might be. The Beer Purchasers Index (BPI) scale runs from 0 to 100 on which 50 indicates a steady market; scores above 50 indicate growing demand and, of course, scores below 50 indicate shrinking demand. Beer sales are broken down by beer category.

Generally, the present data are below 50 for beer sales and worse for not-beer products such as hard seltzers that originally enjoyed remarkable growth. The data plainly show an influence of harder economic times in which premium beers are among the less essential items. Thus, the most expensive beers in the market, that is craft beers, have fallen the farthest on the BPI, from a healthy 58 in August 2021 to an anemic 28 in August 2022. Premium beers of the major breweries have also fallen but not nearly as much say from 44 to 37. Beers in the below premium category, often called “price” beers, have improved somewhat, from 37 to 42, presumably because some consumers have switched from premium brands to cheaper beers.

As you might guess from these data, the amount of beer in the wholesaler’s “at risk” category has moved from satisfactory to unsatisfactory. Oops!

There is one bright spot amid the gloom: imported beer is still in expansion territorym having dropped from 66 in 2021 to a still-heathy 63 now. About 80% of imports come from Mexico, with Corona and Modelo beers chief among them. Both these beers are made and owned by Anheuser-Busch Inbev everywhere except in the USA. Constellation brands purchased the rights to make these beers in Mexico and sell them exclusively in the USA in 2013.

Corona is packaged in clear (or flint) glass bottles that offer no protection from the ravages of sunlight, which may makes the pervasive promotion of Corona as a beach beer a bit odd. Sunlight can cause beer to smell like a skunk. I always thought the lime in the neck of the bottle was intended to disguise that unwelcome aroma. These days there is technology to prevent skunky aroma but the lime is still a part of the presentation.

I recently came across a sort of nutrition bar called SOBAR that has a particular application: It is intended to slow down the effects of alcohol consumption by causing the stomach to empty more slowly. I suppose this gives the body time to detoxify the alcohol and perhaps allows a drinker to enjoy the relaxing effects of alcohol without getting too happy. Alternatively, it might delay the time to drunkenness. I suppose the name of the bar is a play on the word sober.

Naturally, I was intrigued by this and read some of the comments about the product. The first was some idiot who praised the bar and said he now felt free to have four beers instead of two.

Sobar has been proved effective by research published in a peer-reviewed journal called The Journal of Medicinal Food. I looked at it. Turns out that though the bar claims magical ingredients, including a propriety mix of milk protein and insoluble oat fiber; it is somewhat less effective in lowering blood alcohol than eating a small meal before drinking alcohol.

The bar is only more effective than a meal before drinking when compared on the caloric content of the bar (210 calories) or the meal (675 calories). So, the bar is 50% better at slowing alcohol absorption into the blood stream per calorie. Easily misunderstood idea.

Wisely, the Sobar site has the following warning that I hope Sobar users will read, understand and appreciate:

What the data do show most clearly is something drinkers have known since earliest times: never drink on an empty stomach.

Rumors the possible Amazon warehouse in Enka on hold