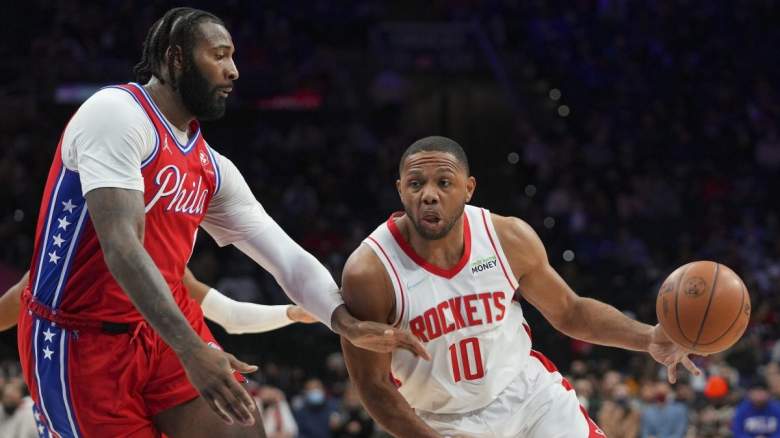 Eric Gordon #10 of the Houston Rockets.

The Philadelphia 76ers faced no shortage of trade speculation in a summer that saw them pull the trigger on only one trade: a draft-night swap of Danny Green for De’Anthony Melton.

Be it Kevin Durant, Gordon Hayward, Alec Burks, or Buddy Hield, Philadelphia was certainly window-shopping around the league for roster improvements. That has meant that current Sixers like Tobias Harris, Tyrese Maxey, and Matisse Thybulle have also seen their names bandied around all summer as potential trade pieces.

One trade that Philadelphia got close to making was for Houston Rockets wing Eric Gordon. Gordon hardly fits the profile of a player the Rockets are looking for: he’s a 33-year-old bencher in a sea of teens and early 20-somethings.

While Philadelphia never did make a trade for Gordon, it hasn’t stopped the Rocket from seeking answers from the front office. According to Kelly Iko of The Athletic, Gordon is seeking a magical c-word from Houston (and no, not “crunch time minutes).

“As bad as Houston was last season, the team played better with Gordon on the floor. And given that Gordon has no more guaranteed money after this season, he wants clarity on his situation — whether it’s a long-term extension to remain in Houston or a trade to a contender,” Iko wrote on September 23.

Given his production last season, Gordon should have found a litany of suitors lining up for his services.

Bleacher Report’s Zach Buckley broke down where trade talks have stalled for Gordon on September 27. And unsurprisingly, Houston knows it has an asset teams want and is simply waiting for the best offer.

“Then again, the fact that he looms as such an obvious trade candidate might have convinced everyone to send low-ball offers, in which case Houston might be better off either waiting for those offers to improve or seriously considering keeping him around for the many lessons he could teach his teammates.”

Philadelphia looks like it has a well-rounded roster heading into training camp. But even though the season’s eve is right around the corner, could the Sixers still pull off a move for Gordon?

Could the Sixers Still Have Interest in Gordon?

Philadelphia faces a serious roster question: who will make the final cut? As it stands, Philadelphia has 17 players under contract. But per league rules, teams can only carry 15 contracted players into training camp.

That likely means two of the down-roster names will either be cut or traded before the regular season. And Sixers GM Daryl Morey isn’t one to let an asset walk out of the door for nothing. But in order to trade one of Trevelin Queen, Charles Bassey, Paul Reed, Jaden Spring, or Isaiah Joe, he’ll likely need to sweeten the deal with another player.

Could the Rockets be interested in a three-for-one consolidation trade built around Gordon? Perhaps, but the best that Philadelphia could offer is likely Matisse Thybulle. It’s unclear whether Houston is interested in Thybulle after the Sixers reportedly had to get a third team involved in the proposed Gordon trade over the summer.