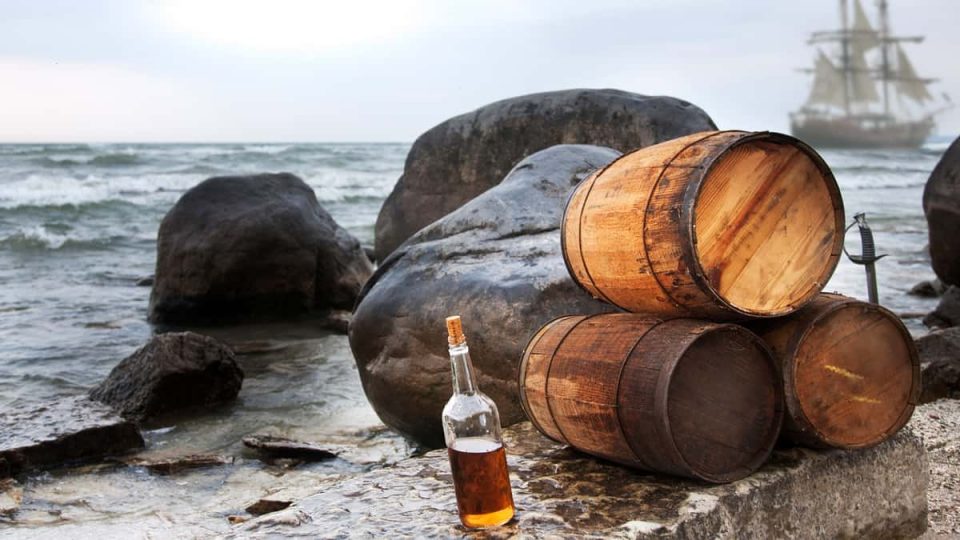 It seems like an alcohol aficionado’s fairy tale but it’s true. Once upon a time, giant tanker ships plied the high seas full of wine, beer and spirits, not crude oil, gasoline and diesel. Massive volumes of liquor were transported in one fell swoop, sloshing around in enormous holding tanks as they traversed the oceans, to be pumped out in their final destinations, then bottled and imbibed.

Alcohol (for consumption, not industrial use) is now largely shipped via container, yet it wasn’t always this way. Throughout the 1900s and in select cases into the 2000s, breweries, vineyards and distillers turned to oceangoing tankers for transport.

Ireland’s Guinness ran a fleet of coastal beer carriers between 1913 and 1993, using dedicated vessels to bring beer from its brewery in Dublin to the ports of the British Isles. The crew who worked aboard the vessels were known as the “Cross Channel Gangs.” Beer was carried aboard the ships in wooden casks through 1953; after that, it was loaded in special aluminum or stainless-steel tanks that each carried 4,032 pints.

Guinness then began to think bigger. It first looked at the transport of beer in much larger parcels in 1971, conducting an experiment with specially fitted tanks aboard the 1952-built Lady Grania (all vessels in the fleet were named after members of the Guinness family).

That test was a success, and Guinness converted the 1962-built Lady Patricia into a beer tanker at the Bristol shipyard in 1973. That, in turn, led to the construction of the first-ever purpose-designed beer tanker, the Miranda Guinness, in 1977.

The Miranda Guinness sailed twice-weekly trips between Dublin and Liverpool. It had 15 stainless steel tanks capable of carrying a total of almost 2 million pints of Guinness beer per voyage.

The Guinness fleet was the focus of an article by Edward Bourke in the Journal of Research on Irish Maritime History that includes an anecdote not mentioned in the official Guinness history.

According to that article, “The Lady Patricia was the first ship adapted with beer tanks to carry beer in bulk. These tanks were washed and steam-sterilized en route back to Dublin after the beer had been discharged.

“On one occasion, as the Patricia entered a lock on the Manchester Ship Canal, the captain looked over the side and to his horror the lock was filling with frothy tank washings. Someone had started to discharge the rinsings of beer before they had reached the open sea.

“The authorities were very strict about discharges in the canal, which was suffering from serious pollution of all types and was filthy. He had to think quickly and ordered ‘full ahead on engines, full astern, stop engines.’ The propellers churned up the filthy mud from the bottom of the lock. The stinking ordure that was disturbed concealed the beer foam and nobody was the wiser.”

The concept of shipping wine in tanker holds was much more prevalent in the mid-20th century than the bulk transport of beer.

The first-ever dedicated wine tanker was the Bacchus, a converted cargo ship launched in France in 1935 with a capacity of 337,000 gallons of wine. After being sunk in World War II, a second cargo ship was converted to a wine tanker with the same name.

But the largest and most famous wine tanker to sail was America’s Angelo Petri. The vessel was another conversion job, built at San Francisco’s Bethlehem yard using a section of an older tanker originally built in 1943.

The capacity of the Bacchus was dwarfed by the Angelo Petri, which could carry 2.4 million gallons of wine. To put that in perspective, this is the equivalent of 12.1 million bottles of wine (based on 750 milliliters per bottle) per voyage.

The ship, owned by United Vintners, made its maiden voyage in 1957. It was designed to reduce the overland cost of wine shipments to the East Coast, and conducted around seven round-trip voyages per year until the mid-1970s. It sailed from Stockton, California, via the Panama Canal to Newark, New Jersey — where there were special wine barges and a truck fleet to serve the inbound loads — then made a call in Houston on the return trip, with a portion of the wine cargo unloaded there and barged up the Mississippi River to Chicago. Of the 2.4 million gallons of wine per voyage, around 1.4 million was discharged in Newark and 1 million in Houston.

Unlike the Bacchus, which had wine tanks with special varnish, copper pipes and bronze valves, the tanks, pipes and valves aboard the Angelo Petri were all stainless steel.

The tanker loaded wine in 26 stainless-steel tanks (each tank ranged in size from 31,000 to 211,000 gallons) and had an additional 1.3 million gallons of capacity in completely segregated tanks for other cargoes, such as fuel. The owner’s quarters of the ship were designed to highlight wine colors in each room: from sherry to burgundy to sauterne.

Other smaller wine tankers have been put in service over the past half-century in the Mediterranean market. A number of 1970s-built vessels with an International Maritime Organization designation of “wine tanker” still appear to be in operation in Southern Italy.

One shipping industry expert speaking to FreightWaves recalled a story he was told involving a Mediterranean wine tanker. The original teller of the tale has since passed away so its veracity cannot be confirmed.

“One old guy who used to be involved in the trade told me they used to recoat the tank after every cargo of wine from Greece or Italy. On one occasion, they didn’t bother as the ship was going to drydock.” The next time the ship transported wine, “the importer complained that the particular cargo was of poor quality, as it didn’t have any ‘body.’ The guy told me that the only reason the earlier cargoes had body was that they dissolved the coating each time.”

In the case of spirits, the core raw alcohol cargo is known in the shipping business as “potable ethyl alcohol.” This cargo has been shipped in full tanker loads aboard small product tankers and in the segmented tanks of chemical parcel tankers.

One retired executive of a chemical tanker company, who spent the earlier part of his career in the chartering division of a large parcel tanker company, recalled fixtures of potable ethyl alcohol in the 1980s and 1990s but not in more recent decades. He speculated that the drop-off could be the result of regulations that prevent certain edible (i.e. drinkable) cargoes from being loaded if other types of cargoes were carried in the same tanks during the previous three loadings. In other words, carrying potable ethyl alcohol would limit what other cargoes a parcel tanker could carry, and therefore decrease the ship’s utilization.

The retired tanker executive recalled one incident he had been told about that occurred before the turn of the century, a story he believed to be true, in which a parcel tanker was carrying a cargo of potable ethyl alcohol in one of its tanks “and there was a minor spill. It came oozing out of the tank onto the deck but the scuppers were closed so it didn’t go overboard. And just at this time, it was in a U.S. port and the U.S. Coast Guard inspector was aboard. The chief mate of the ship told the inspector, ‘Don’t worry, it isn’t bad stuff,’ and the mate took a cup and drank it. I believe he was fired for that.”

The complication of carrying raw alcohol in tanks used for other products is negated if the ship is employed solely for the transport of alcohol. That concept was used for over three decades by Caribbean rum distiller Bacardi.

The operation initially used the 3,700 deadweight ton (DWT) product tanker Proof Gallant, built in 1980 and owned by Norway’s Jo Tankers, to transport rum in the Atlantic Basin. That ship was replaced by a larger tanker, the 5,100 DWT Proof Spirit, renamed Jo Spirit, in 1998.

The Jo Spirit was referred to as the “rum tanker” in the press whenever it was involved in various incidents through the years.

In July 2005, the Jo Spirit collided with a bulk carrier in the St. Lawrence Seaway. According to the accident report from the Transportation Safety Bureau of Canada, it was carrying a cargo of “rum in bulk.” In October 2015, the Jo Spirit lost power and ran aground in the St. Lawrence Seaway, eliciting the online joke: “rum on the rocks.” According to press reports, the vessel had been en route from Hamilton, Ontario, to Cuxhaven, Germany, with a cargo of rum.

The vessel no longer appears to be in this trade. It is now operated by Turkish interests and was renamed Gunece last year; it was damaged after being struck by a ONE container ship in Perama, Greece, this September.

FreightWaves asked Bacardi for comment on how the company is currently handling its bulk rum-transport operations, but the spokesperson replied that “we won’t be able to help out on this occasion.”

A ship broker speaking to FreightWaves on condition of anonymity said that chemical tankers were used until just a few years ago for the transport of both wine and potable ethyl alcohol from Europe to West Africa.

However, the general trend for alcohol transport favors shipments via container — mirroring the evolution for other products that used to be shipped in bulk, such as bananas, which were once largely carried aboard special bulk “reefer” vessels but are now mostly shipped in special refrigerated containers.

As Part 2 of the FreightWaves FaK coverage of “Bulk booze by sea” will examine in depth, beer is now moving across the high seas in bottles, cans and kegs in regular containers; wine is mostly shipped in bottles and so-called flexitanks (which are essentially large disposable bladders placed within 20-foot containers); and spirits are mostly transported in bottles and stainless steel ISO tank containers. The days of giant tankers full of booze are history. More FreightWaves/American Shipper articles by Greg Miller

DACHSER announces changes in executive board