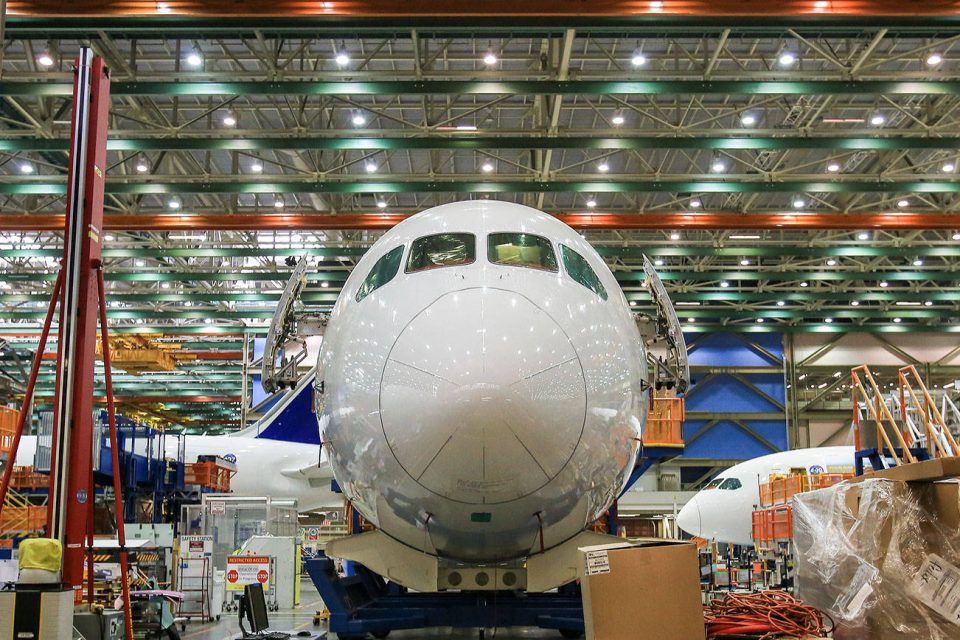 EVERETT — A large portion of the Boeing Co.’s assembly plant at Paine Field will be “lined off for quite a while” after two major lines close over the next two years, the company said Wednesday.

During a third-quarter earnings conference call, Boeing CEO David Calhoun said there are no plans to fill the space that will be created by the planned closing of the 787 and 747 production lines in Everett.

“We’ll sort of line it off for quite a while,” Calhoun said in response to an analyst’s question about the factory. “We’re not just going to try to fill empty space — that would not be in our best interest.”

Calhoun also brushed aside speculation that assembly of the Renton-built 737 Max could be moved to Everett.

“I don’t want to move lines from one place to another just because it’s available,” Calhoun said.

Production of Boeing’s 787 series will be consolidated in South Carolina by next summer. And the half-century-old 747 program is due to end the following year when the last of a dozen remaining orders roll off the line.

Together, the two assembly lines occupy roughly a quarter to a third of the production space at the massive assembly plant.

Boeing also said Wednesday that it will lay off another 7,000 employees throughout the company by the end of 2021. So the Everett site, already facing layoffs related to the 787, could see employee ranks reduced even further.

Boeing started the year with 160,000 employees worldwide. Over the next year, the headcount will dwindle to 130,000 through a combination of retirement, attrition and layoffs, Boeing said in an email Wednesday after reporting earnings. That’s about a 19% cut overall. Earlier this year the company said a 10% cut was planned.

At the beginning of the year, the jet maker employed about 35,000 employees in three shifts at the Paine Field campus. More than 1,000 of those workers produce the 787. They could see their jobs eliminated when production of the twin-aisle passenger jet moves to the 787 assembly plant in North Charleston, South Carolina.

In the meantime, the Everett campus will continue to produce the 767 freighter, the KC-46 Pegasus tanker and the 747 until that program ends in 2022.

“We’re aligning to this new reality by closely managing our liquidity and transforming our enterprise to be sharper, more resilient and more sustainable for the long term,” Calhoun said in an earlier news release.

Once a prodigious cash generator, Boeing is now carefully monitoring liquidity and soaring debt while navigating the deep slump in air travel and working with regulators to lift the Max’s flying ban. Boeing has burned through about $22 billion in free cash since March 2019, when regulators grounded the company’s best-selling jet after two fatal accidents.

Boeing consumed about $5 billion in free cash during the third quarter, in line with analyst estimates and about $620 million less than a quarter earlier, when the pandemic forced the company to temporarily shut down much of its manufacturing. Boeing didn’t announce additional production cuts for its 787 and 737 Max, defying analyst expectations, and also got a $459 million income tax boost.

“While losing money and burning through over $5 billion in three months is hardly good news, at least it wasn’t worse than this,” Robert Stallard, an analyst at Vertical Research Partners, said in a report.

Boeing reported an adjusted loss of of $1.39 a share, better than the average shortfall of $2.08 expected by analysts. Sales dropped 29% to $14.1 billion. Wall Street had predicted $13.8 billion.

Analysts are already looking ahead to 2021 and Boeing’s plans to clear storage lots of around $16 billion worth of Max planes built during the grounding. Rising coronavirus cases are heaping pressure on airlines, which have leverage to scrap or renegotiate terms for Max jets with deliveries delayed more than a year.

Boeing’s affirmation of its plan to build 31 single-aisle aircraft each month by early 2022 “suggests either (1) confidence in getting customers to accept most of the 450 Maxes in inventory for delivery in 2021 or (2) willingness to take longer to pare the Max inventory,” said Cai von Rumohr, an analyst at Cowen & Co.

Airbus, which reports earnings Thursday, has also been buffeted by the pandemic. But the European plane maker has seen fewer cancellations for its narrow-body jets than Boeing, and has even signaled suppliers to be prepared to raise production rates late next year if the market rebounds.

Questions are building as to how Boeing will counter a product lineup that includes Airbus A321neo jetliners — particularly longer-range versions of the narrow-body jet that are capable of replacing wide-body aircraft on trans-Atlantic routes.

Calhoun said the company is still in the airplane development business but did not offer specifics around a new airplane design. “We’re going to assess this market, based on everything that’s happened in the last year and probably the next year,” Calhoun said.

Janice Podsada of The Daily Herald and Julie Johnsson of Bloomberg News contributed.

Quixplained: How a vaccine travels from factory to syringe

Pan Ocean: Trade Volume Recovery to Be Visible from 2021

Australia is out of recession. Now it needs to avoid a trade war with China |