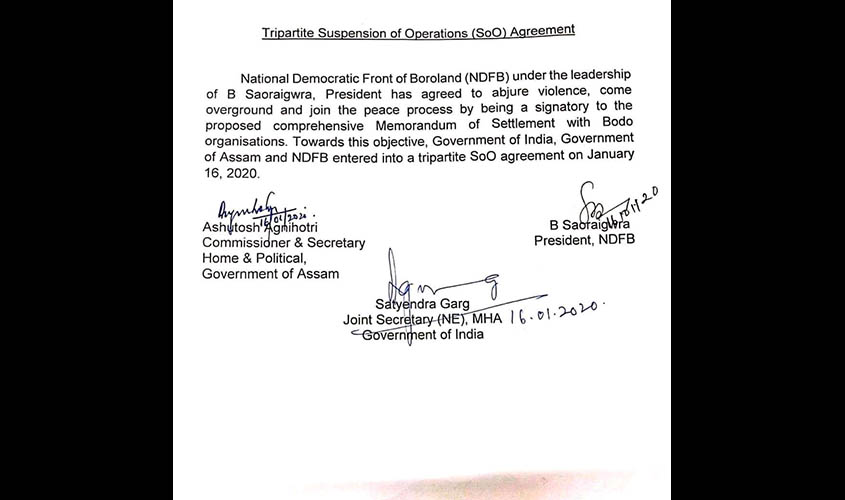 New Delhi: The decades-long Bodo insurgency in the northeast has, for all practical purposes, come to an end with the National Democratic Front of Boroland-Saoraigwra (NDFB-S) joining the peace process with the Central government on Thursday. Under the leadership of its president B. Saoraigwra, the NDFB-S signed a tripartite Suspension of Operation agreement with the Central government in New Delhi. The NDFB-S was the only Bodo insurgent group that had not joined the peace process.

The agreement reads: “The National Democratic Front of Boroland (NDFB) under the leadership of B. Saoaraigwra has agreed to abjure violence, come over ground and join the peace process by being a signatory to the proposed comprehensive Memorandum of Settlement with Bodo organisation.”

Biswajit Daimary, Rajya Sabha MP from Assam and a member of the Bodoland People’s Front (BPF), told The Sunday Guardian: “Bodo people want a gun free society. So, we have been trying to bring all underground organisations into the mainstream. Except for the NDFB-S, all factions of the NDFB have already been in the process of peace talks. Earlier, the Centre had refused to talk to the Saoraigwra faction. After repeated requests to the Centre made by the BPF and our chief Hagrama Mahilary, we have been able to make the Centre talk to the NDFB-S.”

Bodos, the largest plains tribe of Assam, had started an armed struggle for a separate state in the mid-1980s. The NDFB was floated in 1986 by Ranjan Daimary with the dream of creating a sovereign homeland for the Bodos. Initially, the name of the organisation was Bodo Security Force (BdSF). The name of the organisation was changed to NDFB in 1994.

It is to be mentioned here that the NDFB-S is the third faction of the NDFB to initiate peace talks with the Centre. In 2005, the NDFB-Progressive faction had signed a ceasefire agreement with the Centre.

The Ranjan Daimary faction of the NDFB, too, started peace talks after its leader Ranjan Daimary was arrested in Bangladesh in 2010. Biswajit Daimary told The Sunday Guardian that the talks will cover issues such as language, culture and economy of the Bodo people. On the issue of a separate state, which has been the core demand of the Bodo insurgency, he said: “In the discussions, they (insurgent groups) will tell the Central government the reason behind their demand for a separate state. If there is some way to solve their problems without a separate state, they will definitely agree.”

According to sources, a group of nearly 50 members of the NDFB-S has reached Assam from Myanmar. However, dreaded insurgent G. Bidai, army chief of NDFB-S, is still to be a part of the peace process. The sources said that Bidai, too, may join the peace process as soon as talks gain momentum.  Promod Boro, leader of the All Bodo Students’ Union, told The Sunday Guardian: “We welcome this faction of NDFB and thank the Centre and the government of Assam for making this happen. During the armed conflict, we lost so many youths in the last 30 years of insurgency. We appeal to the Centre to expedite the talks and resolve this issue as soon as possible. India is a democratic country. Hence, we can approach the government regarding any issue through democratic means.”

THE Alliance to ship more from Southeast Asia to West Coast

Global food crisis: What to know about the Ukraine grain deal

State pulls plug on 170 deals as losing contractors fight back : The Standard