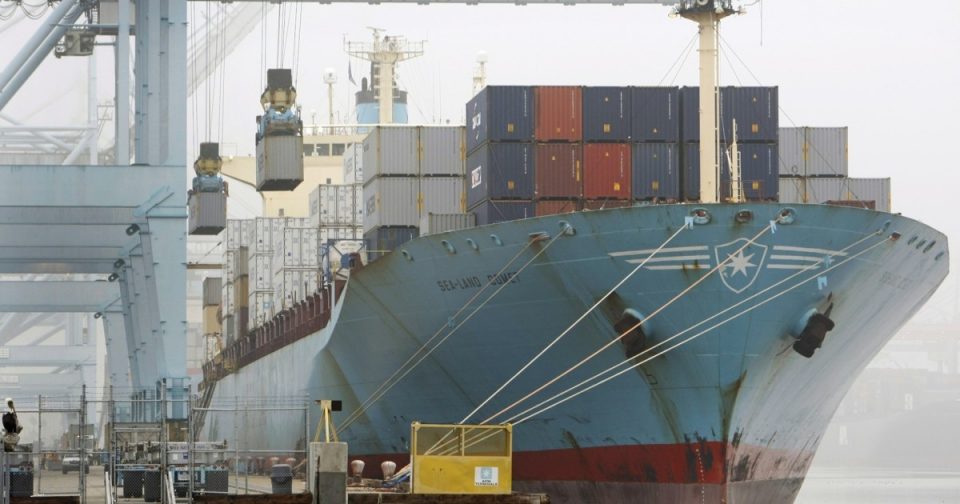 A flotilla of almost a dozen cargo vessels sits anchored just south of Los Angeles this weekend, waiting for berth space. Around the twin ports of L.A. and Long Beach, shipping containers are already stacked five and six high — the maximum the fire department will allow.

“Anywhere you go, there are just containers everywhere,” said Weston LaBar, CEO of the Harbor Trucking Association, an industry group in Long Beach representing carriers who haul the steel boxes to and from the ports. “It’s maddening.”

The perfect storm is swamping the busiest gateway to the U.S. economy heading into the holiday season: Labor and equipment shortages are colliding with the still-healthy purchasing power of American consumers — all complicated by a worsening pandemic that’s making workers and employers extra-tentative. Truckers are struggling to keep up with the wave of record imports.

“Try to pour 10 gallons of water into a five-gallon bucket,” LaBar said, “and you’re going to have a hard time.”

Southern California’s ecosystem of shipping liners, terminal operators, longshoremen and intermodal trucking, like other port communities around the country, is used to weathering seasonal peaks and valleys. But this extended surge is exposing long-neglected inefficiencies, lengthening delivery delays and saddling many links in the supply chain with extra costs.

The finger-pointing has intensified, and federal regulators have started investigating the source of problems around major port areas like Los Angeles and New York. At issue on the West Coast is a shortage of empty containers, which are mostly owned or leased by the liners and are needed to move U.S. exports. Federal Maritime Commission Chairman Michael Khouri said Friday the probe will include a review of any “potentially questionable practices.”

Time is a tariff

On the water, the cost of gridlock adds up quickly: A 2012 paper published by the National Bureau of Economic Research estimated that each day a product stays in transit tacks on the equivalent of an ad valorem tariff of 0.6% to 2.3%.

Sanne Manders, chief operating officer of San Francisco-based freight forwarder Flexport Inc., said that even with nearly all ocean-freight capacity deployed and with equipment like containers and truck chassis in balance, COVID-19’s second big crest may tighten even further the available resources needed to move high volumes of merchandise.

“We expect many of the supply-chain congestion issues we’ve seen throughout the pandemic to continue through Chinese New Year” in February, Manders said.

Sharp, unpredictable swings in economy activity like Los Angeles is experiencing illustrate how the health crisis is grinding the gears of the global trading system. The pileups show the vulnerabilities of distribution systems that aren’t designed for sustained stress, but they’re hardly limited to the U.S.

From southern England to the Panama Canal, finished products, parts and commodities are sitting on ships parked for days waiting for bottlenecks to clear. Here are some other places where trade is slow to reach its destination, and one that’s benefiting from recent upgrades:

An index of containerized freight in Asia surged this month to the highest in more than six years.

PSA Singapore Corp., which handles about one-fifth of the world’s trans-shipped containers, is experiencing a surge of vessel calls and increases in container volumes in recent months, a spokesperson said. The port operator in the heart of South Asia’s shipping lanes is ramping up capacity and working closely with shipping-liner customers to alleviate the current situation, according to the spokesperson.

In the U.K., importers also have to worry about the Jan. 1 break from Britain’s trading relationship with the European Union, even as the two sides try to reach a deal. Coupled with virus-related inventory building, Brexit is causing significant delays at ports including Felixstowe and London Gateway.

Seaborne freight rates to the U.K. have more than doubled this year, according to S&P Global Platts. Felixstowe earlier this month said it’s “still experiencing a spike in container volumes.” Hapag-Lloyd AG, a German shipping line, said last week that “we do not see much improvement in the situation at London Gateway until end-December 2020.”

U.K. importers are seeking to “front-load ahead of this deadline at the start of January,” said George Griffiths of the global container freight-pricing team at S&P Global Platts. Delays at some U.K. ports have caused carriers to impose a congestion surcharge on inbound and outbound containers, driven by demand for home-office equipment and other consumer products as U.K. and Europe endure pre-Christmas lockdowns, he said.

Increased traffic and added COVID-19 safety procedures have led to a congestion at the Panama Canal, a crucial waterway for vessels carrying liquefied natural gas and liquefied petroleum gas from the U.S. Gulf Coast to Asia. Demand for energy increased ahead of the winter heating season and expectations of colder-than-normal winter in Asia.

Vessels without booked slots have had to wait for days to pass through, forcing some shipping companies to choose alternative routes. The canal increased daily transits from 30 to 36 since mid-October to accommodate higher traffic demand. That has made the queue of vessels looking to transit 37% shorter, with waiting time for ships without reservations at between three to six days on average over the last couple of weeks, the canal’s transit operations team said in an emailed response to questions.

Not everywhere is feeling so congested. On South Africa’s east coast sits the Port of Durban, the biggest hub by freight volume in sub-Saharan Africa. It’s functioning well under current circumstances largely due to upgrades started in November 2019 by a team that sought to relieve congestion in the area, says General Manager Moshe Motlohi.

At the height of traffic snarls last year, lines of trucks snaked back more than six miles waiting to be serviced. The port is now able to handle 3,185 trucks every 24 hours, almost double the volume over the same period last year. Container volumes from April to the end of October were down 15% from a year ago, even amid a surge in exports of a healthy lockdown food — citrus fruits.

From buzzing bees to solar panels: Inside Bentley’s green shift