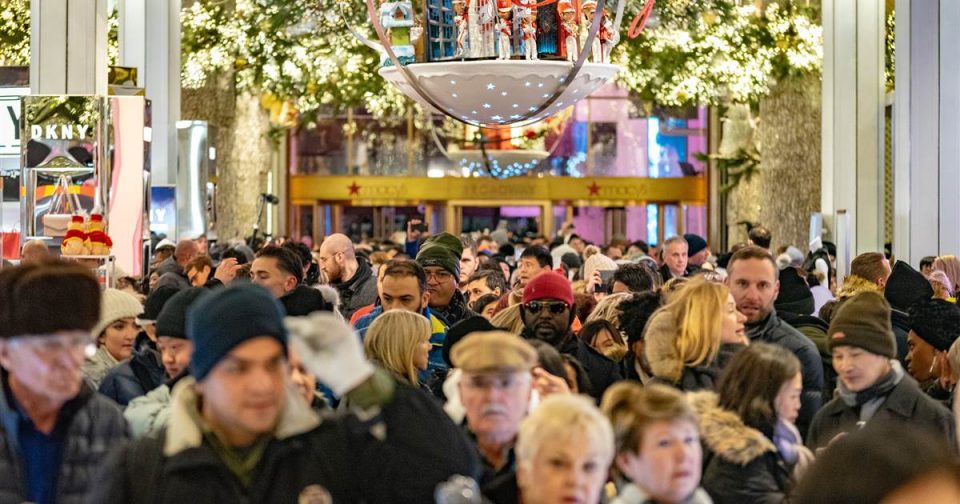 Mixed economic indicators aren’t going to dampen shopper enthusiasm this year, though the holiday season is likely to be less merry for beleaguered department stores, and the threat of new tariffs on Chinese-made clothes, electronics and other consumer goods next month could leave stores with a nasty hangover in 2020.

A survey conducted on behalf of the National Retail Federation found that more than 165 million people plan to shop during Thanksgiving holiday weekend. The NRF predicts that Americans will spend a total of around $730 billion over the course of the holiday season.

The late date of Thanksgiving this year compresses the holiday shopping season. According to new data from Adobe Analytics, more than four in 10 retailers said they were worried about this year’s shorter duration, and more than three-quarters said they were increasing their marketing communications.

People are adjusting by shopping earlier, and retailers in a pitched competition for market share are promoting sales that launch on Thanksgiving Day, if not earlier.

An increase in online and mobile purchasing have helped stretch the boundaries of the traditional concept of Black Friday and contributed to more spending, according to NRF president and CEO Matthew Shay.

The Black Friday weekend, he said, “Has become a five-day event with consumers spending money in stores, supporting local small businesses, and online with their mobile devices and computers.”

But not everyone will emerge a winner. Traditional department stores have the most to lose.

“Apparel retailers and department stores will likely lose out with big box and off-price taking share of wallet,” Dunn said.

Macy’s is set to report quarterly earnings on Thursday; analyst consensus forecast is $.01, compared to $.27 for the same period last year.

On Tuesday, Kohl’s reported quarterly revenue and earnings per share that were below forecasts, and growth in same-store sales only grew half as much as expected.

“Shoppers will rely heavily on buy-online, pick-up in-store this year,” she said. While most major retailers have offered this option for a few years, Dunn said this year is an inflection point.

“We have now reached mass awareness and widespread adoption. That will benefit larger retailers” such as Walmart and Target, she said.

According to Adobe Analytics, 55 percent of retailers now offer shoppers the option to buy online and pick up their orders in-store.

Adobe also found that price competitiveness is retailers’ top concern in the digital sales channel, and that two-thirds said they expect bigger sales this year.

The International Council of Shopping Centers found that prices — and the perception of a deal — are key motivators for shoppers. In a new survey, ICSC found that more than four in 10 Thanksgiving weekend shoppers say they are incentivized by promotions and loyalty program rewards.

It also found that shoppers are most price sensitive when it comes to electronics and toys, with 37 percent and 31 percent, respectively, saying that they’re less willing to buy merchandise in those categories unless they feel like they’re getting a good deal.

Unfortunately for shoppers and for stores, electronics and toys are two main categories in the crosshairs of President Donald Trump’s next round of tariffs.

Set to go into effect on Dec. 15, these tariffs on roughly $156 billion of goods would hit a significantly higher amount of consumer goods than previous tranches. On Monday, former White House chief economic adviser Gary Cohn told CNBC that if a trade deal is not reached before that deadline, he expects Trump to impose those tariffs, a sentiment also expressed last month by Treasury Secretary Steven Mnuchin.

Although the existing tariffs, a byproduct of the more than year-long trade war the U.S. and China are waging, have damaged domestic agricultural and manufacturing sectors and curbed business capital investment, average Americans have been willing to pick up the slack so far. Consumer spending has contributed the lion’s share of economic momentum in recent months.

This tranche of trade sanctions could change that. “If consumers are aware of future price increases, they will pull forward for bigger ticket purchases,” Dunn said — action that could distort quarterly projections and throw off retailers’ plans.

Dunn warned that the trade war could hit stores in 2020. “Tariffs loom large for retailers,” she said.

Martha C. White is an NBC News contributor who writes about business, finance, and the economy.

Russia’s Gazprom to cut gas supply to the Netherlands – EURACTIV.com