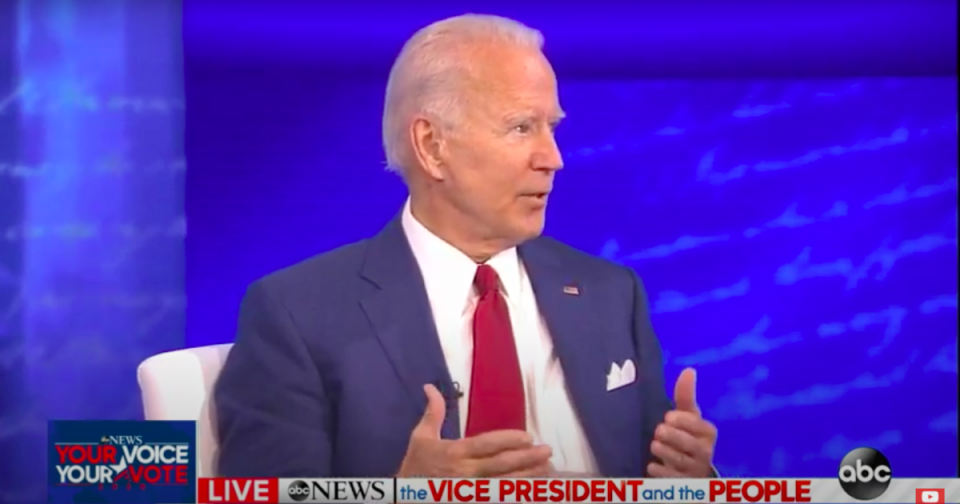 Since the death of Supreme Court Justice Ruth Bader Ginsburg and Donald Trump’s nomination of Amy Coney Barrett to fill her seat, Democratic presidential candidate Joe Biden has repeatedly refused to clarify whether he plans to try to pack the Court in retaliation. The most he would say is that he’s “not a fan” of the idea, referencing his earlier much stronger statements against it. In tonight’s televised town hall event, however, Biden promised to take a position on the issue before the election, and also potentially opened the door to a deal on it:

Critics of the idea refer to it as “packing the court,” and Biden has said previously in his presidential campaign that he is “not a fan” of the idea.

Biden initially repeated that line on Thursday during a town hall event hosted by ABC, but after moderator George Stephanopoulos pressed him, the former vice president went further.

Biden said his position on whether to add seats to the Supreme Court would depend heavily on how Republicans handled the current confirmation process for Judge Amy Coney Barrett to fill the seat left open by the death of Justice Ruth Bader Ginsburg….

Biden said he was looking to see whether “there’s actually real live debate on the floor, if people are really going to be able to have time to go through this” process thoroughly.

His position on adding justices, he said “depends on how much [Senate Republicans] rush this.”

“If they vote [on Barrett’s nomination] before the election, you are open to expanding the court?” Stephanopoulos asked.

“I’m open to considering what happens from that point on,” Biden replied.

“But don’t voters have a right to know” your position on this, Stephanopoulos responded.

“They do and they have a right to know where I stand before they vote,” said Biden.

“So, you’ll come out with a clear position before Election Day?” Stephanopoulos shot back.

“Yes,” Biden said. “It depends on how they handle this.”

It’s good that Biden has decided he must clarify his position before the election. But more importantly, he seemed to indicate he would come out against court packing so long as the Senate holds a “real” debate on Barrett. Notice that he did not say his opposition to court-packing is contingent on the Senate defeating the Barrett nomination, or even holding it in abeyance until such time as the winner of the election is known and can decide whether to go forward with this pick (as per the deal I proposed a few weeks ago). At this point, all he seems to ask for is a “real” debate that enables “thorough” consideration of the nomination.

If so, I say give the man what he wants! GOP senators should reach out to Biden and ask him what he means by a “real” debate. If it’s anything even remotely plausible, they should go ahead and do it.

It’s possible, of course, that Biden just misspoke (though I doubt it), or that he will decide to walk back his position. It could be he really means to endorse something like my earlier proposal, which I am still happy to support, but for which there might not be sufficient backing from Republican senators. But it can’t hurt to explore every possible avenue to avoid the menace of court-packing. A Senate debate tailored to Biden’s specifications (whatever they might be) is a very small price to pay.

It’s entirely possible that Biden genuinely wants to avoid court-packing and would like a face-saving way to take the issue off the table. Earlier in the campaign, he rightly explained that he opposes it because it would predictably be met with destructive retaliation in kind: “We add three justices. Next time around, we lose control, they add three justices. We begin to lose any credibility the court has at all.” Back in 2005, Biden denounced FDR’s 1937 court-packing plan as a dangerous “power grab,” which showed the “corruption” of one of his party’s most iconic presidents. That doesn’t sound like a man with a great desire to blow up the Court. In addition, Biden likely knows court-packing is unpopular, and might prefer to avoid the political risk of supporting it, and instead spend his political capital on other issues.

Sadly, I’m not optimistic that Republican senators will even try to pursue this possibility. They- and Donald Trump—might prefer to keep the court-packing issue on the table in an effort to save their own political hides in what increasing looks like it’s going to be a very bad election for the GOP.

On the upside, however, a deal of this kind doesn’t necessarily require support from Trump or even Senate Majority Leader Mitch McConnell. As with my previous proposal, all it requires is the backing of a handful of key GOP senators (no more than four)—enough to hold up the vote  on Barrett until McConnell agrees to grant Biden’s demand for a “real debate.” Such people could include Susan Collins and Lisa Murkowski (who already oppose holding the vote at this time), Mitt Romney (who is on the outs with Trump anyway), and perhaps Ben Sasse (who just denounced Trump on a variety of issues).  These people have little to lose from breaking with Trump on the issue,  and can potentially save the nation from the risk of court-packing at very little cost to themselves.

Of course none of this is necessary from the standpoint of those who actually welcome court packing, or at least see it as justifiable payback for various Republican sins. As I’ve noted before, Democrats are right to point out that GOP senators are acting in contravention of their own supposed principles announced in 2016, and that a rushed confirmation process is a bad idea. But it’s also the case that Democrats themselves are far from just innocent victims in the ongoing war over judicial nominations.

My objection to court-packing is not that Democrats have no legitimate grievances, but that it would be a major escalation of the conflict that threatens to destroy the institution of judicial review, in a way that more conventional skullduggery over judicial nominations does not. I outlined the reasons for that distinction in previous works on the subject, such as here, here, and here. In those same pieces, I also explained why preserving judicial review is an important goal even in situations where you don’t like the politics and judicial philosophy of the current Supreme Court majority. And, for what it’s worth, I made much the same arguments when a prominent conservative legal scholar proposed that Republicans pack the lower courts, back in 2017.

For reasons already noted, I think it is likely this potential opportunity to forestall court-packing will be lost for lack of trying. But I hope I might be wrong about that.

Will Protests Set Off a Second Viral Wave?