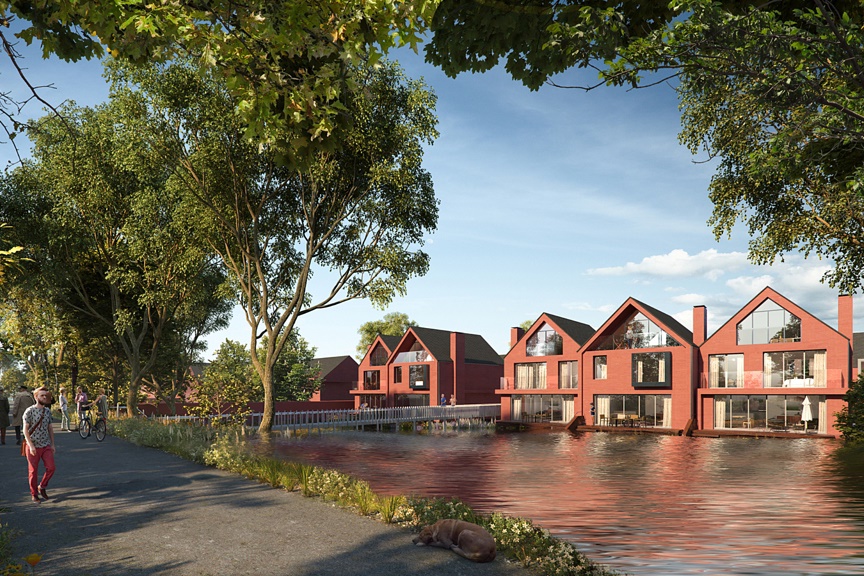 Back in September, we attended ‘The Architecture of Emergency’ conference at the Barbican, a meeting of London-based architects to discuss the climate emergency. But even though the event was advertised with an image of London underwater, flooding and increased flood risk from climate change were not mentioned once.

This month’s flooding emergency at Fishlake in Doncaster highlights how quick we are to blame the failings of infrastructure around flood disasters, yet we fail to acknowledge the architectural problem and potential solutions the construction industry can offer.

Fishlake shows the dangers faced by existing housing in floodplains, but more importantly raises the question of why so many new properties were allowed to be constructed in an area of high risk without suitable flood mitigation measures? The Environment Agency map shows that the town is largely Flood Zone 3 (highest risk of flooding) yet nearly all its new homes have been traditionally built homes. These were constructed using traditional materials which flooded beyond inhabitation within 10 years of their occupation. Is this fair to the unsuspecting homeowner? Greenpeace has further identified proposals for 9,688 homes across the UK located within high-risk areas of flooding.

Flood risk is the biggest danger to our built environment resulting from climate change. Sea level rise, climatic shifts, more intense periods of rainfall mean that flood emergencies such as Fish Lake are only going to keep reoccurring. Floods in the UK have caused over £5 billion in damage since the previous record floods of 2015, yet the ways we deal with them are still the same. The RIBA published its policy note The Value of Flood-resilient Architectural Design back in 2017, highlighting ways we can build smarter and more innovatively to combat this challenge. It emphasised the desperate need to shift from a mentality of disaster recovery to disaster prevention.

Yet there are key issues within government policy that prevent this, coupled with a lack of appetite to effect change. These address new construction, existing buildings and infrastructure.

Historically we have always settled by water with the result that more than one in six homes are at risk from floodwater – a number set to rise dramatically by 2050. Measures such as the NPPF sequential test, are used to discourage the development of new housing within a flood plain. However, this causes issues for the local authorities in flood-prone areas when it comes to delivering housing targets. Presently 10,000 homes a year are built in the floodplain without safety measures and over 300 planning applications are granted permission, despite objections from the Environment Agency on grounds of flood risk. And while flood risk is often seen as problematic, it presents an opportunity to integrate design into the management of water as a method of mitigating damage. 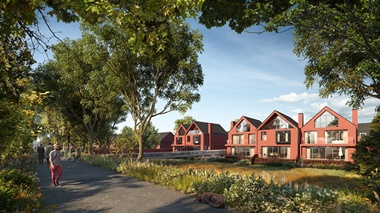 Baca Architects’ Shipston Road housing development in Stratford-upon-Avon has been designed to be resistant to the increasing threat of flooding. The 11 houses are elevated on piles so that all floors are above predicted flood levels. The street is also raised to create a safe high ground. Excessive surface water during heavy rainfall is managed by creating space for water in a floodable playground/garden

But constraints on innovation within local planning authorities prevent new multidisciplinary methodologies from emerging, despite numerous flood-resilient design measures having proven successful. Triggering flood resilient measures as conditions on building on particular classifications of flood zone (as recommended in the RIBA white paper) would help designers integrate these into projects.

Overall, UK homes and towns are now more likely to suffer displacement and structural damage from flooding than damage from fire. So it is concerning that building regulations are not addressing flooding with the same rigour as they are dealing with fire safety. The UK building regulations lack either approved flood-resilient construction methods or material/product testing for water incursion.

One of the main obstacles to safeguarding existing buildings at present results from NPPF revisions (November 2018). Their phraseology overlooked ‘replacement dwellings’, instead qualifying any replacement scheme as ‘new development’. This interpretation, if implemented countrywide, would restrict house owners in flood plains from rebuilding or upgrading their properties to incorporate flood-resilience measures. Presently existing settlements could be compromised in responding to flood events as a consequence of this policy change, extending periods of displacement.

But while governmental policy needs to be reformed to ease the route for flood-safe design to become the norm, it does not stop architects enabling design to build smarter and safer in these areas. Pioneering a multidisciplinary approach, hybridising architecture and infrastructure (flood-resilient design measures and smarter drainage systems) aids in the long-term management of flood risk and offers long-term protection as flood disasters increase in frequency and severity.

Housing demand in flood risk areas, such as Fishlake is not a prerequisite to build irresponsibly. The flood emergencies across the UK should encourage architects, developers and planners to challenge policymakers to think how we can design better in the face of environmental change and safeguard our existing homeowners in the floodplains.