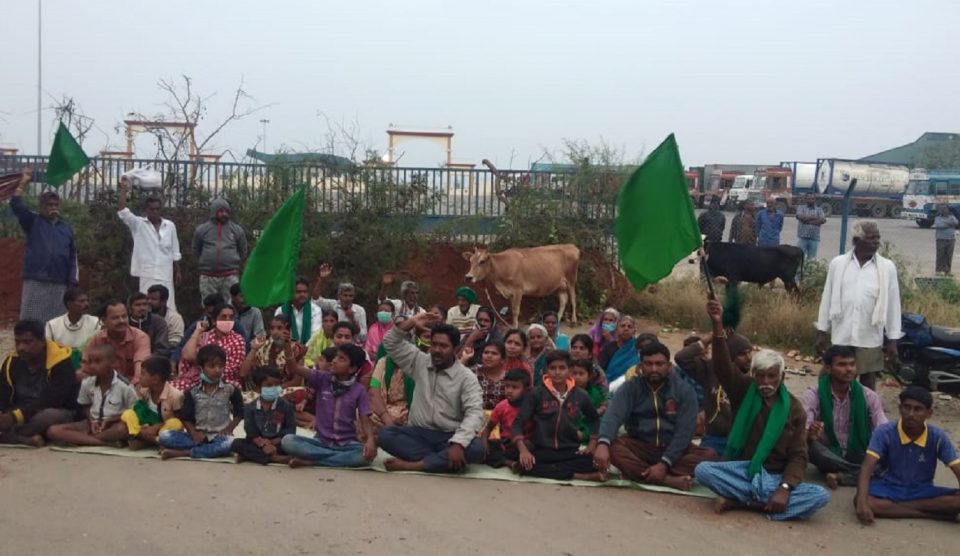 The factory was closed on Monday after farmers claimed their peaceful protests over the last 50 days failed to yield any result.

Operations at an Asian Paints factory in Mysuru’s Nanjangud remained shut on Tuesday as protesting farmers blocked the gates of the factory stopping the entry and exit of workers for the second day. This step from the farmers came after their peaceful protests for more than 50 days were met allegedly yielded no results from the factory management. For close to two months, 95 farmers who were made to part away with their land in Immavu village for the construction of the factory in 2017 have been sitting in protests outside the factory.

Sachin S, who gave away four and a half acres of land for the project said, “If they don’t listen to our demands, water and power supply will be cut off.  We will drop the protest once the management provides us with permanent employment at this very plant.” The land was acquired by state government’s Karnataka Industrial Area Development Board (KIADB) and was leased to the company for 99 years at concessionary rates during the chief ministership of Siddaramaiah.

Another protestor, Premraj M, said, “If we go to the KIADB, they acknowledge that the company has to provide us jobs there but says it can’t act without fresh orders from the government. The government has only cheated us so far, if they were really with us they would have taken necessary action by this time.”

The farmers have been demanding that one family member of each family who lost their land be given a permanent job as agreed upon during the acquisition process. According to that agreement, 900 local residents other than the landowners were also supposed to get jobs in the factory. The family members of the land losers have also been joined by members of trade and farmer outfits like the  All India United Trade Union Congress (AIUTUC) and Karnataka Rajya Raitha Sangha who have lent support to their cause

Speaking on this, Chandrasekhar Meti, AIUTUC, said, “All these 95 families who have lost their land are small farmers and have no other means of livelihood. According to the agreement, the company is supposed to give employment to one member of all these families but they are not complying. But at the same time, they are using government money to get land at Rs 100 for a year, 2.5 MLD of water and electricity at concessionary rates.”

He added, “During the construction of the factory, one member of the land losing families were sent for training by the company with payment and was assured a job. But when the company started functioning one and a half years ago, they only gave only a contractual job that too not in this factory. They were sent for a sanitizer manufacturing unit managed by the company 40 km away. But we all know once the COVID-crisis is over, the demand for sanitizers will go down and the unit may shut down.”

Key stages of Gdansk port’s $1.6bn upgrade will complete in 2021