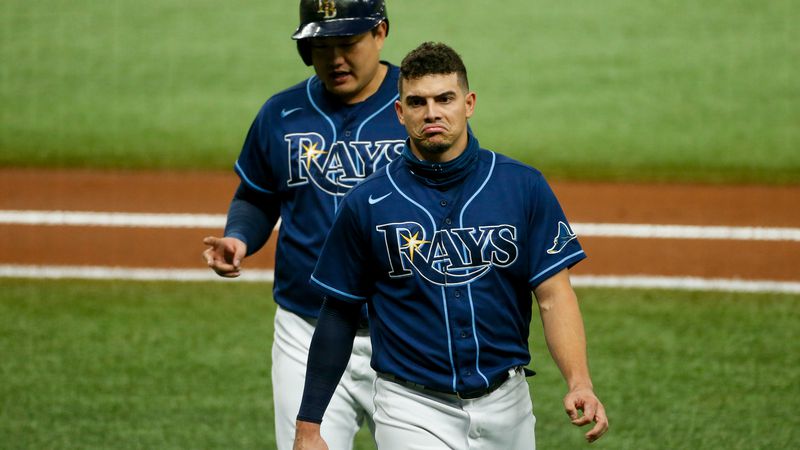 ST. PETERSBURG — Is there something with the lighting at Tropicana Field that’s causing Willy Adames’ extended severe struggles at home?

Adames suggested that was the case Friday in explaining why he is experimenting with wearing glasses with clear and tinted — though noncorrective — lenses when hitting. (On Saturday, he didn’t wear any, going 0-for-3 with a walk against the Red Sox.)

And hitting coach Chad Mottola said Saturday that if the glasses don’t help Adames, they not only would look at the lights — which were installed prior to last season — as a possible cause but would consider adjusting how they were set.

“We hear it all the time from players. This game, there’s ups and downs, and they try to find things wrong and reasons for them,” Mottola said. “However, in Willy’s case, going back to last year, there’s something to it. There’s enough of a sample size we have to start paying attention. We may make an adjustment.”

Centerfielder Kevin Kiermaier, who has been playing at the Trop since 2014, said he hasn’t noticed any issue with the lights and told Adames that.

“He was saying what he thought about the lights, and I said I think it’s as normal as can be out here,” Kiermaier said. “I can’t tell any difference whatsoever.”

Manager Kevin Cash said they are not going to adjust the lights, which obviously could be a risky move because doing so could make it worse for others.

“I don’t foresee us tweaking anything,” Cash said. “Last year with the new lights, we discussed a lot and tried to get it right and consistent. These lights are really, really good. … Hopefully, Willy finds comfort, whether it’s with glasses or eye drops, whatever it may be. It seems like he’s expressed a dryness to his eyes.”

Adding to the storyline, and the mystery, Kiermaier said he’s having issues with dry eyes and has started wearing glasses in the field, which is what sparked Adames’ interest in trying them.

Kiermaier previously used eye drops to combat the issue, which he attributes to the Trop’s air conditioning. But he thought glasses might help, experimented with them last weekend and decided they worked, and broke them out Friday.

“I’m trying to stop that air from hitting my eyes,” Kiermaier said. “I wanted to do it to see if it helped, and it did. Some days are tougher than others. It’s weird.”

Kiermaier said dry eyes aren’t an issue when he’s hitting, at least to this point, and don’t become a problem until the game starts.

“I don’t ever really feel it in batting practice but during the games I don’t know if they crank up the air more,” he said. “Maybe it’s just a mental thing. … Baseball is already hard enough, but it’s a lot harder when you sit here and think that you’re not seeing things quite as good as what you normally do.”

Kiermaier was out of the lineup Saturday and will be again Sunday in an effort to deal with general soreness, though he will be available off the bench. “I’d love to be able to say he’s shut down for two days, but that’s not realistic,” Cash said. “I think he’s pretty achy right now. He’s been playing hard.” Kiermaier said his left knee was initially sore after he made a sliding catch Friday but it’s not a major concern. … Reliever Oliver Drake, sidelined since early August with biceps tendinitis, passed his final test throwing an inning-plus in a simulated game in Port Charlotte and is set to be activated Tuesday, Cash said.

The Rays made major-league history Friday as the first team since at least 1900 to have nine left-handed batters — no switch-hitters — in their lineup. The 11-1 win was a good reward but to formally mark the occasion, the Hall of Fame requested the lineup card. For what it’s worth, per baseball-reference.com, there had been 133 previous games when all the hitters in a team’s lineup, including switch-hitters, were lefties, and 26 times when a team started eight lefty-only swingers, most recently the Rays on Sept. 5 against the Marlins. Technically, the Rays had 10 lefty hitters in the lineup, as pitcher Blake Snell throws and hits lefty.

Outfielder Michael Gigliotti, a 24-year-old who has yet to play above Class A, was acquired from the Royals as the player to be named in the Rule 5-related trade of pitcher Stephen Woods Jr. Gigliotti, a 2017 fourth-round pick, was added to the 60-man player pool; to make room, just-acquired infielder Pedro Martinez was moved to the COVID-19-related injured list as he undergoes intake testing.

The Rays improved to a majors-best 11-4 in one-run games and picked up their AL-most 16th come-from-behind win. … Since the start of 2019, they are 7-0 when Brandon Lowe and Austin Meadows homer in the same game. … Charlie Morton on Sunday makes his third start since returning from the injured list, looking to extend his pitch count to around 70. … Nate Lowe, who hit two homers as the designated hitter on Friday, started at first base Saturday, going 1-for-3. … Blake Snell on Friday won his sixth straight against the Red Sox and extended to six games his streak of allowing them one or fewer runs, matching Walter Johnson (1912-14) and Harry Krause (1909-10).

SA union calls on resignation of Eskom management, board after COO Oberholzer exonerated