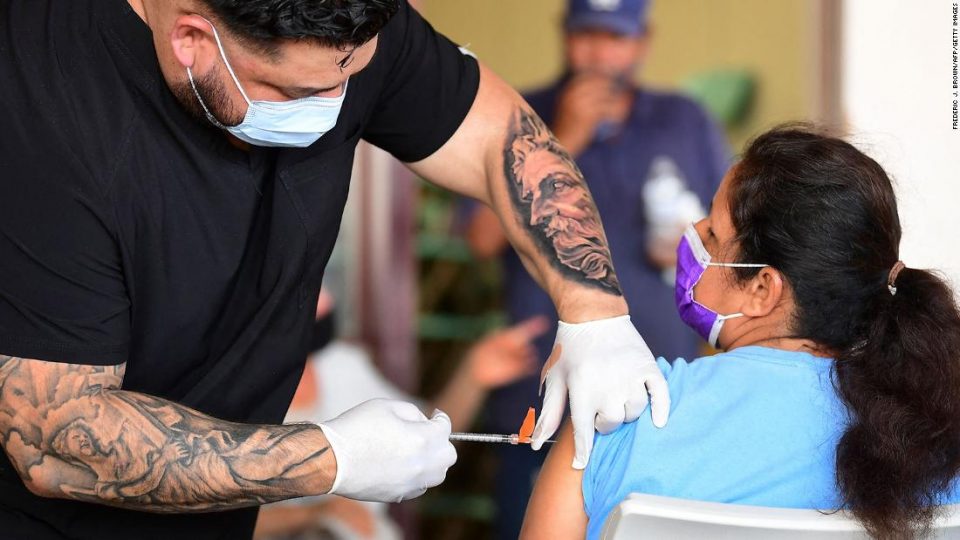 But the task of persuading holdouts, skeptics and the merely disinterested to get their shots is being complicated by the further politicization of the pandemic — a trend that will cost lives and exacerbate an already stark tragedy that has deepened the nation’s ideological estrangement.

There are many reasons why some people won’t take a step that seems a no-brainer to most of the 48% of Americans who are fully inoculated. Health professionals bemoan misinformation, cultural suspicion of vaccines and antipathy to government advice. Some people also think the Covid-19 danger has passed or that they don’t need a shot because they survived the disease. Others fear side-effects from the shots.

But consistent efforts to wring political advantage from the pandemic by leaders like ex-President Donald Trump are continuing while he is out of office and are tarnishing the critical late-stage push to beat Covid-19.

The idea that anyone would perish because they listened to a politician playing into Covid-19 skepticism for their own career advancement, or a conservative media host chasing ratings, is nauseating. But it’s happening — as opportunists cite misinformation or play into preexisting US skepticism of authority.

Even the act of publicizing life-saving vaccines can founder on political divides.

Tennessee’s vaccine chief, for instance, says she was fired after she merely shared a memo explaining state law allowing health care providers to decide whether minors have the capacity to consent to a vaccine themselves.

“The people of Tennessee have been sold out for politics,” the official, Dr. Michelle Fiscus, told CNN.

Dr. Lee Savio Beers, president of the American Academy of Pediatrics, condemned the dismissal of Fiscus and warned the move could harm the health of adolescents, a group in which vaccinations trail other age groups.

“Dr. Fiscus’s termination is the most recent example of a concerning trend of politicizing public health expertise,” Beers said in a statement.

Vaccines in the crossfire

Education has long been a political battleground of the pandemic, with Republicans who wanted blanket state reopenings often clashing with teachers unions, a powerful Democratic constituency.

Now, seven Republican-run states have banned public schools from requiring a Covid-19 vaccine — even though entry to educational systems typically requires kids to have their regular round of shots for infectious diseases, like measles or mumps.

The political map is, meanwhile, becoming the pandemic map. New Covid-19 infections are rising in 45 states, as the Delta variant takes hold. The problem is especially acute in those with low vaccine rates, which are disproportionately Republican.

Vaccines are also being caught in the crossfire at a time when partisan politics infects almost every aspect of daily life.

Some politicians seek quick headlines in a way that will likely add to the human misery by giving holdouts political reasons not to get vaccinated. Reps. Marjorie Taylor Greene of Georgia and Lauren Boebert of Colorado misrepresented the Biden administration’s voluntary vaccine outreach effort as akin to Nazism.

Over the weekend, a potential GOP 2024 candidate, South Dakota Gov. Kristi Noem, sought to supercharge her own political hopes by comparing her own hands-off management of the crisis to efforts by other GOP governors who should have shown more “grit.” Her barbs were apparently aiming at Govs. Greg Abbott of Texas and Ron DeSantis of Florida, rivals for the hearts of the Trump base, whose own efforts to combat Covid-19 have themselves been marked by political expediency.

At the Conservative Political Action Conference in Dallas over the weekend, a massively pro-Trump crowed cheered when a speaker said the government failed to get 90% of the country (sic) “suckered” into getting a vaccine.

In some cases, hospital workers have themselves stoked the political debate over vaccine mandates by opposing a requirement to be inoculated to protect vulnerable patients — as happened in Houston last month. But Surgeon General Dr. Vivek Murthy backed hospital systems with such requirements.

“That’s part of how we protect patients from infection and patients coming into hospitals are often vulnerable,” Murthy told CNN’s “New Day.” “I think that’s a very reasonable thing for hospitals to do.”

When the last miles of the vaccine drive are difficult enough, complications posed by politics are the last thing the public health officials need as they try to prevent needless deaths.

“This is primarily a pandemic of the unvaccinated, and we need to be very clear about that message,” Dr. Chris Pernell, a fellow of the American College of Preventive Medicine who is a public health physician and health equity advocate, told CNN.

Some leading Washington politicians expressed disbelief on Tuesday at the failure of many Republican voters to get vaccinated.

Sen. Mitt Romney of Utah said there had been a “huge human cost to have made vaccinations political.”

“After all, President Trump and his supporters take credit for developing the vaccine,” he said. “Why the heck won’t they take advantage of the vaccine that they received plaudits for having developed it?”

The views of Senate Republican Minority Leader Mitch McConnell are shaped by his bout with one of the most feared diseases in children, poliomyelitis, which has since been eradicated by vaccines.

“I’m a huge fan of vaccinations,” McConnell said. “If you’re a football fan, we’re in the red zone but we’re not in the end zone yet, and we need to keep preaching that getting the vaccine is important.”

McConnell would not be drawn, however, on the question of whether the misinformation spouted by colleagues like Wisconsin Sen. Ron Johnson has something to do with suspicion of vaccines among some GOP base voters.

“I am calling on President Biden to stop blaming everything that happened in the pandemic on Trump,” Adams told CNN’s Wolf Blitzer, defending his former boss’ mishandling of a crisis that the ex-President said would simply “go away” and during which he trashed his own government’s guidance multiple times. Adams was one of those experts who Trump often ignored during his time in office, but the former surgeon general has been a frequent presence in the media in recent months defending his former boss and criticizing Biden and his Covid team for a myriad of reasons.

Adams also called on Trump — who has celebrated his own role in the development of the vaccines but has done little to persuade his supporters to take it — and other Republicans to do more to do more to win over holdouts.

“God has given us a miracle, a true miracle,” he said. “But salvation is only available to those people who accept it.”

Given the hyper politicizing of the pandemic, it’s unlikely that Biden’s pleas to the unvaccinated will have a huge impact, especially since his speeches are rarely covered on conservative media networks.

For many Americans it’s too late, as the Delta variant of coronavirus sweeps through unvaccinated populations, especially in the South. The agony of patients who chose not to get vaccinated but wish too late that they could change their minds is a heavy burden for health care providers.

“Most of the patients I see are regretful that they didn’t get vaccinated,” Missouri emergency physician Dr. Christopher Morrison told CNN’s Jake Tapper on Monday.

Natural catastrophes cause above-average $100 billion in insurance losses in 2020: Aon