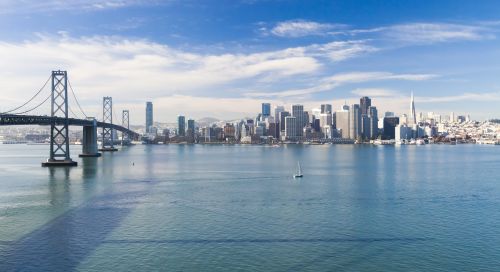 It breaks ground on multiple fronts. First, it’s one of the largest-ever efforts to aggregate distributed energy resources (DERs) at a scale that can help California’s power grid meet its capacity needs.

Then, of course, there are the blackouts. East Bay Community Energy, Peninsula Clean Energy and Silicon Valley Clean Energy are all served by bankrupt utility Pacific Gas & Electric, which has cut off power to millions of its customers over the past two months as part of a statewide fire-prevention regime. PG&E has warned that these blackouts could continue for another 10 years, despite its efforts to reduce their scope and scale over time.

The safety threats from blackouts have outraged state lawmakers and regulators, forcing counties and cities to foot the bill for emergency services to deal with them. And because CCAs’ interests are aligned with the cities and counties they serve, they’re positioned to act far more quickly than utilities to supply their most vulnerable customers with solar-storage systems that can help them survive blackouts.

That’s important, because the CCAs want at least some of these new solar-storage systems to be in place for next year’s fire season.

However, many of the details on how these novel solar-storage deployments will work, and which customers will end up getting them, are still to be determined.

The CCAs have set targets for at least 20 percent of this investment into DERs to be made in low-income and disadvantaged communities. Half of the new systems are to come from single-family homes, and the other half from multifamily and small commercial customers.

“We are really open to creative approaches to this problem,” Ross said. There’s been a lot of interest, and they are “looking forward to seeing what comes back” by the Dec. 23 deadline for proposals.

In an interview with GTM, Ross sketched out some key details of what East Bay Community Energy (EBCE) and its partners are looking for. Here are the highlights.

Is this a first-of-a-kind project, in terms of aggregating solar-storage for grid needs?

It depends on how you look at it.

Certainly this month’s solicitation is the first by a CCA for megawatt-scale DERs, Ross said. But it’s not the first in California.

Southern California Edison, for example, has contracted for hundreds of megawatts of behind-the-meter batteries from Stem and Advanced Microgrid Solutions, load-shifting air conditioning systems from Ice Energy and NRG, and other DERs, as part of a 2-gigawatt procurement to make up for the unexpected closure of the San Onofre nuclear power plant in 2013. And the Demand Response Auction Mechanism pilot project has allowed multiple vendors to aggregate batteries, plug-in electric vehicles, and smart-thermostat-enabled homes and businesses in fulfillment of Resource Adequacy requirements.

But beyond breaking ground for CCAs, the new procurement could happen much faster than previous utility-led efforts to aggregate DERs. For example, beyond Advanced Microgrid Solutions’ systems, which rely on large-scale batteries at a handful of commercial buildings, Southern California Edison’s DER procurements, ordered by the CPUC in 2014, have yet to deliver aggregated DERs to market in advance of a 2021 deadline.

EBCE has done some advance work to prepare for integrating DERs at grid scale, Ross said. This summer, it contracted with solar installer Sunrun to provide 500 kilowatts, or 2 megawatt-hours, of solar-storage capacity to meet the CCAs’ Resource Adequacy requirements, starting in 2022.

What are the models for how behind-the-meter solar-battery systems can serve grid needs?

Right now, EBCE is assuming that its vendors, including Sunrun, will use a mechanism known as Proxy Demand Response (PDR), Ross said. That’s a well-established method for selling the load-reduction capacity from solar-storage systems into the markets run by state grid operator CAISO, having been piloted by behind-the-meter storage startup Stem and PG&E in 2014.

Still, “solar and storage in this program is a bit of a square peg in a round hole,” Ross said.

Because PDR is a demand response program, it can only pay for demand reduction, not for any energy that solar or batteries can provide the grid. It also requires some machinations behind the scenes, like shutting off batteries a certain number of days per week to establish the “baselines” against which that load reduction is measured, that could restrain the systems from providing their full range of services, he said.

That’s why, while EBCE is assuming that PDR will be the preferred mechanism from vendors, “We have made it clear that if vendors have an alternative approach, we’re open to hearing them.”

The California Public Utilities Commission is in the midst of rewriting the rules for how utilities, CCAs and other load-serving entities meet their Resource Adequacy requirements, which is mostly provided by natural-gas-fired peaker plants today. But with more of those plants set to close, California is increasingly looking to solar-plus-storage to meet those needs — including distributed solar-storage.

Could part of the 30 MW procurement come from existing resources?

According to EBCE’s data, about 10 megawatts of behind-the-meter batteries are already interconnected in its Alameda County service territory, about the same amount as EBCE is seeking to procure through the RFP.

“There might be some proposals that come to us that have storage in the pipeline, or even already interconnected,” Ross said. “If that’s the case, we might have some of that enrolled and available to us for the next Resource Adequacy year” in 2020.

Yes, according to Ross.

Back in September, the CPUC ordered the state’s Self-Generation Incentive Program (SGIP) to earmark $100 million from its “equity budget” for low-income and medically vulnerable customers in high-fire-risk parts of the state. That incentive of $1 per watt, which could cover almost the entire cost of a typical solar-battery system, could theoretically apply to qualified customers in Alameda County’s highest-fire-threat areas as well, he said.

And while many of California’s utility-run DER aggregation pilots have excluded SGIP-funded systems, CAISO’s PDR program doesn’t exclude them from participating, he said.

At the same time, $100 million spread across California “is a lot of money — but it’s not that much money when we think about what’s necessary for building resilience, in light of these [public safety power shutoff] events.”

What kind of data can you share with vendors?

CCAs procure large-scale power resources for their customers, but they also have access to their customers’ billing and smart metering data. That’s allowed CCAs to open up data-sharing between customers and third-party vendors in ways that the state’s utilities have been slow to embrace, as we’ve noted in recent coverage of Silicon Valley Clean Energy’s pilot project with UtilityAPI.

This flexibility — combined with the appropriate level of data privacy protections — is playing a role in the joint CCAs’ new procurement, Ross said.

For example, more than 30 vendors so far have accessed the virtual “data room” where the joint CCAs have uploaded about 10,000 representative customer types for vendors to study, each with a combination of smart-meter data and solar-potential data derived from a self-built Google SunRoof API.

These aren’t real customers, Ross emphasized. Instead, they represent typical residential, commercial and public-sector buildings and facilities, in many different locations across the three counties, built on anonymized, yet real, data.

Still, it’s exactly the kind of fine-grained data that vendors will eventually seek out as they decide how to pick the handful of sites to receive solar-storage systems from the far larger list of potential beneficiaries.

“I think it speaks to the flexibility that CCAs can bring to the market, in terms of how we can forward our objectives and vision of developing local resources,” Ross said. “We want to use all the tools in our tool belt.”

US Ecology (NASDAQ:ECOL) Rating Lowered to Hold at ValuEngine